The causes of water scarcity are varied. Some are natural and others are as a result of human activity. The current debate sites the causes as largely deterministic in that scarcity is a result of identifiable cause and effect. However, if water scarcity is the point at which water stress occurs (the point at which various conflicts arise, harvests fail and the like), then there are also less definable sociological and political causes. 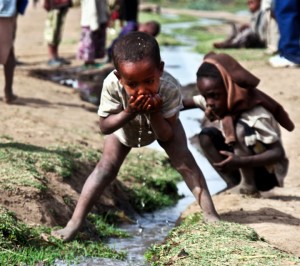 Many of the causes are inter-related and are not easily distinguished. Some of the main physical causes are listed below (see Socio-Political Causes of Water Scarcity)

The main cause of growing water scarcity is the growing demand resulting from population increase. The population growth rate for each country in southern Africa varies between 2.2 and 3.8 %. The major increase in demand is due to the development needs of the growing population and, primarily, from the need to grow sufficient food to feed the increasing population.

The region is already experiencing considerable problems in relation to food security. None of the countries in SADC were able to weather the droughts of the early 1990s without outside assistance or the importing of considerable quantities of cereal. As the demand for food increases with increasing population, the position is reached where even in good years there will be insufficient water to meet the demands. This raises the debate of food security and self-sufficiency. Some countries in the region – notably Botswana – having realised that there is insufficient water available to ensure self-sufficiency in food production and have consequently opted to ensure food security through economic growth. In time of need, food is imported. This constitutes a reliance on “virtual water” which is the water required to produce the food at its point of production rather than needing that water to be available at the point of consumption.

There is a great deal of debate regarding the issue of global climate change. Whilst there is a wide-spread view that global warming is happening, this is yet to be conclusively scientifically proven and the effect of this phenomenon on water resources is unknown. The consensus is that the effect will be to accentuate the extremes with more pronounced droughts and more severe flooding. 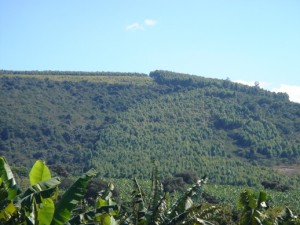 Eucalyptus plantations on the hillside with banana plantation in the foreground: both ‘thirsty crops’ typical of the Lowveld

Land use changes have a variety of impacts on water resources. Whilst reduction of vegetation cover may result in greater run off, it reduces groundwater infiltration and the storage capacity of dams and lakes through siltation. The draining of large scale wetlands or large scale deforestation may change the micro-climate of a region.

The need for improved farming methods and greater understanding of the soil/water interface is evident in many parts of the country. The consequences of poor land management and farming methods is to push communities ever closer to the point of vulnerability where even small changes in conditions can have disastrous effects.

Another issue related to land use is the development of “thirsty” crops, particularly in sensitive areas such as mountain catchments. An example is forestry development. Whilst this can offer employment and a variety of other benefits, there are cases where the runoff from such areas is substantially reduced causing water scarcity for down stream users.

Pollution of water supplies reduces the availability of water for use. This is particularly severe during times of water shortages. In times of plenty the ability of a river to accept a given pollution load is greater because of greater dilution factors. As water becomes more scarce, therefore, rivers and streams become increasingly sensitive to the effects of pollution, as do those human and other living organisms which depend on the water.

Water contamination can result from a variety of causes including agricultural return flows, industry, and domestic uses. Pollution can take the form of both point source and diffuse contamination. Both surface and groundwater are often affected. Destruction of the riverine environment reduces the natural ability of the river to cope with pollution. 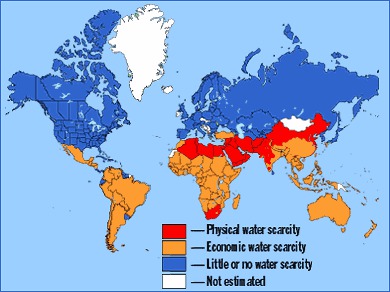 conditions of scarcity. The widespread misconception by many people that there is plenty of water and that the only problem is getting it to the right place at the right time still persists as a residue from the era of supply driven water resources management. Moving to a deliberate and purposeful policy scenario of demand management is urgently required of South Africa and other governments in the SADC region, although this may not be politically palatable in the short term. Reducing and managing the demand for water, enforcing greater efficiency of use and introducing water conservation measures requires policy and legislative attention.

Source: excerpts from The Water Page

Water demand and supply for a region, country or local municipality requires a high standard of management.  Unfortunately, the standard of water demand management  is suspect and suitably qualified staff are severely lacking in South Africa.  An integrated approach that takes all the above causes into account is required; communication between all the local authorities involved is paramount.  The increase in population is seemingly uncontrollable so with every day that passes, more pressure is being applied to our already shaky water management systems.  There are of course certain municipalities that are on top of the situation.  Individuals feel helpless and frustrated with the inefficient, bureaucratic public service that we are currently burdened with.  One way of gaining more control of  your water requirement is to be become more water self-sufficient.  Individuals and businesses can start by saving more water where possible and by recycling water on their properties, e.g. grey water irrigation systems.  Harvesting rain can take you a step further towards water self-sufficiency; once the rainwater harvesting systems are installed, the rain collected off your roof is free water and stored in water tanks.  Water Rhapsody has 16 years of experience in water conservation and is currently number 1 in water saving systems in South Africa.  Contact us for a FREE quote.