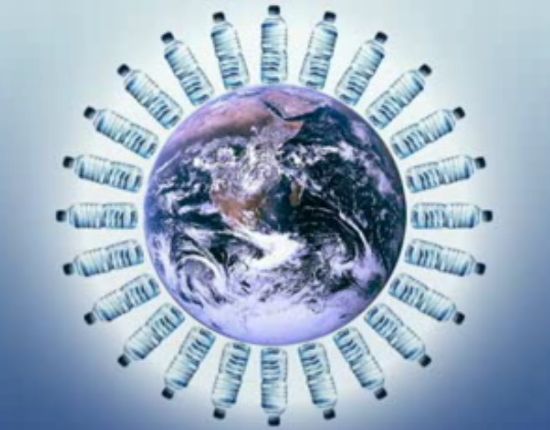 Bottled water consumption, which has more than doubled globally in the last number of years, is a natural resource that is putting a heavy tax the world’s ecosystem.

Even in areas where tap water is safe to drink, demand for bottled water is steadily increasing, producing unnecessary garbage and consuming vast quantities of energy, and the use of plant-based PET bottles is not better either.

The biggest problem is that it is the fact that it is not just the bottles that we must concern ourselves with when it comes to bottled water. The abstraction of water itself is what is causing real grief to the Planet.

Although in the industrial world bottled water is often no healthier than tap water, it can end up costing 10,000 times more. That is as much as 2.50 dollars per liter (10 dollars per gallon), bottled water costs nearly as much if not even more than does gasoline, and this does not compute.

The demand for bottled water has soared in developing countries between 1999 and 2004 with consumption tripling in India and more than doubling in China during that period. This has translated into massive costs in packaging the water, usually in plastic bottles made of polyethylene terephthalate (PET) which is derived from crude oil, and then transporting it by boat, train or on land.

Making bottles to meet  America’s demand for bottled water requires more than 1.5 million barrels of oil annually, enough to fuel some 100,000 US cars for a year. Worldwide, some 2.7 million tons of plastic are used to bottle water each year.

Once the water is consumed, disposing the plastic bottles poses an environmental risk, 86 percent of plastic water bottles in the United States end up as garbage and those buried can take up to 1,000 years to biodegrade. In addition, some 40 percent of the PET bottles deposited for recycling in the United States in 2004 ended up being shipped to China for reprocessing, adding another load of environmental impact to the batch. There are other ways of dealing with this material by now and even oil can be made out of those bottles again but…

The rapid growth in the bottled water industry has also, ironically, led to water shortages in some areas, including India where bottling of Dasani water and other drinks by the Coca-Cola company has caused shortages in more than 50 villages.

It said that while consumers tend to link bottled water with healthy living, tap water can be just as healthy and is subject to more stringent regulations than bottled water in many regions, including Europe and the United States.

In fact, roughly 40 percent of bottled water begins as tap water, and often the only difference is added minerals that have no marked health benefits. So, don’t be deceived, opt for tap, in a reusable bottle.

See Is bottled water eco-friendly? and why you should consider installing water filters for your own safety in Healthy Water.