As Earth enters a period of mass extinction, a study released on Wednesday offers a new reason to 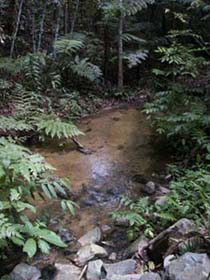 Environmental activists have long warned that waning biodiversity means the loss of such ecological services as stream-cleaning, control of pests and diseases and increased productivity in fisheries.

The latest study, published in the journal Nature, shows how this works, demonstrating that streams that contain more species have better water quality than streams that have fewer.

The species being discussed are microorganisms such as algae that incorporate elements of pollution into their bodies. The more types of algae there are in a stream, each with a minutely different habitat, the better they are collectively at filtering pollution out of the water.

“If we were to maintain streams in their naturally diverse state, these streams that we love for their recreation, for their beauty, for fishing, etc. … have the tangential benefit of cleaning up our water for us,” said Bradley Cardinale, the study’s author.

“One implication (of the study) is, if we let nature do its thing, we don’t have to run around creating very expensive water treatment plants all over the planet,” Cardinale, of the University of Michigan, said by telephone.

To reach his conclusions, Cardinale set up 150 miniature model streams that mimic the varied conditions of natural streams in the United States. He added from one to eight varieties of algae and measured how well the mini-streams got cleaned.

The pollutant they targeted was a nitrogen compound called nitrate, a common by-product of chemical fertilizers that Cardinale called “the world’s single greatest water quality problem.”

Nitrate is responsible for the hypoxic “dead zone” in the Gulf of Mexico, outbreaks of toxic algae and red tides, he said.

The full eight-species mix of algae removed nitrate from streams 4.5 times faster, on average, than a single species alone, according to the study, which was funded by the National Science Foundation.

One species known as filamentous snotty algae does a good job on its own of taking in nitrate and other excess nutrients from stream water. But it smells bad and most other species don’t like to eat it, Cardinale said.

Knowing the benefits of biodiversity is important because scientists see Earth entering a period of mass extinction when as much as 75 percent or more of the life on the planet vanishes forever.

Cardinale said there is little doubt that this trend, largely due to the destruction of places where many different species live, has already begun.

“It’s not necessarily how much we’ve lost already,” he said. “It’s that the rate of extinction is so outrageously high compared to what we know is normal.”

The rates of extinction now are between 100 to 1,000 times faster than normal, and between 30 percent and 50 percent of species could be lost by 2100, Cardinale said.

The very essence of ecosystems lie in their biodiversity and species interactions.  When species, especially keystone species, start disappearing, vital cogs in the ecosystem are removed leading to impaired function. Therefore it comes as no surprise that pollution will be dealt with more efficiently in fully functional ecosystems.