By admin on August 19, 2010 in water and conflict, water crisis, water security

Water scarcity, an increasing reality in Africa, causes societal anxiety over who gets what little is available – and who goes without – and can trigger disorder ad even war. That’s the view of Jennifer Shamalla, country coordinator in Kenya for the Pan African Strategic and Peace Research Group. 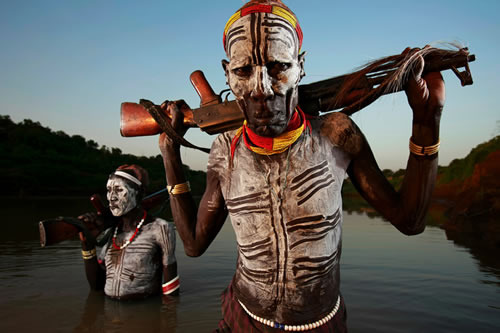 Shamalla will be speaking at defenceWeb’s Peacekeeping Africa 2010 event at Gallagher Estate, Midrand, from August 26 to 27. She notes in slides prepared for the conference water is becoming a scarce commodity as populations increase, climates change and farming as well as industry pollutes water.

A country is considered water scarce when its annual supply of internal renewable water falls below 1000 cubic metres per person (2740 litres per day). “In socio-economic terms, scarcity occurs when the lack of water endangers food production, constrains economic development and jeopardises a country’s natural systems,” she will say.

Using the Nile as a case study, she will argue that current disagreements over water usage may lead to conflict. Egypt is currently the largest consumer of Nile water and is the main beneficiary of a 1929 treaty which allows it to take 55.5 billion cubic metres of water each year, or 87% of the White and Blue Nile’s flow. By contrast, Sudan may draw 18.5 billion cubic metres.

Under the 1929 treaty, Egypt has powers over upstream projects: The Nile Waters Agreement of 1929 states that no country in the Nile basin should undertake any works on the Nile, or its tributaries, without Egypt’s express permission. This gives Egypt a veto over for example the building of dams on numerous rivers in Kenya, Burundi, Rwanda, Tanzania, Ethiopia and by implication over agriculture, industry and infrastructure and basic services such as drinking water and electricity in these countries.

Shamalla will further note that Egypt considers Nile water supply a national security matter and the country has stated that any attempt to divert the Nile would be met by force. “We depend upon the Nile 100 percent in our life, so if anyone, at any moment, thinks of depriving us of our life we shall never hesitate to go to war”, President Anwar Sadat said in 1978.

Water is taken for granted in many of the richer nations but water scarcity is already triggering small-scale conflicts in many poorer nations. War and water is likely to become interlinked as the human population grows beyond sustainable levels.  In the future, access to water or ownership of water may become a measure of a person’s or nation’s wealth.  Governments will be able to control the masses through water supply and allocation.  The good news is that private entities need not rely on government for this life-giving resource.  Through a combination of water conservation and water collection, it is possible to become water self-sufficient (and to obtain free water).  A rooftop is an ideal collector for rainwater harvesting.  Rainwater harvesting systems can consist of a simple downpipe off a gutter that diverts the rain water into a rainwater tank (normal water tanks such as JoJo tanks can be used) or more complex systems that integrate rainwater with existing water supply.  Water Rhapsody’s rainwater harvesting system allows for the water tanks to be placed away from the roof so they are hidden from view (important where certain rules apply such as on eco-estates and upmarket country estates).  The Water Rhapsody ‘Grand Opus’ rainwater system is designed to augment of even supplant the existing water supply (depends on rooftop area, local rainfall patterns and storage capacity of water tanks or water reservoirs).  The Grand Opus rainwater system can be switched from rainwater back to municipal/borehole water at the flick of a switch.  Rainwater harvesting systems and grey water recycling systems are relatively inexpensive compared to the cost of a house and amortize themselves within a few years.  Our water systems can be retrofitted to older buildings or built into new buildings.  The latter option is preferred as it reduces cost and allows for optimal efficiency.  Apart from water scarcity issues in South Africa, energy supply shortfalls are an immediate threat (Eskom has admitted that it will not be able to supply enough power).  This is why Water Rhapsody and Yes Solar have joined forces so that we can provide solar energy solutions to individual houses and businesses.  Yes Solar supplies high quality, German-made solar water heating systems (can save between 30% and 50% of your electricity bills) that qualify for the Eskom renewable energy rebate scheme.  Now is the time to invest in your future water security and to ensure that you are protected from the proposed drastic Eskom tariff increases.  Contact us now for a free, no obligations quote.