The Olifants River in Mpumulanga is highly contaminated, researchers say.

Microbiologist at the Council for Scientific and Industrial Research (CSIR), Martella du Preez, said all the sites along the river showed mild to heavy microbial contamination most likely due to untreated, or poorly-treated, sewage flowing into it. 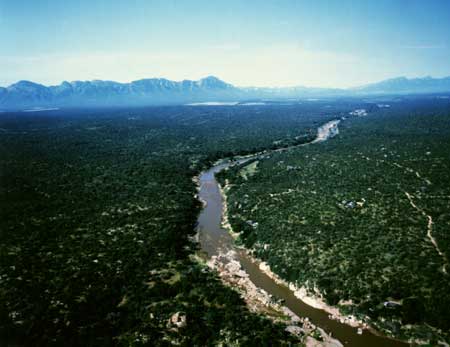 The samples were contaminated by micro-organisms in the form of bacteria, viruses and protozoan parasites as well as norovirus and enterovirus (diarrhoea).

The E. coli bacteria, an indicator of faecal matter in water, exceeded the guideline values indicating a high risk for diarrhoea.  She said local communities who relied on the Olifants River for drinking and washing water should be provided with alternative sources of water.  They should be prevented from taking water directly from heavily contaminated sites such as the Olifants River below the Riverview waste water and sewage treatment plant in Witbank, as well as the stretch along the informal settlement next to the Klipspruit before it enters the main stream of the Olifants.

The Olifants River Forum commissioned the CSIR in 2009 to conduct a study on the progressive eutrophication – when water receives excessive nutrients that stimulate excessive plant growth – and chemical pollution of the river and the implications for aquatic ecosystem health and human health.

According to the forum’s chairperson Vik Cogho, they would continue to work closely with industry, the local authorities and farmers to address some of the immediate problems facing the Olifants River and Loskop Dam.  Cogho called on local communities to come together to help with the improvement and conservation of the river.

“If we don’t work together to improve the river’s water quality before it flows into Loskop Dam, the consequences will be too dire even to consider…,” he said.

Researchers said they had found pansteatitis, a disease caused by the depletion of anti-oxidants, in Largescale yellowfish caught in the upper catchment of the river.  According to Drs Jan Myburgh and Johan Steyl from the department of paraclinical sciences, faculty of veterinary science at the University of Pretoria, this was the first report of pansteatitis in fish from the upper Olifants River.

“Our research has shown that these crocodile mortalities are now a recurrent problem that is likely to occur every winter. If mortalities continue at this rate, there will be very few crocodiles in the lower Olifants and Letaba rivers by 2010,” added Mr Pienaar.

During May 2008, crocodiles in the Olifants River gorge in the Kruger National Park started dying, with a mortality rate of 20 crocodiles per week reached during June and July. A total of 170 crocodile carcasses had been recorded by late November 2008. Post mortem examinations revealed yellow-orange coloured, hardened fat in the tails and abdomen – a condition known as pansteatitis.

Researchers analysed water, sediments, fish and crocodile tissue samples for potential toxins and chemical compounds at laboratories, both locally and around the world, and although many heavy metals, agricultural pesticides, fertilizers, organic waste and persistent organic pollutants (POPs) were detected, none were found to be above levels where adverse effects are expected and were therefore not individually responsible for poisoning the crocodiles.

If a river is polluted upstream it obviously is polluted at any point downstream.  The Olifants River flows into Limpopo Province and therefore cities such as Phalaborwa are also affected.  The same river flows into the Limpopo River which flows through Mozambique into the Indian Ocean.  Thus what was a local pollution issue in the upper Olifants River, now has become a problem of national (South Africa) and international (Mozambique, Indian Ocean) importance.  Rural communities along these rivers usually don’t know about the dangers of drinking polluted water and often have no choice anyway.  Many municipal sewage treatment plants in South Africa are operating at dangerous, over-capacity levels.  An easy method of reducing the load on sewage plants is by reducing or eliminating grey water contribution to sewage flow.  This can be accomplished by reusing household gray water for irrigation or for flushing toilets.  Water Rhapsody water conservation systems are innovative, environmentally friendly systems that save water and save the environment.  Should you reside in the Limpopo Lowveld and require bio-monitoring and water quality testing, please contact Integrated Conservation Services (who also offer a multitude of other environmental services).

Competing for Limpopo Water
What is Water Neutrality?