Want to Save Energy? We Need to Save Water Too!

ESIGODINI, Zimbabwe (Alertnet) – For the smallholder farmers in arid Esigodini, just south of Bulawayo, the heavy downpours that have hit the area in recent months have been a godsend. 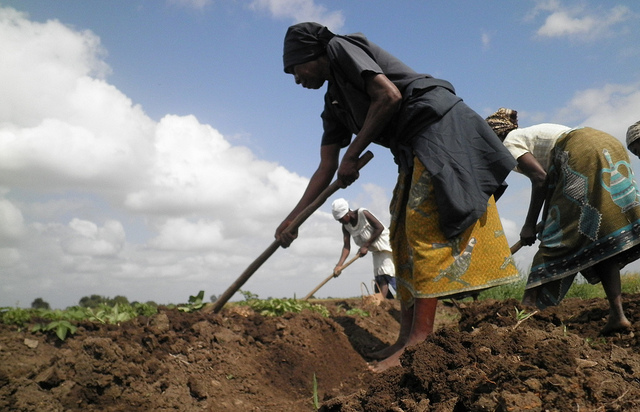 “We have not seen this much rain in years,” said farmer Brenda Zulu.

The rains first came in January, destroying homes and claiming lives as people were caught unawares. But farmers struggling to grow crops and raise livestock in the traditionally low-rainfall area surrounding Zimbabwe’s second-largest city realised that if they could find a way to harness the deluge, they could use it to help their thirsty farms.

So the villagers grouped together and started digging.

“It was a community suggestion that we dig the earth to trap the water,” said Zulu as she scooped water from an artificial pond her community created. The size of a small tennis court, the pond now serves as a reservoir for scores of farms in the area.

She uses the water to water her kitchen garden and fill a trough for her small herd of livestock. “It seems to be helping a lot,” she said.

Nobody knows exactly how much water the makeshift ponds hold, but Zulu said her communities believes theirs should have enough to  sustain their small farms for the next few months.

With no access to groundwater and no sign of help from the local authorities to deal with worsening shortages, Zulu and her fellow villagers feel that making their own ponds could be the only answer.

“It was already a depressed gulley and we extended it as no one seems to offer solutions for our water problems,” she said. “We did this ourselves.”

For the farmers in Esigodini, who have experienced successive years of drought, building a lake was an act of desperation, driven by the fear of not knowing when, or how much, rain will next fall.

But experts say Zimbabweans can learn to adapt to changing and increasingly severe weather patterns.

Sobona Mtisi, a climate change researcher with the Overseas Development Institute, a London-based research group, said rainfall in Zimbabwe does appear to follow a pattern.

By understanding that pattern, people should be able to prepare for the droughts and floods that have been afflicting the country, Mtisi said.

“Most villagers in the flood-prone areas are aware of the fact that in the past few decades the frequency and intensity of floods has been increasing,” Mtisi said. “Similarly, policymakers are aware of the increased frequency of droughts and floods in Zimbabwe.”

From 2000 to 2010, Zimbabwe had four floods, the researcher said. “This means that we have a flood (on average) every 2.5 years,” he says. “The evidence which should form the basis for communities and policymakers to understand the shifts in climate is there and irrefutable.”

But until someone figures out how to use that evidence to help Zimbabwe’s smallholder farmers deal with the cycle of drought and flood, they will look for ways to help themselves — such as digging ponds and lakes.

“We have to find ways to trap the water not just with our small buckets,” said Sithabile Fuzwayo, another Esigodini smallholder. “Water is a serious problem and as long no one comes along to help, we will seek our own solutions.”

Rainwater harvesting is nothing new among many communities in Zimbabwe, but it is usually done using small containers that are inadequate to meet longer-term needs of farmers.

The act of investing labour into digging the ground to trap the coming rain is an innovative step — one that more famers might decide they have to take.

Despite the heavy downpours this season in normally low-rainfall areas around Bulawayo, the Zimbabwe National Water Authority (Zinwa) says not enough of the water has made it into supply dams, due to blockages in drainage systems.

For farmers like Zulu, Fuzwayo and others, efforts to trap the water themselves seem the only viable solution.

“It shows just how poorly the rain problem has been dealt with at local levels, in ways that could in fact bring catastrophic results,” warnedGilmore Sithole, an environmentalist and agricultural extension officer with the country’s agriculture ministry. “We just cannot have people digging up the ground without proper monitoring. We have to imagine what kind of gaping holes will be left in the countryside when the dry season sets in.”

But like other farmers, Zulu isn’t thinking about the long-term risks of her pond. Her main concern is having enough water to keep her garden and livestock alive.

According to the Zimbabwe Meteorological Services Department, the wet spell in the traditionally dry parts of the country’s south is expected to continue into March.

This is the time when farmers should be preparing to harvest, and the continuing rainfall could damage crops. But that is a risk the farmers are willing to take if it means the chance to trap more water — and feel a little less helpless in the face of Zimbabwe’s unpredictable weather.

“We no longer have any knowledge of the rain cycle,” Zulu said. “But we welcome all the rain we can get.”

Source: AlertNet (by Madalitso Mwando, who is a journalist based in Harare, Zimbabwe).

While harvesting rainwater using earth depressions and impoundments must be implemented carefully in order not to damage the environment, rooftop rainwater harvesting has only good effects on the environment.  Rooftop rainwater harvesting, especially in urban areas, reduces stormwater runoff and pollution of local waterways.  Rainwater tanks vary from small tanks of a few hundred litre to large tanks of many thousands of litres such as JoJo Tanks’ 10000 litre, 15000 litre and 20000 litre water tanks.  Click on the links below to view the wide range of jojo water tanks, jojo rain water tanks, jojo tank stands and other high quality, guaranteed JoJo Tanks products.