Energy, water and land are being squandered as the world throws out as much as half the food it produces. 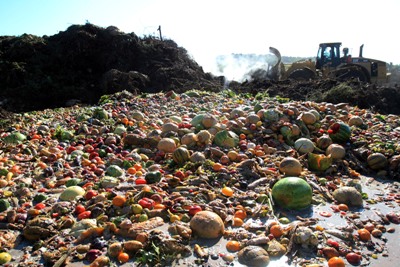 A report, Global Food: Waste Not Want Not, by the UK’s Institute of Mechanical Engineers (IMechE) has found that 30-50%, or 1.2-2 billion tonnes, of produced food is wasted by poor storage, bad distribution and exacting quality standards in the developed world.

“As water, land and energy resources come under increasing pressure from competing human demands, engineers have a crucial role to play in preventing food loss and waste by developing more efficient ways of growing, transporting and storing foods,” said Dr Tim Fox, head of energy and environment at the Institution of Mechanical Engineers.

“But in order for this to happen Governments, development agencies and organisation like the UN must work together to help change people’s mindsets on waste and discourage wasteful practices by farmers, food producers, supermarkets and consumers.”

With the global population set to top 9 billion with scarce water and energy resources and climate change making conditions for farmers even harder, cutting waste could help to reduce surging food prices.

“Most people don’t realise that food waste is not only a moral conundrum  wasting food when so many people are hungry, but an environmental problem as well,” Danielle Nierenberg, co-founder of the Food Tank told RTCC.

“We forget that all of the resources and ingredients, that go into making food,artificial fertilizer and other agrochemicals, water, soil fertility, fossil fuel energy, etc, are also wasted when we either food is lost because of pests, disease, or improper storage or because we simply throw it away.”

Water is also under increasing demand from the growing populations, industrialising nations and to fulfill an expanding appetite for hydropower.

Hydropower rich Brazil is currently facing a water and energy crisis following a dry summer. India recently announced plans to build 292 dams in the Himalaya to solve its energy crisis but there are concerns the resulting effect on water supplies could be worse.

The IMechE report, notes that just one hectare can provide enough rice or potato for 22 people a year.

As nations develop, the appetite for meat also increase placing additional pressures on the amount of land required to feed the population.

According to the IMechE report, producing 1 calorie of food requires 7-10 calories of energy input. As agriculture becomes increasingly mechanised this figure could rise.

Water is linked to virtually everything we do on this planet and so widespread water conservation and awareness is key solving the water crisis.  How many people think about water conservation when they discard excess food?  Water and energy are also inextricably linked- wasting energy amounts to wasting water too.  Water conservation efforts should start at home; the benefits of saving water are not only environmental but saving water saves money too.  The installation a rainwater system with a water tank or rainwater tank can save a household or business surprising amounts on their water bills (and ensure that water is available in the event of a water suppy cut, especially important in many towns and cities in water scarce South Africa).  Click on the links below to view the wide range of plastic water tanks, rain water tanks, tank stands and other quality products made in South Africa by JoJo Tanks.