Water: The next challenge for China’s new leadership?

Now that the 18th Communist Party Congress is over, China’s new leadership team turns its attention to tackling the problem of the country’s slowing economy. 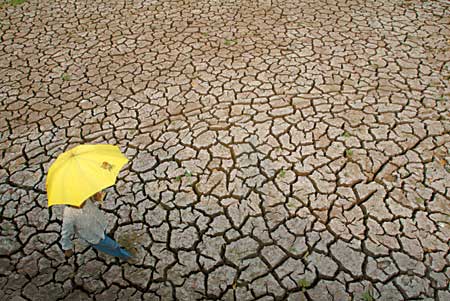 China faces a number of challenges, including dependence on exports and weak domestic consumption, but one of the most pressing issues is a risk of severe water shortages.

A map from research firm Maplecroft shows that four Chinese provinces are at “extreme risk” of lacking enough water. China contains only 7 percent of the world’s potable water but must feed almost 20 percent of the world’s population, according to the United Nations Food and Agriculture Organization. Meanwhile, its people are living longer and eating more, especially more water-intensive food, such as meat and dairy.

Writing at CNN, Geoff Hiscock points out that the country’s precarious water situation makes it less able to withstand shocks like inflation, droughts or other natural disasters:

The speed of the middle class consumption boom is so swift that unless China takes decisive steps soon to re-engineer its food and water usage patterns and supply chains, and commits to a massive greening of its industrial landscape, it risks social dislocation that could undo much of its progress.

The situation so serious that it has the potential to further limit economic growth by constraining business and hampering agricultural outputs, Maplecroft writes.

Resulting reductions in crop harvests in these countries will also negatively impact local food supplies and global food prices, while the socio-economic impacts of water shortages, especially in India and China, have the potential to create unrest and affect stability, as populations and business compete for dwindling supplies.

In north and eastern China, home to Beijing, Tianjin and Shanghai, water use has outpaced supply, prompting the construction of the South-to-North Water Diversion Project, which aims to transfer water from the wet south to the dry north. However, others have said the water along the project’s path is so contaminated by pollution that it’s barely usable, even after treatment.

Earlier this year, the environmental organization Greenpeace released a study implicating China’s reliance on coal power for its water problems. The group has an obvious agenda, but as Beijing plans to build 16 coal-fired power stations in four provinces by 2015, they could end up consuming billions more cubic meters of water.

Unfortunately, as The Washington Post’s William Wan and Keith Richburg report, some among China’s new cadre of leaders aren’t the most savvy when it comes to handling tough economic problems:

Incoming premier Li Keqiang has economic training, however many economists were rooting for a more prominent role for Wang Qishan, who has deep experience and understanding of Western economies and leaders. Instead – in part out of fear that Wang’s expertise might undermine Li — Zhang Gaoli, former party chief of Tianjin, appears to have the economic portfolio.

Hopefully China’s new leaders will pay more attention to the environment and realise that without healthy ecosystems, their economy will suffer.  Water is a major factor in many big industries; water shortages can hamper a country’s development significantly.  In South Africa, we also face severe water shortages with the same negative effects on our economy and development.  Water conservation measures must be embraced from the individual level right up to the corporate level if we are to avoid the worst consequences of the water crisis.