The Nkhensani Hospital in Giyani, Limpopo, is affected by a water crisis in the town after the Nsami Dam started drying up, according to a report on Monday. 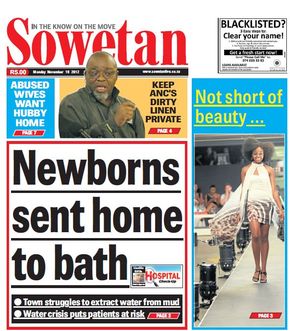 The Sowetan reported the hospital had been relying on the municipality to deliver water in water tanks.

A nurse, who asked not to be named, told the newspaper that the hospital had not had water in three months.

“We can’t even wash newborn babies and unfortunately most of them get discharged still covered in blood,” the nurse said.

“We are extremely worried because infection control is compromised and there’s little we can do.”

The hospital’s CEO refused to comment. While the Limpopo health department spokeswoman Sinenhlanhla Gumede said the municipality needed to supply the hospital with water.

“Water is not a competency of the health department, so we are working closely with the municipality to ensure that we have sufficient water tank supplies while they try to solve the water crisis,” Gumede said.

Mopani district municipality spokesman Neil Shikwambani said the equipment needed to use borehole supplies in the Nsami Dam were either broken or stolen. He said they wanted to extract water from the mud and purify it, but the pressure was too low.

“We are looking at using fixed water tanks to be located at specific spots… It’s a dire situation,” he told the Sowetan.

This is a not uncommon scenario in many of South Africa’s rural areas.  The combination of drought, lack of infrastructure maintenance, incompetent staff and corrupt officials has resulted in many local water and sewerage services becoming virtually useless.  Hospitals are another great candidate for rainwater harvesting as they always have large roof surface areas ideal for collecting huge quantities of rainfall.  There is also generally much space around rural hospitals for locating the water tanks for rainwater storage.  A hospital such as Nkhensani could easily harvest enough rainwater for essential functions (such as washing newborn babies!) with a minimal amount of effort and cost (a few 10000 litre or 15000 litre water tanks would serve to capture tonnes of rainwater).  While local government hopefully begins to progress in a positive direction, institutions such as hospitals should not totally rely on their municipalities for water supply and should gain some degree of water self-sufficiency by harvesting rainwater and adopting other water conservation measures wherever possible.