The worst drought in more than half a century baked more than two thirds of the continental United States this summer and its harsh effects continue to plague the parched cities and towns of the Great Plains. 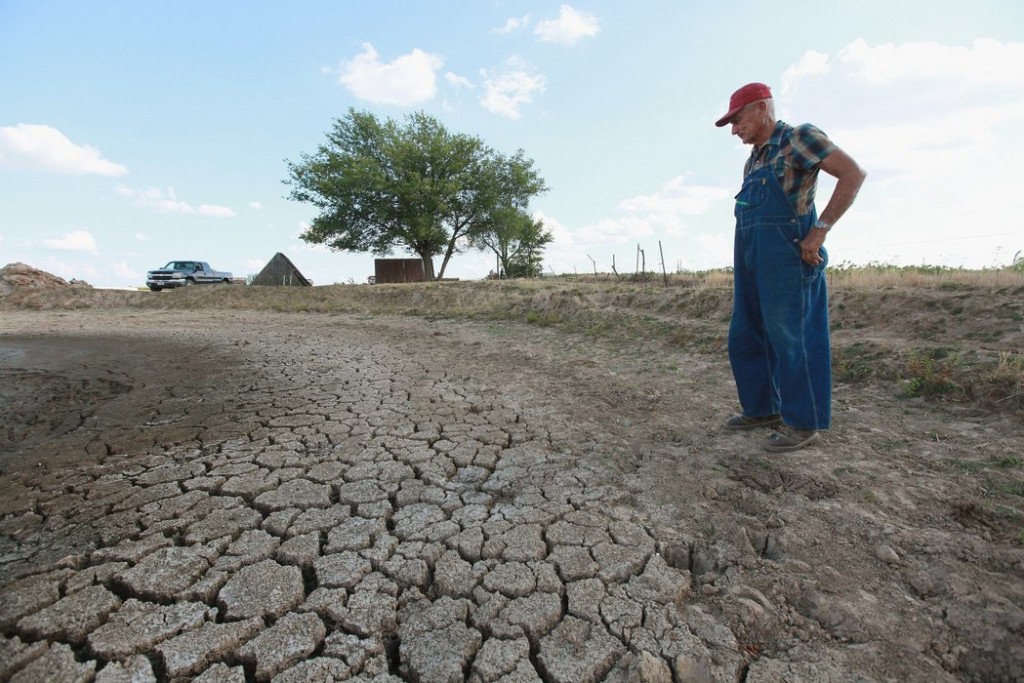 Ask the 94,000 people of San Angelo, Texas who are running out of water. Fast.

The city — once known as “the oasis” of dry west Texas — now says it only has enough water supplies to last one more year. On Oct. 16, it will enforce its highest level of emergency measures to save its water supply.

The city will also push up usage fees aiming to cut water use by at least 30 percent as it awaits a new water pipeline now under construction. The pipeline will not be available for use until mid-2013 or later.

Protests from local businesses has prompted the city to consider some exceptions but those may be temporary, officials say.

“We need to get back to meeting just basic needs,” said Will Wilde, water utilities director for San Angelo. “We don’t want to put people out of business. It may come to that if conditions get extreme in the future. Do you want to keep a green lawn or do you want water to drink?”

Despite recent rains the drought continues to expand, with severe or worse drought affecting 83.80 percent of the High Plains region, up from 82.81 percent the prior week, according to the weekly Drought Monitor on Thursday.

More than half of Texas is having a drought that is rated severe or worse, and more than 95 percent of Oklahoma is rated as experiencing the more serious category of extreme drought.

The entire state of Kansas is rated in severe drought, with 88 percent of the state falling into the more serious “extreme” drought category. The designation comes as farmers struggle to plant winter wheat.

NOT A DUST BOWL – YET

As the summer’s historic drought extends into autumn, communities are seeing rising signs of water shortages. Population growth and decades of heavy pumping of water supplies by both public and private users have tapped resources beyond their limits.

Years of heavy irrigation and water use for livestock in Plains states has depleted groundwater supplies, with agriculture accounting for 70 percent of all fresh water use.

Years of low rainfall and high heat have accelerated evaporation and depletion of lakes and reservoirs.

It all adds up to what many call a widening “water emergency.”

In Kansas, water levels in underground aquifers are dropping so quickly that Gov. Sam Brownback has called for the state’s water experts to convene in October and consider ways to best conserve what the state has.

Oklahoma is so concerned about water supply shortages and groundwater depletions that legislators passed a law this year providing grant money and incentives to make more efficient use of water on farms, in businesses and homes – and to encourage increased processing of undrinkable “brackish” water.

In Colorado, studies predict a chain of Colorado River reservoirs that serve about 30 million people has a 50 percent chance of running dry in the next 45 years. This will affect seven states — Arizona, California, New Mexico, Nevada, Utah, Wyoming and Colorado. Longer and more frequent droughts, decreases in snowpack, and increasing demand are key factors.

“Over the last couple of years, people have started realizing that what they thought they had in terms of supply is not materializing. They are really panicking,” said Barney Austin, director of hydrologic services for INTERA Inc., an Austin, Texas-based geoscience and engineering consulting firm.

Overall, more than 30 U.S. states are anticipating water shortages by 2013, according to a report by the Environmental Protection Agency.

The situation in Texas is particularly dire after the state suffered through the worst drought in its history in 2011 and then was hit with severe drought again this summer.

With no underground aquifer to rely on, San Angelo gets its water mainly from the Twin Buttes Reservoir and nearby lakes. The reservoir holds almost 58 billion gallons when full, but is at only 2.5 percent of its capacity, authorities said.

The water in another key supply, the O.H. Ivie reservoir, is expected to run out in June 2013.

The city is building a 60-mile, $120 million pipeline to connect it to a large underground water supply known as the Hickory well field and building a treatment plant to bring the water into drinking standards.

But the project, partly funded by sales taxes, won’t be completed until mid-2013 or later.

“We knew we needed it,” Wilde said of the pipeline. “But we weren’t planning on needing it so soon. The drought changed that planning. Right now it is a race against the clock.”

Ground water resources are being depleted globally and increasingly in South Africa.  Groundwater reserves should be used sparingly as a supplementary water source, not as a sole source of water, as is happening in many cases.  Many groundwater wells or aquifers are ancient bodies of water trapped due to certain geological formations and many are not recharged naturally.  At best, aquifers take a very long time to be recharged and should be carefully managed and monitored.  A good supplementary source of free water can be obtained by rainwater harvesting; even a single rainfall event in an otherwise dry area can result in enormous quantities of collected rainwater.  The amount of rain water that can be harvested is dependent on roof area and storage capacity – space available for water tanks (above ground tanks or underground tanks).  Many industries have large warehouses or factories that have ideal rainwater collection rooftops.

In South Africa, JoJo Tanks can supply water tanks and other products such as septic tanks, chemical tanks and tank stands, for every need.  Click on the links below to find the right water tank or other JoJo Tanks product for your requirements.