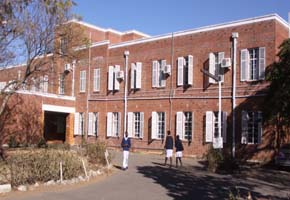 Mpilo Central Hospital in Bulawayo has been hit by a critical shortage of water, a development which has resulted in the referral centre shutting down its operating theatre.

Sources at the country’s major health referral centre attributed the water crisis to pipe bursts due to the water rationing introduced by the Bulawayo city council two weeks ago.

“The hospital has been without water since Friday last week. One of the major pipes which supplies water to the institution burst in Mzilikazi high density suburb. The hospital is not doing any operations until the water situation is addressed,” said a source at the hospital who refused to be named for fear of victimisation.

The source said relatives of admitted patients have been asked to bring water in containers for the patients. The hospital has got one functioning borehole.

Since the city council introduced tight water rationing two weeks ago, there has been an increase in the number of pipe bursts due to fluctuating water pressure.

According to council’s spokesperson, Nesisa Mpofu, 41 pipe bursts have been reported in the city since last week.

Some critical institutions and industries which are outside the water rationing schedule have experienced water shortages due to the pipe bursts.

Institutions such as hospitals, schools and other civic centres often have very large roof surface areas.  This makes these buildings ideal for rooftop rainwater harvesting.  Hospitals especially, should have an alternative supply of water- a series of rain water tanks for storing water would be able to provide emergency supplies of water (even for drinking if properly filtered).  Recently, there have been a number of water supply cuts in towns and cities in South Africa (e.g. Port Elizabeth, Carolina and Kimberly).  Businesses and households with water tanks installed are able to store municipal water and/or rainwater for times such as these.