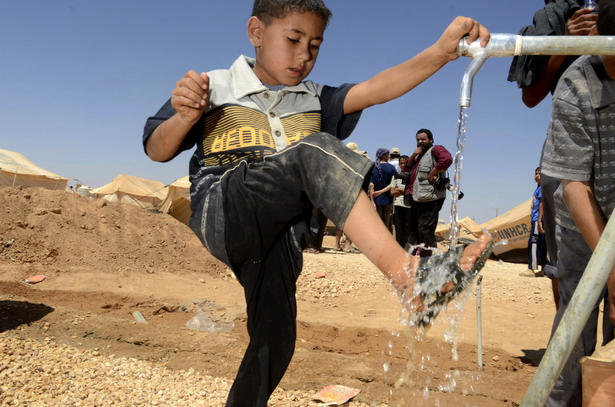 A young boy washes his feet at the Zaatari refugee camp in Jordan. Even though the camp is in the desert, administrators say refugees are using too much water and must cut back.

ZAATARI REFUGEE CAMP, JORDAN—Bara’a Sala Majaresh survived months of Syrian artillery shelling in her hometown of Daraa. She dodged the crossfire between Syrian soldiers and rebels, and navigated a border to reach this refugee camp in northern Jordan.

Just when Majaresh, a 25-year-old mother of two, thought it was safe to breathe a sigh of relief, she faces a new crisis: she’s about to be told to cut back on her water use.

Administrators of the Zaatari camp say that as the number of refugees here continues to climb in coming weeks, it will be increasingly difficult to keep pace with the demand for water.

The camp, which opened July 29, is currently using 51.2 litres per person per day for drinking, cooking and cleaning, said Stephan Mack, a program manager with Germany’s federal agency for technical relief. By contrast, the average Jordanian uses about 40 litres.

On one hand, it’s little wonder the refugees are using so much water. The blazing afternoon sun doesn’t so much heat the camp as fry it to a crisp. While every few minutes, mini-cyclones wash across the landscape, covering everything with a layer of sand and grit.

Some days, the drinking water that is stored in huge plastic bladders and surrounded by sandbags approaches the boiling point. Several refugees said they had been scalded when they drank from the taps.

“This is hell,” Majaresh said, wiping dirt from the face of her 18-month-old toddler. “It’s not living. You look around, how am I supposed to stop using so much water? It’s crazy.”

The goal is to reduce water use to between 35 to 40 litres per person per day, said Saeed Hameed, a water specialist with UNICEF, the United Nations Children’s Fund.

One aid official said water taps may be refitted with spouts that limit water to a trickle. UNICEF also plans an education program about water conservation and hygiene for the refugees.

“We’ve had a problem with people defecating in the showers and we have to explain why this is a problem,” Hameed said. “It attracts flies that can carry disease.”

The need to conserve water is not as critical in Syria as in Jordan, which is one of the world’s driest countries and struggles with a water crisis.

Desert covers 92 per cent of Jordan and its main surface water source, the River Jordan, has lost 95 per cent of its natural flow because of canals and irrigation up river in countries like Syria and Israel.

As Jordan’s water needs are growing — its population of 6.7 million is climbing 3.5 per cent a year — its resources are dwindling. In the capital city of Amman, the government provides tap water to many homes just once a week.

For the past several years, the government has been building the Disi Water Conveyance project, a $1.1-billion effort to tap into an ancient 300,000-year-old aquifer, although the project is delayed after a 2009 study by Duke University professors found the water highly radioactive. The government disputes the study’s findings.

In one respect, Zaatari is unique among refugee camps.

It’s as dry and hot as any camp in sub-Saharan Africa, but in addition to working-class, uneducated farmers and daily labourers, there are many middle and upper-middle class Syrians, who walk through Zaatari wearing $100 soccer jerseys and Ralph Lauren golf shirts.

“We are living like nomads in the Sahara,” said one man, who didn’t want to give his name in order to protect family still in Syria.

“I just can’t believe it,” said the man, 51, who was educated in the U.K. “For years I watched TV and saw these ads from charities that were fundraising for camps like this. Now I’m in one.”

After two weeks, there are 15 water distribution points with six taps apiece, 87 chemical toilets, and 25 Turkish-style flush toilets. The hard plastic bladders at every water point can hold 10 tons of water.

“We’ve put the black shades over them to try to keep the temperature down,” Mack said.

Camp officials, in anticipation of a long stay, are building more permanent water facilities — 40 cinder-block buildings that each have five toilets, and an adjoining septic system, and five showers.

Currently, six trucks with the capacity to hold between 8,000 and 40,000 litres bring 258,000 litres of water a day to Zaatari from nearby cities, Mack said.

Drilling should begin soon to allow officials to build a well that will tap a non-renewable aquifer 500 metres underground.

“It’s like a race,” said Mack, 49, who has also established water facilities at refugee camps in Haiti. “Refugees come in, we have to try to keep ahead of the demand.”

“What would I tell someone who comes tonight?” asked Majaresh, the mother of two from Daraa. “I’d say welcome to hell. I don’t remember what cold water tastes like.”

Education about water conservation is critical, especially in dry countries such as Jordan where water scarcity is a national problem.  A global water crisis is the stark reality as our population continues to put pressure on scarce water reserves.  In the future, wars are likely to be fought over fresh water resources, not oil.