Indo-Pak: Will water scarcity cause conflict?

The water issue is gaining increasing prominence in bilateral relations between Pakistan and India. 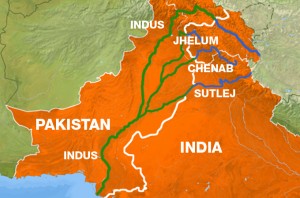 Recent disputes over the Baglihar and Kishanganga dams have placed great strain on the long-standing water sharing arrangement based on the Indus Water Treaty. As water stress becomes an increasingly glaring reality, the whole world will be watching how our nuclear armed countries choose to address this challenge.

The water sharing problem in the Indian subcontinent, in fact, resonates with water stress related tensions across many other countries which share waterways, including the Nile and the Mekong. As population, agricultural and energy generation pressures mount, water supply in all these shared water basins is set to become more difficult.

Water availability across our part of the world is already unpredictable due to climate changes with a simultaneous increase in major flooding and severe droughts. A Dutch study has estimated that shrinking Himalayan glaciers will reduce the flow of water to the Indus by around eight per cent over the next four decades. This is not a good sign for Pakistan, which is already described by the UN as one of the world’s “hotspots” as far as water shortages are concerned.

The 1960 Indus Water Basin Treaty, signed at a time when India and Pakistan both had abundant water is now outdated. The Indus Water Treaty gave Pakistan rights over the Indus Valley’s three western rivers, while India controls the three rivers to the east. India has initiated several dam and power station projects on the western rivers, fuelling fears that these activities will alter water flows across the border. India dismisses Pakistan’s fears as paranoia, yet, it too fears that China may attempt to change the course of the Tsangpo/Brahmaputra River in Tibet. India also has tensions with Bangladesh, Bhutan and Nepal over water sharing.

The existing Indo-Pak water sharing paradigm may no longer be able to address the emergent tensions. Despite numerous rounds of bilateral talks, India and Pakistan are back in the Permanent Court of Arbitration over Indian dam building aspirations in Kashmir.

More innovative approaches have called for an integrated approach towards water management instead of trying to merely divide waters of the Indus basin. Such an approach would not only be more sensitive to the ecological and environmental challenges taking place in the region, but potentially help nudge our neighbouring countries towards broader cooperation as well.

Positive confidence building steps would include greater information sharing concerning river flows. Launching joint Indo-Pak dam ventures such as the Tala Hydroelectric Project, recently initiated between India and Bhutan, would be a further step in the direction of increased cooperation.

Conversely, it is crucial to acknowledge that our existing water woes are being compounded due to wastage, inefficient use and contamination. Water infrastructure systems, such as canals and pipes used to irrigate farm lands, are falling apart due to lack of adequate attention. Application of donor-backed policies like charging flat rates for irrigational water usage (as in Punjab) have not been able to generate the required resources to maintain the irrigational infrastructure, nor do they help ensure that poorer farmers are spared the brunt of revenue collection, or ensured better access to existing water supplies.

The untenable strain on groundwater is another serious issue. According to the World Bank, Indian aquifers are reaching critical conditions despite the fact that over 60 per cent of irrigated agriculture and 85 per cent of drinking water supplies in the country depend on groundwater. The groundwater situation in Pakistan is no better, yet, anyone with the money to pay for diesel can pump out as much water as they like. In fact, Pakistan has been keen to lease out vast tracts of its agricultural land to enable agribusiness companies produce food for Gulf states by tapping even deeper into already shrivelling water aquifers.

Conservation of groundwater aquifers as well as more efficient use of freshwater derived from rivers within water stressed countries, as well as across them, is the only way to ensure that the frightful projection of catastrophic regional water wars does not materialise.

Conflict over water resources, within and between nations, is occurring already and it is quite conceivable that ‘water wars’ will be commonplace in the future.  Currently, nations that control fossil fuel reserves are in a position of global control; the future will probably see nations that control water resources in a similar position.  One can become water self-sufficient (and reduce reliance on government) by installing water conservation systems such as rooftop rainwater harvesting systems and rain water tanks.  To view the wide range of suitable plastic water tanks available in South Africa (made by JoJo Tanks), click on the links below.