A stone-age underground water reservoir could transform life in arid Namibia, a government official said Friday, holding up to five million cubic metres of water that could supply the area for 400 years. 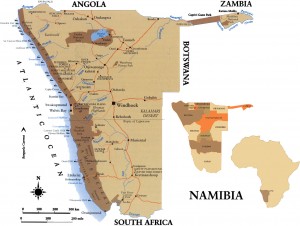 “If the underground water reservoir is indeed there and scientifically proven, it would be a relief for the supply of potable water in northern Namibia,” Abraham Nehemia, under secretary for water and forestry in Namibia’s agriculture ministry, told AFP on Friday.

“Tests have not been completed fully and the perceived water quantity not yet scientifically proven,” he said.

Last week the German embassy in Namibia announced that German experts had discovered the new underground water aquifer close to the border with Angola.

“According to cautious estimates, the water volumes could supply the densely populated northern region of Namibia for about 400 years at current supply volumes,” said Martin Quinger, project manager from the German federal institute for geosciences and natural resources.

Quinger announced the discovery to the Namibia Scientific Society earlier this month.

“The water is of very good quality and about 10,000 years old,” Quinger said.

It gets recharged in southern Angola during the rainy seasons and slowly flows underground towards Namibia.

The precious resource is covered by a layer of strong rock, but above that, still underground – is a layer of salty water. Uncoordinated and unauthorised drilling for the huge aquifer could threaten the good water, according to Quinger.

The two water layers could be mixed, deteriorating the good quality of the ancient water.

Quinger and his team of experts proposed to have the area declared a controlled water area while research continues over the next year.

They receive water from the Calueque dam on the Kunene River in south-western Angola via an open water canal.

Over the last decade, Namibia has been looking at ways to secure water supplies.

“If the newly discovered water supply can be confirmed, our government can possibly also look at supplying central Namibia from there,” Nehemia said.

Discoveries such as this huge underground reservoir are more important than any other ‘precious’ resource, especially in sub-Saharan Africa’s driest country, Namibia.  If this reservoir is successfully tapped, it will require very careful management to prevent over-exploitation.  Groundwater reserves are essential to many countries, including South Africa but the threat of pollution and over-abstraction are a grave concern.  It should also be remembered that, in general, groundwater reservoirs should be considered non-renewable- when they are pumped dry, it could be thousands of years or more before they are replenished.  Wherever possible, renewable water resources such as rain water should be harvested- easily accomplished by the installation of rain water tanks to store rainwater collected on rooftops.  A wide variety of plastic or poly water tanks may be used for rain water storage; click on the links below to view the various water tanks, chemical tanks and tank stands available from JoJo Tanks, South Africa.