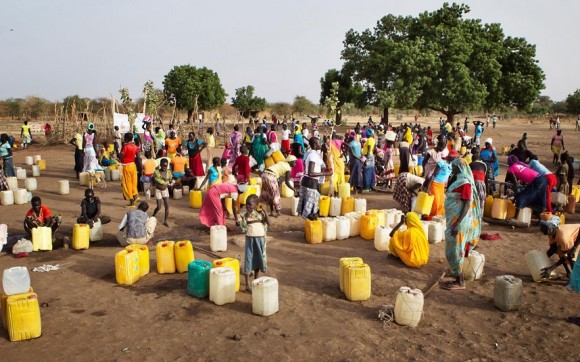 IOM has begun drilling the first of four boreholes and installing two water storage tanks, each with a capacity of 45,000 litres, to provide adequate and safe drinking water to an estimated 42,000 Sudanese refugees at Doro camp in South Sudan’s Upper Nile State.

An estimated 107,000 people have entered South Sudan’s Upper Nile state and are now living in three main refugee camps: Doro, Jamam and Yusif Batil. There are also an estimated 10,000 refugees remaining at the Kilo 18 transit site close to the border with Sudan.

Doro, the largest of the three camps, is 20 km southeast of Yusif Batil camp, which was recently established to receive 23,000 new arrivals from the Kilo 18 transit site. UNHCR has transported 2,000 – 3,000 refugees from Kilo 18 to Yusif Batil during the current relocation operation.

An estimated 10,000 refugees are living in the open and under trees in Yusif Batil, waiting for tents and emergency shelter materials which are being flown from Juba and Nairobi into Maban by UNHCR. IOM is supporting partners at the camp with water storage tanks, latrine slabs, piping and motorized pumps.

The main challenges facing all the camps include addressing the critical water gaps, together with meeting the non food relief item (NFI) and shelter needs of the steady influx of refugees.

IOM is responsible for the water and sanitation services to refugees in Doro camp. Initially IOM delivered water by truck to outlying areas of the camp in order to reduce the 2km walk for households to access safe water, but trucking has become increasingly difficult due to heavy rains.

In a shift in strategy, IOM has started work on four planned boreholes for communities that are located far from existing water sources. Drilling equipment has been mobilized and drilling work has begun on the first of four boreholes.

Currently, IOM and partners supply 520,800 liters of water daily to the refugees in Doro. Each refugee receives 12.4 litres of safe drinking water per day. With the installation of two 45,000 litre storage tanks, IOM projects that the daily supply of water will increase from 12.4 to 14 liters per person per day.

To date IOM has completed the construction of 736 family latrines, 745 communal latrines and 810 bathing shelters. It has installed three water distribution systems and trained 10 water management committees and 1,146 latrine management committee members. Some 24,000 refugees have been reached through hygiene promotion. IOM has prepositioned sufficient equipment to continue to provide water and sanitation services to refugees settled in Doro through the rainy season.

The new arrivals are mostly women and children who say they were forced to leave their homes because of the conflict and lack of food. In Doro camp new arrivals are directed to villages where members of their former communities from Blue Nile State have set up. The sheiks responsible for each village work with Relief International (Camp Management), which liaises with UNHCR for registration and WFP for food distribution.

Humanitarian agencies in South Sudan have no access to Blue Nile State, and there is little information about the number of refugees still attempting to cross into South Sudan.

IOM continues to support UNHCR with the relocation of refugees from border areas to camps, and in transporting cargo from Juba to Upper Nile state with barge and boat movements – the only way to move assets to field operations during the rainy season.

At the onset of the refugee response IOM appealed for USD 10 million in order to respond to emerging needs. While refugee volumes in Upper Nile state continue to grow, to date, IOM has received USD 2 million worth of contributions to its operations from the United States and EUR 1.5 million from the government of Italy.

Water is critical to the survival of these refugees and it is good that aid companies have decided to ensure a reliable water supply by drilling boreholes and supplying water tanks.