Video: Installing a 500 gallon rain water cistern in the garden

Strong evidence of ‘ocean of water’ on Saturn moon 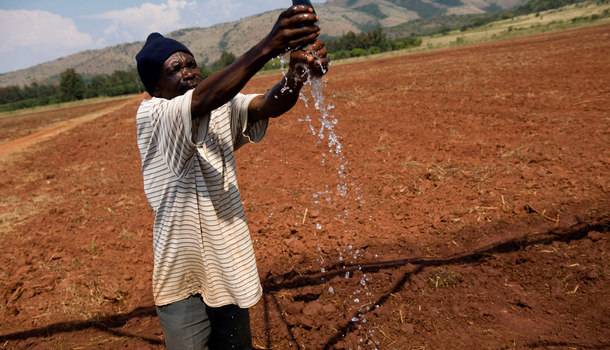 A water crisis is looming in South Africa, communities are at risk of losing access to water, and coal is right in the middle of it, according to a report released by Greenpeace. This latest briefing is a stark reminder to the SA government to start pushing Eskom to substantially invest in renewable energy.

South Africa is projected to experience a 17% gap between water supply and demand by 2030, but new mega coal-fired power stations (Medupi and Kusile) are being built by the national utility Eskom without a clear view of what the water impacts are likely to be.

According to Melita Steele, climate and energy campaigner for Greenpeace Africa: “The truth is that in the face of looming electricity price hikes, and a R13.2 billion net profit recorded by Eskom this year, local communities in coal areas may lose their water rights to make way for mines, to help feed Eskom’s coal addiction.”

The briefing entitled: ‘The Eskom factor: Power politics and the electricity sector in South Africa'[1] tries to identify what the real story is behind Eskom’s decisions, outlining Eskom’s role in South Africa, its evolution as a state-owned company, and its current status as an influential player in South African politics. This is combined with an independently commissioned feature story ‘Coal’s hidden water cost to South Africa’, written by award-winning journalist, Yolandi Groenewald.

“Eskom is the only ‘strategic’ water user under the National Water Act, which means that the Department of Water Affairs has to provide it with water, come hell or high water. The problem is that in one day, Eskom uses enough water to grow almost a million kilograms of maize, due to its reliance on coal. If there were a drought, water might have to be taken away from other users. But Medupi and Kusile will push up Eskom’s water usage considerably in the next decade. The impact of new coal-fired power stations on a future water crisis hasn’t been adequately taken into account”, continued Steele.

“South Africa’s current electricity system is geared to supply energy-intensive industries, and building new coal-fired power stations to ‘keep the lights on’ means catering to big business, at the expense of the 12.3 million South Africans without access to electricity. Making profits for a privileged few, while the people of South Africa pay the price.”

“It is time to hold Eskom and the South African government accountable for the decisions being made today, which will affect all of our futures. South Africa’s continued reliance on coal goes to the heart of whether we can keep our taps running with clean water. Greenpeace calls on Eskom to stop building new coal-fired power stations, and instead invest in the substantial rollout of large-scale and decentralised renewable energy projects to allow for a just transition away from coal: creating jobs, ensuring universal energy access, and avoiding a water crisis exacerbated by catastrophic climate change. In the face of South Africa’s already severe water and electricity crises, the government’s inaction is irresponsible”, Steele concluded.

The above information comes after a recent announcement by South Africa’s electricity utility, Eskom, that it aims to reduce its water consumption by 260 billion litres a year by 2030…hopefully this is enough to help stave off the looming water crisis in this country.