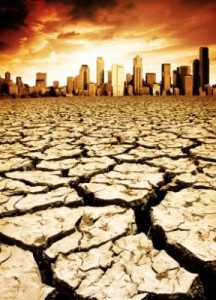 As the human population has climbed past seven billion, and the consumption per person of everything from burgers to blue jeans has risen inexorably, the finiteness of Earth’s freshwater is becoming ever more apparent.

It takes water to make everything, and the explosion of demand for all manner of products is draining rivers, shrinking lakes, and depleting aquifers.

Consider this: on average it takes 2,700 liters (713 gallons) to make a cotton shirt and 9,800 liters (2600 gallons) to make a pair of blue jeans.  The cotton crops growing in farmers’ fields consume most of that water; a smaller share is used in the factories that churn out the clothes.

Such figures might not matter if there was abundant water whenever and wherever we needed it – or if water had a substitute.  But water is limited, and there’s no substitute for it.  We need water to quench our thirst, to grow our food, to cool electric power plants, and to make cars, computers and all those cotton shirts.

And that’s why the size of humanity’s water footprint – and of yours and mine – matters.

In a study published this week in the Proceedings of the National Academy of Sciences, researchers Arjen Hoekstra and Mesfin Mekonnen of the University of Twente in the Netherlands, have made the most detailed estimate to date of the scale and patterns of humanity’s water consumption.

This is a tricky and complicated task.  Using a high level of spatial resolution, the researchers tabulated all the water from both rainfall and irrigation that’s consumed in making goods and services for the global population. To complete the picture, they added in the volume of water needed to assimilate the pollution generated along the way.  They calculated the annual average global footprint for 1996-2005, the most recent ten-year period for which the necessary data were available.

The result is a large number – 9,087 billion cubic meters (2,400 trillion gallons) per year.   That’s a volume equivalent to the annual flow of five hundred Colorado Rivers.

Agriculture accounts for a whopping 92 percent of that global water footprint.  Not only are crops naturally thirsty, we’re feeding more than a third of the global grain harvest to livestock to satisfy our desires for meat and other animal products. Added up, the average beef burger takes 2,400 liters (634 gallons) of water to make.

One of the most interesting findings of Hoekstra and Mekonnen is that one-fifth of humanity’s water footprint travels across national borders in the form of “virtual water” – the water embedded in products that are traded between countries. For Egypt, Israel, Iran, Jordan, Saudi Arabia and other water-scarce nations, the ability to externalize their water consumption by importing wheat and other thirsty grains allows them to save their scarce water for industrial production and other higher-value uses.

Virtual water trade over the period 1996-2005. Only the biggest flows are shown. Source: Hoekstra and Mekonnen, PNAS early edition, 2012.

Yet some water-stressed countries export a great deal of virtual water to other countries. For example, according to U.S. Department of Agriculture statistics, the Central Asian nations of the Aral Sea basin export 96 percent of the cotton they produce. Large-scale cotton production in this region over the last half century has caused the Aral Sea, once the world’s fourth largest lake, to lose 80 percent of its water.  Much of the lake bed is now a salty wasteland.

The United States, blessed with a vast area of highly productive rain-fed cropland, is the world’s biggest exporter of virtual water, sending millions of tons of grain to countries around the world.  Its biggest virtual water imports come from China’s Yangtze basin, which produces a wide variety of goods for the U.S. market.

So what is a growing population to do to live within water’s limits and keep rivers flowing?

The short answer: consumers can alter their diets and buying habits to shrink their water footprints, and producers can use water more efficiently in making their products.

As corporations grow concerned about the risks water scarcity poses to their bottom lines, many are taking a careful look at their supply chains with an eye toward conserving water. Unilever, for instance, has helped Tanzanian tea farmers shift to drip irrigation so its Lipton tea bags have a lower water footprint. Patagonia, retailer of outdoor apparel, has gone a step further. Its eye-opening “Don’t Buy this Jacket” advertisement and its Common Threads Initiative to motivate companies and consumers to reduce, repair, reuse, recycle and re-imagine our world are helping to motivate water stewardship.

There are dozens more examples of organizations offering practical ways to shrink the size of our water footprints – from Meatless Mondays to the Alliance for Water Efficiency.

The movement to live prosperously while reducing our impact on the planet’s precious waters is beginning.  The pace at which it unfolds is up to us.