2012: Will Water Scarcity Increase Tensions Across The World?

Glaciers are retreating at an unexpectedly fast rate according to research done in Peru’s Cordillera Blanca by McGill doctoral student Michel Baraer. They are currently shrinking by about one per cent a year, and that percentage is increasing steadily, according to his calculations. 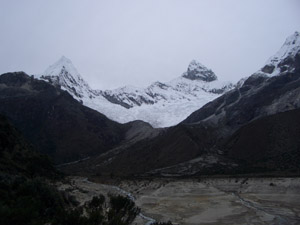 But despite this accelerated glacial shrinking, for the first time, the volume of water draining from the glacier into the Rio Santa in Northern Peru has started to decrease significantly. Baraer, and collaborators Prof. Bryan Mark, at the Ohio State University, and Prof. Jeffrey McKenzie, at McGill, calculate that water levels during the dry season could decrease by as much as 30 percent lower than they are currently. “When a glacier starts to retreat, at some point you reach a plateau and from this point onwards, you have a decrease in the discharge of meltwater from the glacier,” explained Baraer.

“Where scientists once believed that they had 10 to 20 years to adapt to reduced runoff, that time is now up,” said Baraer.

“For almost all the watersheds we have studied, we have good evidence that we have passed peak water.” This means that the millions of people in the region who depend on the water for electricity, agriculture and drinking water could soon face serious problems because of reduced water supplies.