Northern Cape solar resources among the best in the world 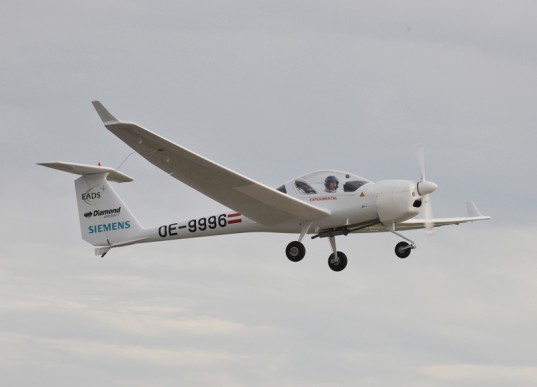 Siemans just unveiled the world’s first true plug-in hybrid-electric airplane, which has an engine that resembles the Chevy Volt‘s. The airplane took its maiden flight on June 8 at the Wiener Neustadt airfield in Vienna, Austria and could reduce fuel consumption and emissions by 25% — that number is taken from statistics of the most fuel efficient aircraft available. This proven concept could do for the air what the Chevy Volt has done for the roads, and provide a nice segue from gasoline power to electricity by splicing the two technologies together.

The plane runs off of an electric motor that is initially powered by a battery and then once depleted, is fed by a gasoline generator. The aircraft was modeled after Diamond Aircraft’s HK36 Super Dimona and is the only one of its kind in the world. In addition to being much more fuel efficient the two seater is able to take off while powered only by electricity which could help with noise pollution problems around airports.

Currently they’ve only installed the technology in this small, two person motor glider, but Siemens has plans to go bigger. “The first thing we want to do is test the technology in small aircraft. In the long-term, however, the drive system will also be used in large-scale aircraft,” said Dr. Frank Anton, the initiator of electric aircraft development at Siemens. The motor glider’s propeller is powered by a 70kW electric motor and the plane’s battery is recharged during cruising phases to allow for even longer flights.