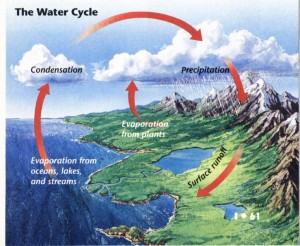 Evidence that the world’s water cycle has already intensified is contained in research published in the American Journal of Climate.  The change in the water cycle means arid regions have become drier and high rainfall regions wetter as atmospheric temperature increases.  The study shows the surface ocean beneath rainfall-dominated regions has freshened, whereas ocean regions dominated by evaporation are saltier.

The paper also confirms that surface warming of the world’s oceans over the past 50 years has penetrated into the oceans’ interior, changing deep-ocean salinity patterns.  The ocean’s average surface temperature has risen about 0.4 degrees Celsius since 1950.  As the near-surface atmosphere warms, it can evaporate more water from the surface ocean and move it to new regions to release it as rain and snow.

Salinity patterns reflect the contrasts between ocean regions where the oceans lose water to the atmosphere and the others where it is re-deposited on the surface as salt-free rainwater.  Importantly, these broad-scale patterns of change are qualitatively consistent with simulations used by the Intergovernmental Panel on Climate Change.