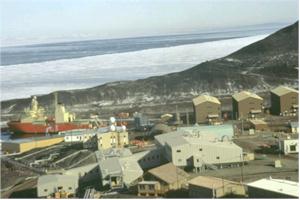 Mcmurdo base station in antarctica

It may be cold and inhospitable there on the world’s southernmost continent, but that hasn’t stopped a whole host of invasive species from settling there — a fact that has biologists quite concerned. As more and more researchers and tourists visit Antarctica, along with the shipments of food and equipment required to sustain them, they have been inadvertently importing a variety of plants, animals, and fungi that pose a direct threat to the natural ecosystem, as stark and uninhabited as it may seem.

According a report from The Telegraph, the nearly 4,000 humans stationed in Antarctica are hardly the only foreign residents living there. Some invasive species, like spiders and worms, were brought to the icy continent along with shipments of fruits and vegetables — others, such as plants and fungi, are thought to have been carried there on the shoes and clothes of tourists.

“Microorganisms such as fungi have the potential to have the greatest impact as many of them cause plant diseases,” says Dr. Kevin Hughes of the British Antarctic Survey. “The life on Antarctica is relatively primitive and has not been exposed to these kind of threats before, so they have no defense against them.”

In light of this threat, the international group that overseas the world’s southernmost continent are moving forward to prevent further damage.

Members of the Antarctic Treaty, which governs how the 46 countries to have signed it use the continent, are now drawing new rules to prevent non-native species being introduced to the Antarctic mainland and its surrounding islands.The latest research by scientists at the British Antarctic Survey revealed that soil carried in shipments of fresh fruit and vegetables contained slugs, spiders, weevils, caterpillars and fungi known to cause plant diseases.

It might seem that the extreme cold conditions in Antarctica would prevent outside species from gaining ground there, but researchers say that factor is becoming less protective as climate change continues to heat things up in the region — meaning “the risk posed by these non-native species increases as they are more likely to survive there,” says Hughes.

On some of the smaller, outlying islands off the coast of mainland Antarctica, larger invasive mammals, like rodents and cats, have gained ground — likely benefiting from human infrastructure for their survival. So far, however, the mainland itself has yet to be overrun, although colonies from as many as ten organisms have already be found there.

Much of the research being conducted Antarctic stations aim to better understanding important phenomena, like the deleterious effects of global warming, in hopes of ultimately finding ways to protect the planet’s diverse ecosystems. But even the noblest of venture can carry an unexpected price-tag — among other things.

Certain alien invasive species can have a devastating effect on local ecosystems.  Humans have been responsible for most of these occurrences, whether inadvertent or on purpose.  In the past, ignorance played a part in the spread of alien species.  There have been some calls for the introduction of Polar Bears into Antarctica but scientists hold serious reservations about doing this (see Can we save polar bears by moving them to Antartica?).  Climate change and global warming have exacerbated the effects of foreign species introductions whereas they may have been relatively benign in the past.