Living on a farm in the city 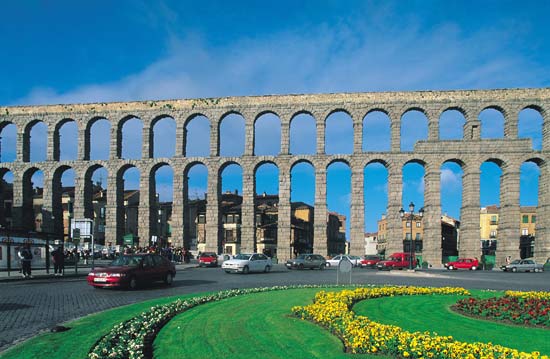 The word aqueduct derives from the Latin words aqua meaning water and ducere meaning to lead. An aqueduct is therefore best described as an artificially structure such as a channel, tunnel, or ditch, that is used to transport water from a remote location to another.

The very first aqueducts were constructed by ancient civilizations such as those in Babylon, Assyria, and Egypt. These primitive aqueducts were built simply as open canals dug out between a river and city. The most famous engineers of aqueducts amongst all ancient civilizations were the Romans however. Over a period of 500 years the Romans constructed about 11 ancient aqueducts that fueled their capital’s water supply and built many more throughout their empire. 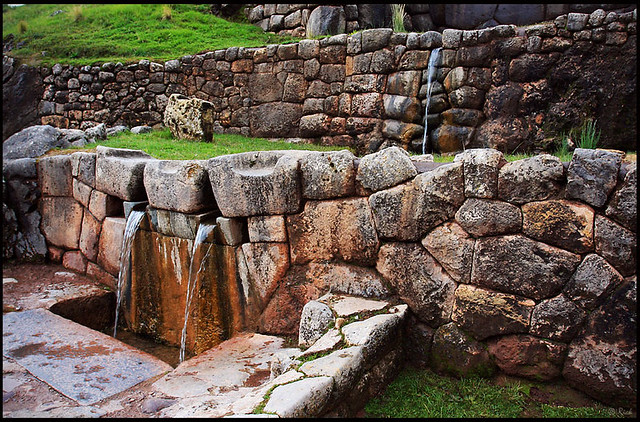 Nicknamed the “The Bath of the Inca”, Tambomachay is an archaeological site near Cusco, Peru. It consists of a series of ancient aqueducts, canals and waterfalls originating from thermal springs nearby that run through the terraced rocks. Water and washing seemed to be an important part of Incan life, and many of the Inca sites in the Sacred Valley have baths and aqueducts as prominent features. In Tambomachay bathing seems to have been such a large part of life that it’s now thought it must have been a spa. 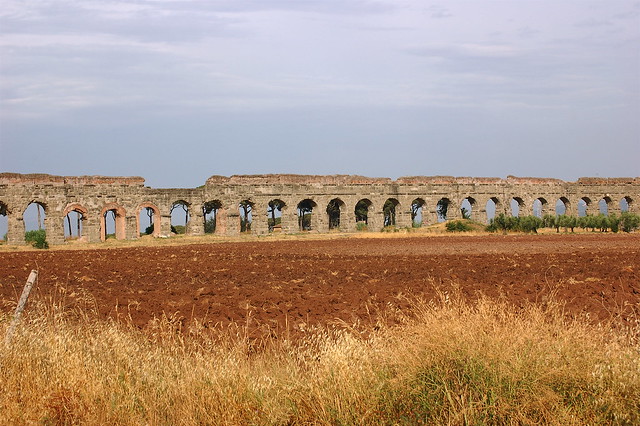 Over a period of 500 years (from 312 BC to 226 AD) 11 Roman aqueducts were built to bring water to Rome from as far away as 92 kilometers (57 miles). The aqueduct system totaled over 415 km (258 miles) although only about 48 km (30 miles) was made of stone arches while the rest consisted of underground tunnels. The Aqueduct Park hosts the remains of 7 ancient aqueducts: Marcio, Anio Novus, Tepula, Mariana, Claudio, Iulia and Felice. Of these, the Aqua Claudio is the most impressive. It was built around 52 AD and reached a height of 28 meters (92 feet). 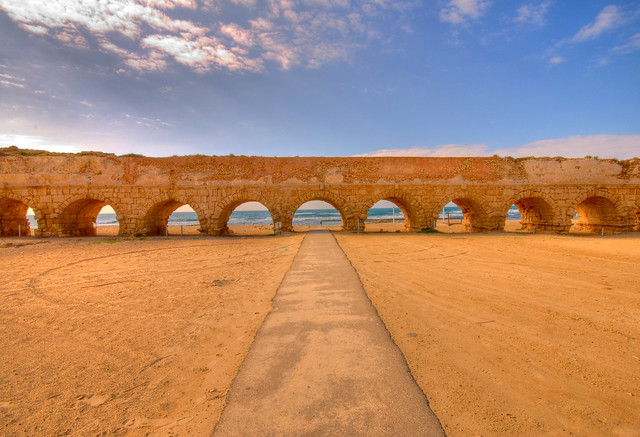 Caesarea was an important port city built by King Herod the Great between 23-13 BC. The aqueduct brought running water to the city from springs 10 km (6 miles) away. Herod built the first aqueduct when the city was founded. The Romans expanded the ancient aqueduct in the 2nd century AD. This section tapped into the older aqueduct, and doubled its capacity. The aqueduct continued to supply water for 1200 years. During the ages it was repaired several times. 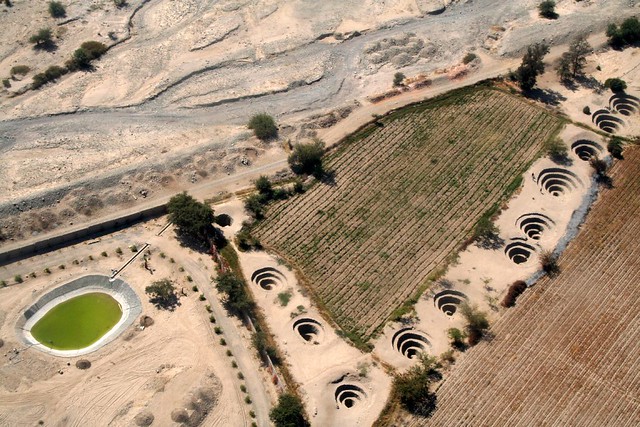 The Nazca Aqueducts were built in the 3rd to 6th century AD by the Nazca people to survive the arid desert climate. Water running in aquifers was channeled to where it was needed using man-made underground channels. Concentrical paths leading down to these underground channels provided for direct access to the water and the underground channel for maintenance. Still in use today by the inhabitants of the valley, these tunnels, wells and trenches are known collectively as puquios. Some of the best preserved puquios are those located in Cantalloc. 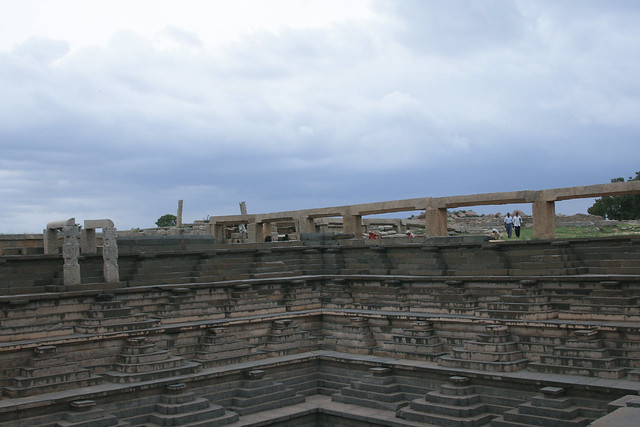 Hampi was the capital of the 14th century the Vijayanagar empire in present-day India. Around Hampi are the remains of ancient aqueducts and canals that were used to bring water from the Tungabhadra river and feed the tanks and baths. Water inside the temples was usual supplied by aqueducts underground. One of the main branches of the aqueduct supplied water to the Stepped Tank, a 7 meter (23 feet) deep water reservoir. In fact the very discovery of the Stepped Tank was because this branch of the aqueduct appeared to lead nowhere. Archeologists dug the ground at its end point and the tank emerged.

5 Aqueduct of The Miracles 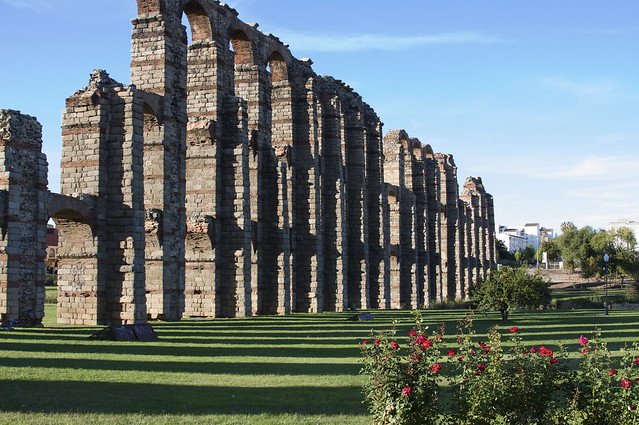 The Aqueduct of The Miracles (Acueducto de los Milagros) is one of three ancient Roman aqueducts built at Mérida in modern-day Spain. It originally brought water to the city from an artificial lake, supplied by the river Aberregas around 5 km (3 miles) to the north-west of Mérida. The aqueduct is thought to have been constructed during the 1st century AD. In later centuries, the inhabitants of Mérida dubbed it the “Aqueduct of The Miracles” for the awe that it evoked. 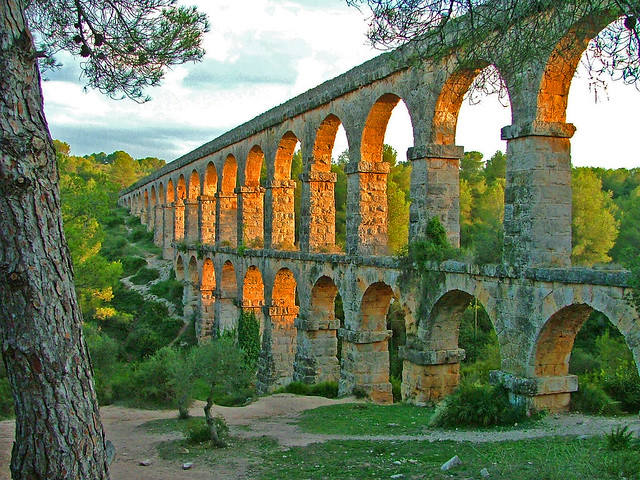 Les Ferreres Aqueduct (also known as Pont del Diable meaning Devil’s Bridge) was built to take water from the Francoli water 15 kilometers (9 miles) south to the city of Tarragona in present-day Spain. It probably dates from the time of Augustus, the first ruler of the Roman Empire. The Roman aqueduct has a maximum height of 27 meter and a length of 249 meter. It was composed by 25 upper arches and 11 lower arches. 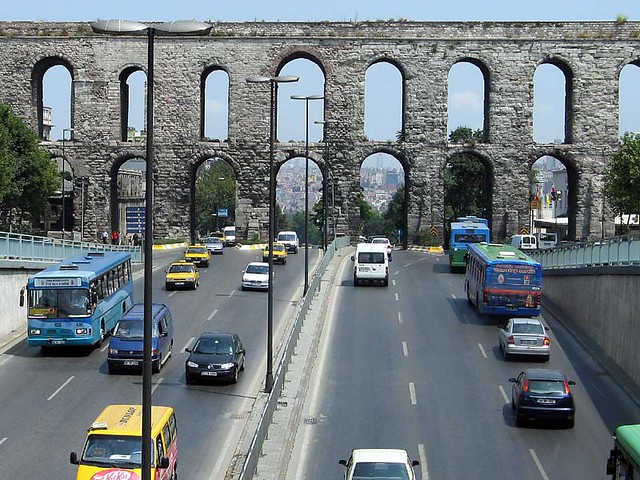 The Valens Aqueduct was completed in the year 368 AD during the reign of Roman Emperor Valens, whose name it bears. It was merely one of the terminal points of a system of ancient aqueducts and canals of Constantinople (modern Istanbul, Turkey). The water system eventually reached over 250 kilometers (155 miles) in total length, the longest such system of Antiquity. The Valens Aqueduct was restored by several Ottoman Sultans and was still the major water-providing system of medieval Constantinople. The surviving section is 921 meters (3021 feet) long, about 50 meters less than the original length. The Atatürk boulevard passes under its arches. 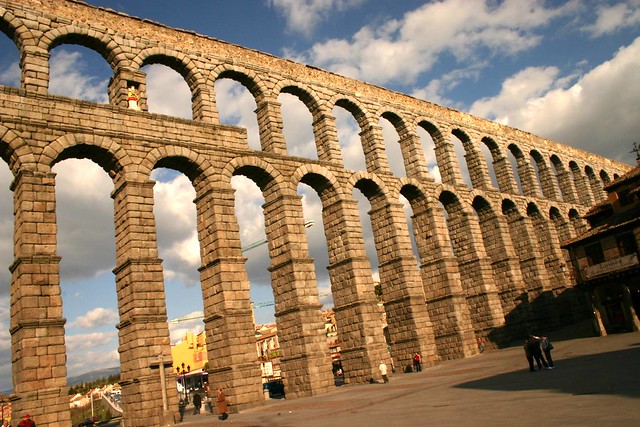 Probably built around 50 AD, the Aqueduct of Segovia is one of the best-preserved monuments left by the Romans in Spain. The ancient aqueduct carries water 16 km (10 miles) from the Frío River to Segovia and was built of some 24,000 massive granite blocks without the use of mortar. The above-ground portion is 728 meters (2,388 feet) long and consists of 165 arches more than 9 meters (30 feet) high. It is the foremost symbol of Segovia and still provided water to the city in the 20th century. 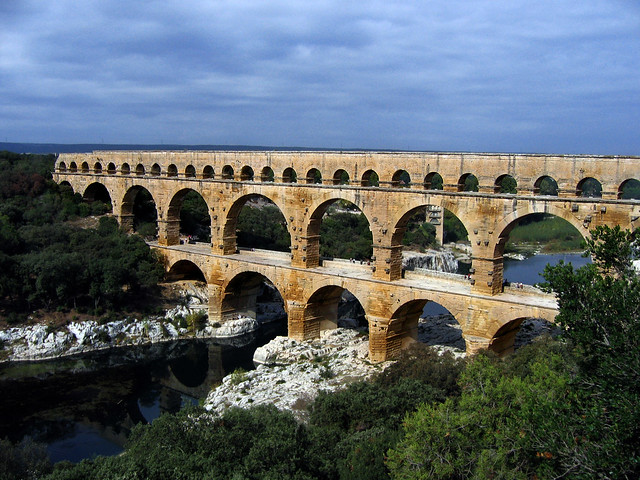 The Pont du Gard (literally bridge of the Gard ) is an ancient aqueduct in the South of France constructed by the Roman Empire. It was originally part of a 50 km (31 miles) canal supplying fresh water to the Roman city of Nimes. The Roman aqueduct was constructed entirely without the use of mortar. The aqueduct’s stones – some of which weigh up to 6 tons – were precisely cut to fit perfectly together eliminating the need for mortar. From the Middle Ages to the 18th century, the ancient aqueduct was used as a conventional bridge to facilitate foot traffic across the river. Today, the Pont du Gard is one of France’s top five tourist attractions, with 1.4 million visitors reported in 2001.

Ancient technology is relevant today. Simple, effective and enduring, aqueducts achieve their purpose.   Canal systems are still being used for transporting water around the world and in South Africa, especially in farming areas.  The use of gravity and shoots (to accelerate water up a hill) mean that no pumps are required, making this system very eco-friendly and robust.  Residents of White River town in Mpumalanga (South Africa) should take some time to look at the canal system that supplies the town’s water; this canal system has served the town for more than 60 years and is efficiently maintained by the White River Estates Irrigation Board. Green technology need not be new technology, sometimes simple is better. Also see Five Ingenious Ways Humans Move Water.