What’s the Link between the World’s Population and Nuclear Energy?

Record-Low Ice, Even in the Winter Arctic: is Global Warming the Cause?

Save Water & the Environment with a Rain Garden 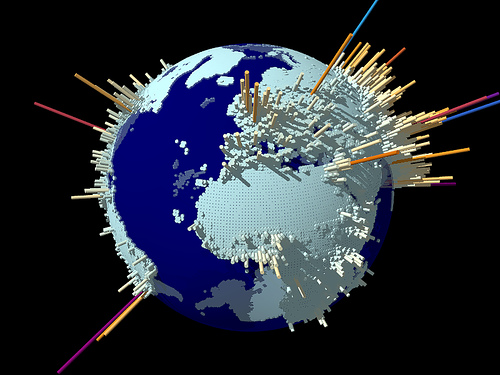 Japan’s nuclear disaster got me thinking about energy demand. Nuclear power advocates justify the decision to power plants with uranium as the best way to meet energy demands that are increasing because world population is growing. I couldn’t help but wonder: why aren’t we talking about reducing population as part of our global strategy to minimize dependence on power sources that pollute the environment and threaten people’s health?

I asked Bob Engelman, a Vice President at the Worldwatch Institute and one of the country’s most respected experts on the link between population and the environment, to weigh in. Read his post, then let us know how you think population should figure into the calculations we’re making about our energy future.

Always sensitive to talk about, the topic of population is hard to keep under wraps when news keeps reminding us that we live in a finite world. The costs of food and energy are rising despite a global economy in low gear. The likelihood of stemming the rise of the atmosphere’s greenhouse gas concentrations seems farther away than ever. And as Japan’s nuclear nightmare has reminded us yet again, there is no truly safe way to provide the energy that 6.9 billion people need to live decently. We’re pressing hard against limits set by the laws of physics and biology. The idea that we can easily trim our individual consumption to come into balance with nature—worthy as that effort is—looks increasingly naïve.

If people in the developed world slash their per capita greenhouse emissions by half, their effort could be counterbalanced by people in developing countries boosting theirs by just 11 percent. Global per capita emissions would still be inequitable—and unsustainably globe-warming.

Are there too many of us?

When I ponder how hard it will be to save the global climate, the oceans, forests, fisheries and non-human species, the answer seems obvious. But that answer is dangerous. To say we are too many is to imply some of us should go away fast, or at least that people should be made to have fewer children than they’d like.

The conversation looks easier if we start with some core values:

One: See the global environmental dilemma not as a problem to be solved but as a predicament to be responded to. We can’t control our future, but we can act with integrity as we aspire to build just societies in an environmentally-sound world. Addressing our numbers can become part of that.

Two: Embrace human rights as a foundation for our actions.

All people—even if too many or consuming too much—have dignity and a right to be here. As it happens, population policies based on the right of all women to choose whether and when to bear a child actually slow the growth of population.

Every country that offers easy access to contraceptive and safe abortion services also has a fertility rate of two children per woman or fewer, consistent with a declining population. More than two out of five pregnancies worldwide are unintended, suggesting that a world in which women everywhere were fully in control of their childbearing would soon reverse population growth. “Soon” would come even sooner if, at the same time, women’s standing relative to men surged—in education, health, economic well-being, legal protection and political participation.

Three: Acknowledge that no one can claim a greater right than anyone else to use energy and natural resources. This is called equity. We cannot object if the poorest people living today and yet to be born succeed in gaining the means to consume as much as Americans do. In a finite world whose limits we are now meeting, we need to learn how to share—and plan for a world in which there is enough safe energy, clean water and nutritious food for all.

None of this makes for an immediate silver bullet for our energy and environment problems. Nothing else does either. We need to make positive moves in every direction simultaneously, right now. But whenever we get serious about making the world livable for our children and grandchildren, population has an obvious place at the table.

Robert Engelman is vice president of the Worldwatch Institute and author of the book More: Population, Nature, and What Women Want (Island Press). His most recent Worldwatch report discusses the connections between women’s lives, population and climate change. (Email rengelman@worldwatch.org for free PDF.)

Excessive and unsustainable human population growth is at the core of so many environmental issues.  South Africa’s population is rising rapidly; a water crisis is looming in a country where water scarcity is already a major issue.  Perhaps it is time for more people to reconsider having children or at least only have one or two (see GINK- green inclinations, no kids).  If you are in a position to make this choice, consider yourself fortunate.