The Environmental Impact of the Japan Disasters 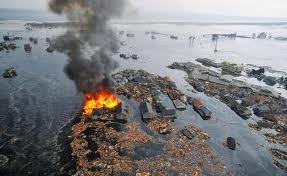 I had felt many quakes before, but this one did not stop. It grew. For almost three minutes the place was rocking, like being in a rolling boat. After turning on the TV to see what had happened, the live shots of the tsunamis came through. You have all seen it, so you know the extent of the damage. Nothing like it. Strangely there was hardly a person in any of the video clips. Japan was prepared, but not for the 6th biggest quake on the planet. The waves came just 15 minutes after the first shock, now revised by the US Geological Survey as a 9.0. For the next hour, the place rolled, swayed, and moved. The first six aftershocks were in the 7 point range. Unprecedented. The fact that most of Tokyo was intact was amazing, yet the upper spire of the Tokyo Tower was bent in the serious undulation that one would receive at that elevation, like being at the end of a 200-meter-long whip. We have now sadly all witnessed a triple hit to Japan, with the earthquake, tsunami and nuclear reactor problems. Amazingly, the country is still calm, organized and patient. If there is one country in the world where civil order, patience and neighborly cooperation is strong, it is in Japan, and this is something for us all to learn from. It is a positive factor in a grim unfolding of events, which at least helps to make the search and rescue efforts much easier. It also makes it possible for the government to ask for cooperation with brown-outs and nation-wide energy conservation measures. The country is still shaking, and the aftershocks are likely to continue for weeks as the fault line readjusts itself. Meanwhile, the rest of the world gave the stock markets a shock of their own, adding to the fourth ill in the nation’s set of issues. This is likely overblown, and actually poses a large opportunity for those who know what Japan is capable of. Unfortunately, the economy in Japan has been in the doldrums for two decades, at least from the point of view of the modern day economic and finance mindsets that think that we must always have growth, consumption and short term positive results. Many of these objectives have in fact brought about many of the environmental issues that we all face today. Japan is an aging society, and it does not have the capacity to keep growing and producing at the same pace it once did. Does this mean that the quality of life there is bad? No, on the contrary. They actually are likely to be leading the way in terms of a new model for many of our countries which are right around the corner on the same demographic and economic growth paths. Take note. If there is anything good to come of this tragedy, it will be the unifying of Japan, and the creation of a new set of leaders who are respected and can get things done. This has not been the case in the past, and change has been needed. With the rebuilding, cooperation and innovation that will come from this event, Japan will likely come out much stronger than before.

In the mean time, we still have a lot of pain to deal with, as the nuclear reactors do not seem to be stabilizing, and some are predicting that the boiling of some of the cooling water could take a number of days to occur. If that happens, we may still have a long way to go. Again, the similarities between this event and the BP oil spill are shocking. Those in charge did not set themselves up with the proper processes and solutions for such unexpected events. Transparency has never been a strong point in Japanese business culture, and on Tuesday, we even saw the Prime Minister of Japan showing public dismay at the leadership of Tokyo Electric, which runs the Fukushima plant.

Now the world is wondering again about the safety of nuclear power. The Fukushima plant was 40 years old, and the models used to build it did not take into account a tsunami of that magnitude. Backup systems were not well provisioned for, and we are now all learning a critical lesson. We should be thinking about sea wall technology and its capacity to prevent damage. Although these walls may have helped buy a small amount of time for those in its wake, the future design of these walls should be on the minds of all leaders in coastal cities, especially as storm surges and other acts of nature increase in climate-changed waters.

What will the impact be on the marine environment from all of this, in terms of radiation exposure to marine life, and all the debris? This should be of particular longer term concern in terms of marine food sources which Japan and much of the world rely upon. In a strange way, a silver lining here actually exists, as the fear from nuclear radiation in the ocean may reduce the demand for seafood from the Pacific.

Meanwhile, the debris, though no one’s fault, poses a huge waste issue and hopefully will spur new innovations for recycling and reuse of wood, metal and plastic. The nuclear events in Japan throw a huge curve ball to those who were banking on nuclear power to be an “easy” way out of the climate change debate. As oil prices rise, and costs for nuclear options increase with revised safety and regulatory measures, the expanded role for other alternative energies should be clear, and acted upon. Nuclear will still be part of the mix, but as with deep sea drilling, the safety and response procedures need to be carefully monitored and updated. As nuclear was a “silver bullet” meant to help with a big component of the climate change solution, this new problem in Japan will greatly increase the resistance from moving full speed ahead with nuclear options. Even China agreed to halt all of new nuclear plant approvals, in a country where 40 percent of the new world’s reactors are supposed to be built. In the meantime, this means more coal.

This disaster in Japan continues to unfold, and support is needed from everyone who can help provide it. We can all use this tragedy to remind us that we are a “passenger’ on this planet of ours, and whether it be natural events, or those made by man, our economy is dependent on our environment, and if we don’t respect it, we cannot expect to always prevail.

Now we have a chance to gather momentum for increased unified projects and programs which will really put us on the right path to positive change. We seem to forget this, even after BP’s spill and the debate on nuclear power. It is time to take note and really move in a new direction that is sustainable. Money should not be the issue.

Humans are the most effective and destructive habitat modifiers of all this planet’s species.  For too long we have changed the environment to suit our short-sighted goals.  The time has come to start working with Nature instead of against it.  In many cases, we have changed ecosystems irreversibly; we have to live with that and adapt while we repair what we can and stop environmentally damaging activities wherever possible.  Nuclear energy is not a sustainable energy source although it arguably has its place as we transition away from dirty-burning fossil fuels to cleaner energy such as wind energy and solar energy.  The core problem is that humans, as a species,  have exceeded the Earth’s carry capacity; this fact is often omitted by leaders and scientists but our population explosion is directly related to environmental degradation and unsustainable resource exploitation.

The ongoing saga of radiation from the damaged Japanese nuclear plant has forced many other countries to evaluate the risk of current and future nuclear energy plants.  The Japan crisis may influence South Africa’s future nuclear power plant decisions amidst growing public opposition.

Water conservation and renewable energy such as solar energy are two issues that affect the global community; make a difference and start conserving water and switch to renewable energy today.  Switching to sustainable, eco-friendly insurance is another way of reducing your carbon footprint.