As we all know, our planet is mostly water. So the idea of us ever running out of it, especially considering that most of what we use is naturally recycled, seems absurd. 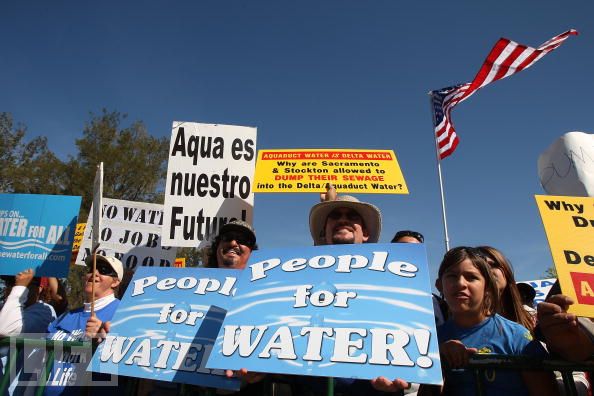 Just for reference, the planet contains roughly 1.4 billion cubic kilometers of water. About 97.5% of that is contained in the oceans or in saline groundwater. Of the remaining 2.5%, a little more than two-thirds are contained in glaciers. That leaves some 10.5 million cubic kilometers. Estimates of human water withdrawals in the early 2000s ran around 3700 cubic kilometers, which is somewhere in the neighborhood of one three-thousandth of the total. So, it sounds like there is no problem.

There is a problem, however, because water, like money, is not distributed equally. As Michael Moore pointed out in his recent essay, where he says that America is not broke; it’s just that the same amount of money is now in fewer pockets; the same is basically true with water, too.

While some areas are having terrible droughts, others are experiencing floods which are not particularly helpful, either. For this reasons, it is really only meaningful to talk about peak water on a regional basis.

Dr. Peter Gleick describes three types of peak water: peak renewable water, peak ecological water and peak non-renewable water. Renewable water is water that is replenished though snow melt or rainfall. As such, it is flow limited. It reaches a peak when the level withdrawn meets or exceeds the level of replenishment. Renewable is not the same as unlimited. Non-renewable water is like oil. It is found in “fossil” aquifers that are not being replenished at meaningful rates. It is stock-limited. In this sense it is like peak oil, which occurs when the rate of production begins to decline. Peak ecological water refers the amount of water that can be withdrawn from a river, stream or lake, before the damage and disruption costs more than the value of the water withdrawn.

Many factors complicate the analysis of water as a resource, including the renewable and non-renewable sources, consumptive and non-consumptive uses, as well as fresh vs. salt water, which can also be made interchangeable with the addition of sufficient energy, a resource that has its own scarcity issues.

The bottom line here is water availability. Even in the case of renewable sources, if water is evaporated by a cooling tower or diverted to a treatment plant, it will eventually return to a usable state, but in the meantime, it is unavailable.

A number of river basins have already reached their ecological peak including the Colorado, which no longer reaches the Pacific, as well at the Yellow River, the Nile and the Jordan. These areas have all seen substantial ecological impacts. Nonrenewable water sources that are approaching and may have reached their peak production include: the Ogallala Aquifer, the North China Plains, California’s Central Valley and numerous basins in India that account for roughly 8% of that country’s water use.

So while we have not yet reached the point where we have a “gas gauge” for water consumption, we do have an ever-growing understanding of the issues and the critical factors.

RP Siegel is the co-author of the eco-thriller Vapor Trails the first of a series dealing with the human side of energy, food and water.  Like airplanes, we all leave behind a vapor trail. And though we can easily see others’, we rarely see our own.

A water crisis is threatening the world, countries with more water resources than others may even become targets for military invasion in the future.  South Africa faces severe water scarcity and the precious water that we do have is also not distributed evenly.  Drastic water conservation measures and infrastructure development are required to prevent South Africa’s water security issues from becoming the cause of social and political unrest.  Many other African countries face the real possibility of conflict over water resources, both within their borders and between nations.  War over water resources is likely to become increasingly common over the next few decades. Rainwater harvesting and grey water recycling should be incorporated into both new and old buildings; not only do these save water but also money.

Water Rhapsody has incorporated Yes Solar– official distributor of German-made Solsquare solar water heating systems that are installed by Eskom-accredited solar installers (our solar geysers are eligible for Eskom solar energy rebates).  We are authorized JoJo Water Tank dealers and Atlas Plastics water tank suppliers in Mpumalanga and Limpopo Province (best water tank prices in the Lowveld!).  We are also able to supply sanitary hardware such as waterless toilets through our JoJo Tanks and Atlas Plastics dealerships.  Reduce your carbon footprint by switching the eco-friendly insurance.