Gardening for your survival (Part 1)

(See Gardening for your Survival Part 1)

There are at least five reasons why more of us should take up spade, 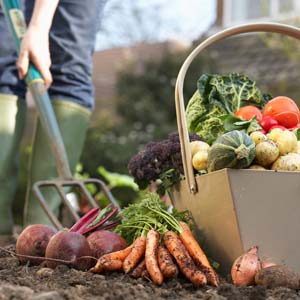 rake and hoe, make compost and raise good soil and garden beds with a vengeance, starting this spring and with an eye toward forever.

1) Peak oil. Most petroleum experts agree that we shot past peak oil in the US around 1971. Lest you’ve missed the raging peak oil, that’s the point at which more than half the readily, affordable retrievable oil in reserves has been used up, what remains is more expensive to retrieve, and the dregs are irretrievable. We’ve shot or are about to shoot past peak worldwide, estimates of when ranging from 2007 to 2013, with many oil company execs agreeing to at least the latter. There are no new cheap-easy oil fields coming on line. Any new fields you hear about or new methods, like tar sands drilling are expensive, water guzzling, dangerous, environmentally disastrous and unlikely to produce more than a few years worth of oil, and that a decade or more down the line. That means abundant, cheap oil is about to be history. What difference does that make?

For one thing, there is no replacement for oil that can do all that oil has done as cheaply and universally as oil has done it. I offer an exercise in Life Rules, “The ABC’s of Peak Oil” which helps readers imaginatively subtract from their lives everything that depends in one way or another on cheap easy oil. It doesn’t leave much.1

The global economy that presently supplies us with our food, runs on cheap oil and lots of it. It runs slower and less predictably on expensive oil that’s hard to get because it’s located in hard-to-reach or high-risk conflict-ridden zones. Cheap, abundant food on the shelves of grocery and big box stores and food banks, on our tables and in our bellies depends on cheap abundant oil for fertilizers, pesticides, and herbicides, and to power farm machinery and transport food from fields to processors and packagers and then to purveyors and consumers, around the world. Past peak, that system’s going to have the half-life of the strontium 90 that’s escaping the Fukushimi Dai-ichi reactor: 29 years, or there abouts. One good global crisis, and not that long.

2) Peak soil & space: A couple of links between peak oil and peak soil: First, it matters that one of the proposed alternatives to oil is biofuels. Acreage around the world is being converted from production of corn, wheat and soy for human and animal consumption—i.e., food—to production of ethanol and biofuels to put in trucks and cars and . . . Which makes remaining corn, et al, more expensive. Some energeconomy geniuses are proposing that Afghanis, for example, convert the fields of opium poppies that are their primary agricultural export, not to growing grains or legumes or other staple foods, but to biofuel, which would, not coincidentally, make the gasoline that goes in American military equipment much cheaper and provide Afghanis with a profitable market item rather than food.

According to a 2009 National Geographic staff report, “The corn used to make a 25-gallon tank of ethanol would feed one person for a year.” Tell that to Archer-Daniels-Midland, Al Gore’s deep-pockets friend and mega-ethanol and corn products producer.

Second, the huge oil-gluttonous machinery that has made factory farming possible has compacted soils, literally crushing the life out of them.

Arable land in the developing or so-called Third World has been at a premium since time immemorial, thanks to geographic location and/or persistent plundering by empires old and new. Revolutions in north Africa and the Middle East are occurring not just to obtain more democratic governments but also to obtain more food and more affordable food. Revolutionaries are barking up a tree that’s seen better days.

In the United States and elsewhere in the developed, read “First” world, arable land has reached peak production. All those petroleum-based products that fueled the Green Revolution of the last century, also produce so many crops, constantly, with support from toxic chemicals and without concern for the microbes that make soil a live, self-regenerating system, that most American farmland—if its farmers didn’t go organic a while back—is comprised of dead soils. Peak oil makes a repeat of the petroleum-driven 20th century Green Revolution impossible, which is good for soil and other living things, not so much for food prices and supplies.

After peak, in soil like in oil, comes descent. Adding insult to injury, every year farmers lose thousands of acres of arable land to urban and suburban sprawl and more tons of topsoil than they produce of grain and other field crops to attrition. Half the Earth’s original trove of topsoil, like that which once permitted the American Midwest to feed the world, has been lost to wind and erosion. Millions of years in the making, it has been depleted and degraded by industrialized agriculture in only a couple of centuries. China’s soils ride easterly winds across the Pacific to settle out on cars and rooftops in California while the American Bread Basket’s soils are building deltas and dead zones at the mouth of the Mississippi. Like oil, that soil isn’t coming back. We can only build it, help it to build itself and wait.

3) Monoculture: We can cut to the chase on this one. The food we eat is produced on industrial-strength, fossil-fuel-driven super farms. Those farms practice monoculture: the planting one crop, often of one genetic strain of that crop, at a time and sometimes year after year over vast landscapes of plowed field. When thousands of acres of farmland are sown with the same genetic strain of grain, uncongenial bout of weather, disease or pest to which that strain is susceptible can wipe out the whole crop. At present the Ug99 fungus, called stem rust, which emerged a decade ago in Africa, could wipe out more than 80% of the world’s wheat crops as it spreads, according to a 2009 article in the L. A. Times. Recent studies follow its appearance in other countries downwind of eastern Africa where it originated, including Yemen and Iran (where revolutionaries are already protesting rising prices and shortages), which opens the possibility of its emergence further downwind in Central and Eastern Asia. The race is on to breed resistant plants before it reaches Canada or the U.S. But it can take a decade or more to create a universally adaptable new genetic line that is resistant to a new disease like stem rust that can travel much faster than that. The current spike in the price of wheat is due in part to Ug99 which might properly be renamed “Ugh.”

4) Climate instability. Bad — uncongenial — weather has lately devastated crops in the upper Midwest, Florida, Mexico, Russia, China, Australia, parts of Africa and elsewhere. Many climate scientists believe we’ve passed the equivalent of peak friendly and familiar weather, too. And while increasing heat will bedevil harvests, intense cold, downpours and flooding, drought and destructive storm systems will make farming an increasingly hellish occupation if profit is what’s being farmed for. The transitional climate will be unpredictable from season and will produce more extremes of weather and weather-related disasters which means farmers will not be able to assume much about growing seasons, rainfall patterns and getting crops through to harvest. If the past is precedent, the transition from the climate we’ve been used to for 10,000 years to whatever stable climate emerges out of climate chaos next, could take decades, centuries or even millennia. Especially if we keep messing with it. When a whole nation’s or region’s staple crops, especially grains, are lost or on-again-off-again, everything down the line from the crops themselves become more expensive, from meat, poultry and dairy to every kind of processed food. I.e., the food we shop for as if supermarkets were actually where food comes from.

5) The roller-coaster economy. This isn’t the place for me to offer my explanation for the probability of global economic collapse. (Source.) No pundits, talking-heads or economic analysts (well, very few) deny there are rough economic times ahead. Even many of the cautious among them acknowledge that we may be looking at five or six years of high unemployment and many of the lost jobs won’t be coming back. The less cautious, like me, predict the collapse of the whole fossil-fueled, funny-money, inequitable, overly-complicated global economic system in the lifetimes of anyone under 50. Well, at the rate we’re going in all the wrong directions politically and economically, I hazard the guess, anyone under 80.

Clearly, depending on the present system to provide us with most or all of our food reliably or long-term, is unwise in the extreme. Which is how we get back to why we need to garden as if our lives depended on it. Bringing food production processes and systems closer to home is going to prove vital to our survival. We need to take producing our own and each other’s food as seriously as we’ve taken producing a money income because growing numbers of us won’t have enough money to buy food in the conventional ways and there will be less of it to buy. So what’s our recourse? 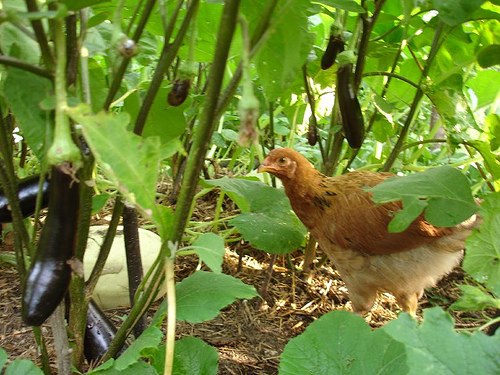 Under the influence and auspices of the prevailing economy, most Americans have forgotten how to provide for themselves. We’ve become accustomed to earning money with which we buy provisions. That process is about the have the legs kicked out from under it. Instead of earning money (or its funny-money kin like credit cards) to buy the things we need, we’ll need to start providing more of those things for ourselves and each other locally and (bio)regionally. Gardening — and small-scale farming — while they will need to be undertaken in a businesslike fashion will be less about doing business than about everyone’s having something to eat and more people being busy providing it. And while not everyone will be able to garden or farm, we are all able to get up close and personal with those who do.

Sustainable farming and organic agriculture are becoming more of a necessity rather than a choice.  Growing your own food in an eco-friendly, sustainable way not only saves money and leads to healthier living but it could get you and your family through hard times and disasters.  Worm farming is highly beneficial to plants and soil; see Worm Composting or watch a video on how to make your own worm farm.  Also get some valuable tips from How to Garden Sustainably.