Can Geoengineering Save Australia?

High-tech and low-carbon travel trends for 2011

When you’re dying for a lower carbon footprint 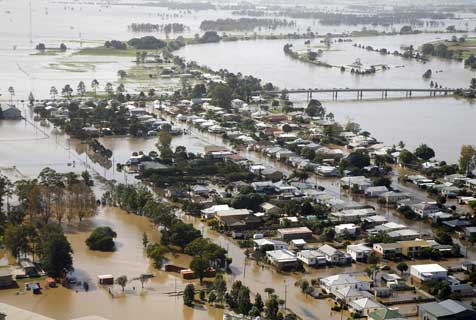 Australia’s “worst flood disaster in living memory” threatens to swamp Brisbane, the country’s third-biggest city, reports The Australian. “It might be breaking our hearts at the moment,” said Queensland Premier Anna Bligh. “It won’t break our will.”

While floods hit northeastern Australia, southern Australia has been suffering through the worst drought in its history, one that has lasted a decade. In 2009, The Washington Post described the Outback as a “crematorium for kangaroos, livestock and farm towns.”

“They’re optimistically calling it a drought,” says the veteran climate scientist Michael MacCracken. The drier conditions in Australia’s major agricultural areas appear to be a result of a shift in the storm track to the south, he says: “It’s not a drought. The Sahara isn’t having a drought. It looks instead to be climate change.”

MacCracken, who is the chief scientist at the nonprofit Climate Institute, has worked on climate issues since he wrote his PhD. dissertation in the 1960s, using an early climate model to investigate the possible causes of climate change. During the 1970s and 1980s, he worked under physicist Edward Teller, an early advocate of geoengineering, at the Lawrence Livermore National Laboratory. He then spent about a decade in Washington directing the government’s U.S. Global Change Research Program and Climate Change Impact Assessment.

MacCracken is deeply interested in geoengineering. He was lead author of a section on geoengineering in the 1995 report of the IPCC (Intergovernmental Panel on Climate Change). So, when we met recently, we got to talking about Australia, and whether geoengineering could help there.

It’s too soon to know, without further research, but MacCracken says research is exactly what’s needed. In 2009, he wrote a 11-page essay called ‘On the possible use of geoengineering to moderate specific climate change impacts’.

It’s about the potential for targeted, localized geoengineering — the idea that geoengineering techniques, including solar radiation management and cloud whitening over the ocean, could be deployed, not to cool the planet as a whole, but to alleviate “specific consequences of climate change” that are causing significant negative impacts on the environment or society:

…Among the particularly severe consequences of climate change and emissions mitigation that geoengineering might be able to beneficially moderate are the rapid warming of the Arctic, the intensification of tropical cyclones and drought …

For example, could solar radiation management be used to reduce the likelihood of extreme conditions in the subtropics, specifically, the likelihood that “wintertime storm tracks in the eastern Pacific will lock into patterns that contribute to sustained drought?”

Or could marine cloud whitening be used to limit the intensity of subtropical storms, by reducing the annual accumulation of energy stored in the upper ocean, say, in the Caribbean Sea, Gulf of Mexico or Bay of Bengal?

Likewise, might short-term, relatively small-scale injections of sulfate particles into the stratosphere or lower atmosphere be used in the summer months to reduce absorption of sunlight and thereby limit warming of the Arctic and the loss of sea ice?

We don’t know the answer to these questions, but maybe we should.

“If Australia doesn’t have a regular annual cycle of precipitation, that’s going to really change its character,” says MacCracken. Much the same can be said about the warming of the Arctic, which he’s studied closely and where indigenous people who depend on hunting and harvesting tell him that global warming threatens their way of life.

Now, before we get carried away, let me emphasize that MacCracken believes that the best strategy for dealing with global warming is “aggressive mitigation,” meaning dramatic reductions in greenhouse gas emissions. Without rapid and steep reductions in emissions, he says, climate change will get worse, and the potential to offset it with geoengineering will become more difficult, with more undesirable side effects.

Geoengineering, he says, should be seen as a strategy that might complement mitigation and adaptation, and it should be approached with great caution. He’d like to see a science-based “mission-directed approach” that would focus on determining during the next five years what might be done to save the Arctic.

Funding could go both to those exploring what could be done and those looking at the problems and side effects. “You want a red team-blue team approach,” he says, “that seeks to iteratively come up with the best possible approach — and then to decide if to go forward.”

Targeted geoengineering is appealing, in that sense, because it could be researched and tested on a smaller scale than the more grandiose plans to “hack the planet.”

“Most of the discussion about solar radiation is about trying to limit global average temperatures,” MacCracken said. “That’s a huge step. That would introduce huge governance issues, even if scientists decide it can be done.”

Instead, he asks: “Wouldn’t it be more reasonable to get started by seeking to determine if we can limit some of the worst impacts, impacts that we can’t avoid simply with mitigation, because we have been so slow to reduce emissions?”

For the moment, the U.S. government has no geoengineering strategy or research program.

Nor does the government have a broader climate change strategy.

“Now we have a Congress where people are denying even the science of climate change,” McCracken said.

Unfortunately, that’s another reason to take geoengineering seriously — because the longer we wait to reduce greenhouse gas emissions, and limit CO2 concentrations in the atmosphere, the harder it will be avoid serious impacts.

It is inevitable that we will have to adapt to climate change as there is very little we can do to reverse the effects in the short term.  Hopefully lessons have been learnt in the past regarding modifying the habitat to suit us- it usually ends up back-firing if we destroy the ecosystems around us.