Solar Power to the People

Rinspeed builds a car of bamboo 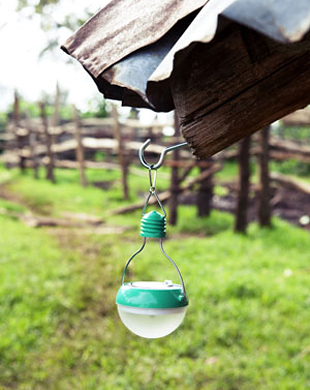 Kerosene lamps are a fact of life in all too much of the developing world, despite their toxic and polluting nature. We’ve already seen a few different efforts to change this — through microloans for green energy, for instance — but recently we came across another: a solar-powered light bulb.

Just launched this week by Denver- and Hong Kong–based Nokero (which stands for “no kerosene”), the Nokero N200 lasts six or more hours on one day’s charge and is affordable to the billions of people worldwide who live without reliable access to electricity. The N200 is a new, improved version of Nokero’s N100, which launched in June, and offers 60 percent greater brightness, the company says. Featuring one solar cell and four LEDs along with a brandable frosted globe, the bulb uses the solar energy it collects to power one AA-sized, 1.2 V, 1000mAh, replaceable and recyclable Ni-MH battery, which is used to provide light at night. The Nokero automatically turns off in bright light to save energy; it also features a multi-switch that can be set to high, low or off. Like the N100, the N200 is rainproof and durable so it can withstand outdoor use in tough conditions, ranging from -20°C to 55°C. With a pivot feature for maximal solar charging, the bulb can be hung or laid on its side. A video posted on YouTube demonstrates the bulb in use (see below):

Priced starting at $15 (U.S.) per bulb, the Nokero N200 is already being used in Pakistan and Kenya, and it will soon arrive in Iraq, where it will help people in the war-torn country avoid the high cost of running diesel generators for light at night. More than one million people die each year in fuel-based lighting fires, and an additional 1.6 million are estimated to die from indoor air pollution, says Nokero, which also offers a “buy one, give one” program with discounted prices. A functional solution to spread around the world!

Light seems to be synonymous with human development and civilization, the earliest form of man-controlled light be from fires.  Humans have used light to extend their waking hours and spare time, probably leading to more creativity- the seed of inventions and innovations.  Solar lights distributed amongst the poor may have many unexpected positive results.  Of course, light is also used for security and to ward off dangerous animals.  Hopefully a product such as this will become widespread- not only will it assist in human social upliftment but the environmental benefits are great too.