Scientists at Washington State University have proposed a renewable energy behemoth: A solar sail that traps solar wind deep in the atmosphere. 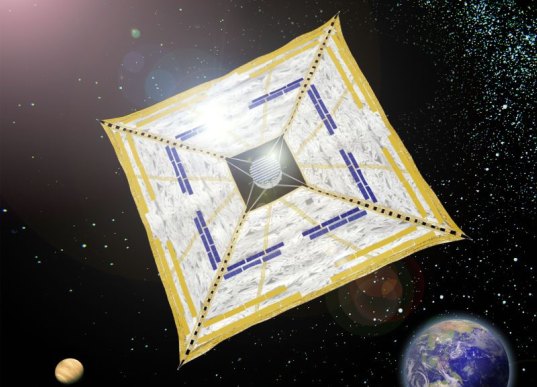 The idea is essentially splicing traditional solar and wind renewable principles, only on a far, far larger scale. To put the sheer size of the sail in perspective, the sail proposed will be 5,220-miles-wide – which is almost the same width at Russia from east-to-west – that will float in space and collect electrons radiating from the sun at hundreds of miles per second, pass these particles to a central spherical receiver, which produces a current.

To further highlight the energy capabilities of such a monster, the scientists have stipulated that 984-feet of copper wire attached to a 6.6-foot-wide receiver with a 33-foot sail would generate the energy necessary to power 1000 homes.

In principle the scientists say the concept could generate 1 billion, billion gigawatts of power, far more power than humanity need. The only problem? Transferring the collecting energy the millions of miles back to earth.

“It’s quite amazing how much power it can actually produce,” said Dirk Schulze-Makuch, a scientist at Washington State University and a co-author of the paper, which appears in the International Journal of Astrobiology. “In principle it should work quite well, but there are some practical issues.”

The practical issues, aside from the sci-fi-esque nature of a Russia-wide sail floating millions of miles above the earth’s surface, is how to transfer the energy captured on the sail’s surface back to the earth for consumption, without losing the majority of it to deep space.

Of the electricity collected, a small majority would be used to power the sail’s magnetic field; the rest would be lasered back to earth by strategically placed satellites, in a kind of intergalactic game of crack the whip.

However the distances between satellites are extreme, which mean that the laser would spread to thousands of miles wide, according to John Mankins, president of solar power consulting firm Artemis Innovation. He is quoted in New Scientist saying you would need “stupendously huge optics, such as a virtually perfect lens between maybe 10 to 100 kilometers (6.2 to 62 miles) across,” to capture the laser.

If this brilliant idea could be made into a practical reality, much of the world’s energy issues could be resolved in a clean, sustainable way.  While scientists continue with their work, there is an urgent need for practical renewable energy.  Conventional solar photovoltaic solar panels and solar water heaters have improved in efficiency and come down in price over the past few years.  Replacing an electric geyser with a solar water geyser can save a homeowner up to 50% of household electricity bills.  In South Africa, solar geysers typically amortize their initial cost within 36 months (at current Eskom tariffs).  Apart from financial savings, solar power is one of the cleanest renewable energy sources available- environmental benefits are huge.