By admin on October 28, 2010 in climate change, rainwater harvesting, water and conflict

For thousands of years, nomadic herdsmen have roamed the harsh, semi-arid lowlands that stretch across 80 percent of Kenya and 60 percent of Ethiopia. Descendants of the oldest tribal societies in the world, they survive thanks to the animals they raise and the crops they grow, their travels determined by the search for water and grazing lands. 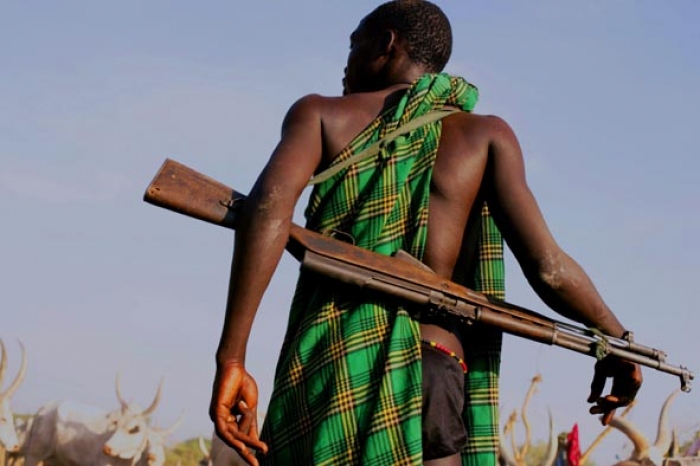 These herdsmen have long been accustomed to adapting to a changing environment. But in recent years, they have faced challenges unlike any in living memory: As temperatures in the region have risen and water supplies have dwindled, the pastoralists have had to range more widely in search of suitable water and land. That search has brought tribal groups in Ethiopia and Kenya in increasing conflict, as pastoral communities kill each other over water and grass.

“When the Water Ends,” a 16-minute video [watch video] produced by Yale Environment 360 in collaboration with MediaStorm, tells the story of this conflict and of the increasingly dire drought conditions facing parts of East Africa. To report this video, Evan Abramson, a 32-year-old photographer and videographer, spent two months in the region early this year, living among the herding communities. He returned with a tale that many climate scientists say will be increasingly common in the 21st century and beyond — how worsening drought in parts of Africa, the Middle East, and elsewhere will pit group against group, nation against nation.

As one UN official told Abramson, the clashes between Kenyan and Ethiopian pastoralists represent “some of the world’s first climate-change conflicts.”

But the story recounted in “When the Water Ends” is not only about climate change. It’s also about how deforestation and land degradation — due in large part to population pressures — are exacting a toll on impoverished farmers and nomads as the earth grows ever more barren.

The video focuses on four groups of pastoralists — the Turkana of Kenya and the Dassanech, Nyangatom, and Mursi of Ethiopia — who are among the more than two dozen tribes whose lives and culture depend on the waters of the Omo River and the body of water into which it flows, Lake Turkana. For the past 40 years at least, Lake Turkana has steadily shrunk because of increased evaporation from higher temperatures and a steady reduction in the flow of the Omo due to less rainfall, increased diversion of water for irrigation, and upstream dam projects. As the lake has diminished, it has disappeared altogether from Ethiopian territory and retreated south into Kenya. The Dassanech people have followed the water, and in doing so have come into direct conflict with the Turkana of Kenya.

The result has been cross-border raids in which members of both groups kill each other, raid livestock, and torch huts. Many people in both tribes have been left without their traditional livelihoods and survive thanks to food aid from nonprofit organizations and the UN.

The future for the tribes of the Omo-Turkana basin looks bleak. Temperatures in the region have risen by about 2 degrees F since 1960. Droughts are occurring with a frequency and intensity not seen in recent memory. Areas once prone to drought every ten or eleven years are now experiencing a drought every two or three. Scientists say temperatures could well rise an additional 2 to 5 degrees F by 2060, which will almost certainly lead to even drier conditions in large parts of East Africa.

In addition, the Ethiopian government is building a dam on the upper Omo River — the largest hydropower project in sub-Saharan Africa — that will hold back water and prevent the river’s annual flood cycles, upon which more than 500,000 tribesmen in Ethiopia and 300,000 in Kenya depend for cultivation, grazing, and fishing.

The herdsmen who speak in this video are caught up in forces over which they have no real control. Although they have done almost nothing to generate the greenhouse gas emissions that cause global warming, they may already be among its first casualties. “I am really beaten by hunger,” says one elderly, rail-thin Nyangatom tribesman. “There is famine — people are dying here. This happened since the Turkana and the Kenyans started fighting with us. We fight over grazing lands. There is no peace at all.”

Globally, water scarcity is causing anxiety that could trigger war. Wars have been triggered over far less important resources- water is a basic necessity so as the world’s population grows and our water resources are depleted and polluted, the more water will be at the centre of conflicts.

Water, in the form of rain, is still free for most citizens of the world (although harvesting rainwater is still illegal in some US states!).  The environmental benefits of rainwater harvesting are substantial, not to mention the reduction of water utility bills.  Rainwater harvesting is an option for many people; this empowers and ensures a degree of water self-sufficiency.  Rainwater harvesting, when combined with gray water systems and other water-saving devices, a household can become totally water independent in some instances (depends on local rainfall patterns and water storage capacity).

Water Rhapsody’s rainwater harvesting system integrates with your existing water supply (be it municipal, borehole or other) and can be instantly switched from one source to the other when required.  Water tanks are core to many of our WWF Award-winning water conservation systems- we are water tank dealers for JoJo Tanks and Atlas Plastics in Mpumalanga and Limpopo as well as the rest of South Africa.  We can supply a wide range of JoJo water tanks and JoJo tank stands as well as most of the high quality water tanks and other products made by Atlas Plastics.  Solar energy is synergistic with water; we have incorporated Yes Solar Mpumalanga in order to offer SABS- and Eskom-approved Solsquare solar water heaters (all installed by qualified solar installers).  All our Water Rhapsody and Yes Solar systems not only save water and save energy, they save the environment while you save money too!

Navajos look to move away from coal in favor of sun and wind
U.S. Subways Harness Kinetic Power To Recycle Train Energy