By admin on June 26, 2010 in environmental problems, water pollution

After actor Kevin Costner spent weeks calling attention to a high-tech oil cleanup device his company spent years developing, BP tested the machine and overnight released a statement saying that not only does the device work, officials are “excited” about its potential. 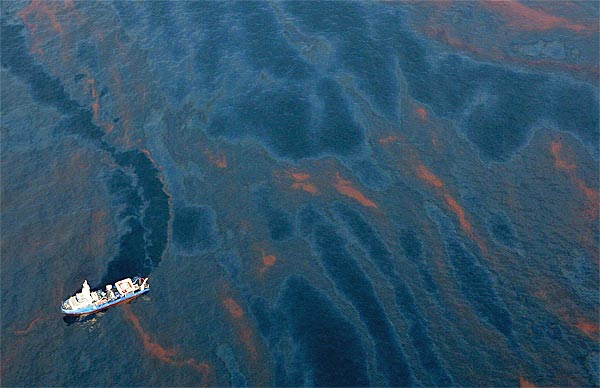 “We were confident the technology would work but we needed to test it at the extremes. We’ve done that and are excited by the results,” said Doug Suttles, BP’s chief operating officer. “We are very pleased with the results and today we have placed a significant order with OTS [Costner’s Ocean Therapy Solutions] and will be working with them to rapidly manufacture and deploy 32 of their machines.”

The machine is a centrifuge designed to separate spilled oil from water and, according to Costner, could be instrumental in cleaning up the massive oil slick expanding in the Gulf.

Costner has spent the past 15 years and more than $20 million of his own money to develop the oil separator, which during successful testing, left water 99 percent clean of crude.

“If 20 of my V20s [machines] would have been at the Exxon Valdez, 90 percent of that oil would have been cleaned up within the week,” he said, referring to one of the models of the oil separators.

That spill occurred off the coast of Alaska when the supertanker Exxon Valdez hit a reef in 1989. Approximately 11 million gallons of oil spilled into Prince William Sound, causing widespread harm to the local wildlife, environment and economy.

“When I saw everyone on the shore with rubber boots and pitch fork, trying to clean up the problem that they didn’t create, you know, the images of the birds, it was all very sad,” the “Field of Dreams” star said, speaking of the devastating effects of the Exxon Valdez spill. In the interview that today on “Good Morning America,” he added: “So I went ahead and said, ‘does this have to happen?'”

Costner started his own company, Costner Industries, and bought the patent for the technology.

The devices, which can be taken to the spill site via barges, come in different sizes. The largest can clean water at a rate of 200 gallons per minute, according to the firm.

Depending on the water-to-oil ratio, the devices are capable of extracting 2,000 barrels of oil per day from the gulf.

The actor and representatives of Ocean Therapy Solutions , the firm that developed the machine, demonstrated the centrifugal device for BP officials in New Orleans last month.

“The machines are basically sophisticated centrifuge devices that can handle a huge volume of water and separate at unprecedented rates,” said Ocean Therapy Solutions CEO John Houghtaling. “They were developed from older centrifuge technology. Normal centrifuge machines are very slow and sensitive to different ratios of oil to water mixtures at intake.”

BP is currently testing the machines.

During the initial test, the machine failed to work because the oil had been transformed to a peanut butter-like thickness due to the effects of the dispersants. The machines were then adjusted to handle the thick consistency, and now they work as intended, Costner’s publicist said.

Costner hopes the machine will be headed to the Gulf soon.

BP has been struggling to stop a torrent of oil pouring into the gulf since an underwater explosion sank the Deepwater Horizon drill rig in April, killing 11 rig workers and creating an unprecedented environmental catastrophe.

Costner is confident the oil separator can make a difference, but says for the past 12 years he’s been frustrated by the government’s and oil companies’ lack of interest in his and other technologies.

In testimony before the Congress last week, Costner acknowledged the improbability of his involvement.

“It may seem like an unlikely scenario that I am the one delivering this technology at this moment in time, but from where I’m sitting, it is equally inconceivable that these machines are not already in place,” he said.

Pointing out that oil was already “a very big part of American life,” he said there has to be a responsible way to deal with the inevitable consequences of such dependence.

He said the oil separator represents an opportunity to be proactive in the face of future spills. “It represents maybe an opportunity for an industry to go back to work. If we can show that there’s a responsible answer to an inevitable problem. This little life preserver, this machine … this could be a pivot point …,” he said. Costner said BP had ordered 32 of the machines. While he acknowledged that a great deal of damage had already been done in the Gulf, he said the machines could still mitigate much of the problem. “It’s not too late … That oil’s going to keep coming towards those people. That well has not stopped. So we have to be out at the source, sucking it up … I mean, we have to treat it a little bit like war,” he said. “We mustered logistically everything we had to get the beaches of Normandy. We have to muster everything we can to keep it from hitting our beaches.”

‘I’ve Got a Life Preserver’

It’s personal to Costner, who can see an oil rig off the shore of his Carpinteria, Calif., home, where schools of dolphins often swim by. “I’m not a spokesman for anybody … but the ecosystem can’t speak for itself,” he said Monday. “I’m not a spokesman except for the fishermen who … can’t speak for themselves. They’re wondering where an answer is.

This technology has been developed and refined over many years and hopefully the machines will perform well (and that the weather holds up!).  Anything that could mitigate and prevent further environmental damage should be tried, no matter what the financial cost (money is useless once the environment has been destroyed).  It is sad that a private entity has had to lobby BP and the US government for so long before they got noticed.  If these oil separators could have been deployed on the day of the disaster, perhaps we wouldn’t be facing the current spreading of the oil. Hopefully our children and future generations will not have to deal with fossil fuel disasters and that clean, sustainable energy sources will have replaced dirty, environmentally damaging sources.

A Water Crisis is Threatening the World
Groundwater Pollution: An ever-increasing problem