ScienceDaily (Mar. 14, 2010) — A low-cost water purification technique published in Current Protocols in Microbiology could help drastically reduce the incidence of waterborne disease in the developing world. The procedure, which uses seeds from the Moringa oleifera tree, can produce a 90.00% to 99.99% bacterial reduction in previously untreated water, and has been made free to download as part of access programs under John Wiley & Sons’ Corporate Citizenship Initiative. 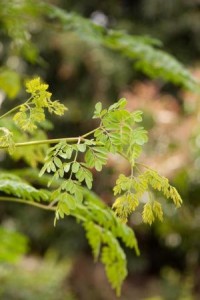 A billion people across Asia, Africa, and Latin America are estimated to rely on untreated surface water sources for their daily water needs. Of these, some two million are thought to die from diseases caught from contaminated water every year, with the majority of these deaths occurring among children under five years of age. Michael Lea, a Current Protocols author, and a researcher at Clearinghouse, a Canadian organisation dedicated to investigating and implementing low-cost water purification technologies, believes the Moringa oleifera tree could go a long way to providing a solution.

“Moringa oleifera is a vegetable tree which is grown in Africa, Central and South America, the Indian subcontinent, and South East Asia. It could be considered to be one of the world’s most useful trees,” said Lea. “Not only is it drought resistant, it also yields cooking and lighting oil, soil fertilizer, as well as highly nutritious food in the form of its pods, leaves, seeds and flowers. Perhaps most importantly, its seeds can be used to purify drinking water at virtually no cost.”

Moringa tree seeds, when crushed into powder, can be used as a water-soluble extract in suspension, resulting in an effective natural clarification agent for highly turbid and untreated pathogenic surface water. As well as improving drinkability, this technique reduces water turbidity (cloudiness) making the result aesthetically as well as microbiologically more acceptable for human consumption.

Despite its live-saving potential, the technique is still not widely known, even in areas where the Moringa is routinely cultivated. It is therefore Lea’s hope that the publication of this technique in a freely available protocol format, a first, will make it easier to disseminate the procedure to the communities that need it.

“This technique does not represent a total solution to the threat of waterborne disease,” concluded Lea. “However, given that the cultivation and use of the Moringa tree can bring benefits in the shape of nutrition and income as well as of far purer water, there is the possibility that thousands of 21st century families could find themselves liberated from what should now be universally seen as19th century causes of death and disease. This is an amazing prospect, and one in which a huge amount of human potential could be released. This is particularly mind-boggling when you think it might all come down to one incredibly useful tree.”

Nature has again provided humans with a simple solution to a big problem.  Water quality issues are sometimes more pressing than water availability, especially in rural areas.  Grey water and raw sewage can easily contaminate an otherwise abundant source of water.  In the long term, rural communities need to be educated about water conservation and the implications of polluting their water resources.  Rainwater harvesting, rainwater tanks and grey water systems are a step in the right direction (greywater systems also reduce the amount of sewage entering our rivers and dams).  The use of Moringa oleifera to make drinking water safe and more palatable would be helpful to poor communities who live in the former homelands such as those found in Mpumalanga and Limpopo.  As with all exotic plant and animal species, care must be taken to ensure that they don’t become an alien invasive.  Water Rhapsody franchises are located throughout South Africa.  Water Rhapsody Mpumalanga has incorporated Yes Solar Mpumalanga in order to offer holistic solutions to the water and energy crisis we are facing.  Solar energy is a clean, green renewable energy source that is never depleted! Yes Solar markets and supplies Solsquare solar water heating systems that are installed by qualified solar installers.  We are also authorized dealers for JoJo Tanks (we supply and install the full range of JoJo water tanks and tank stands at excellent prices!).  Contact us for a free quote on a water system, water tank or solar geyser.