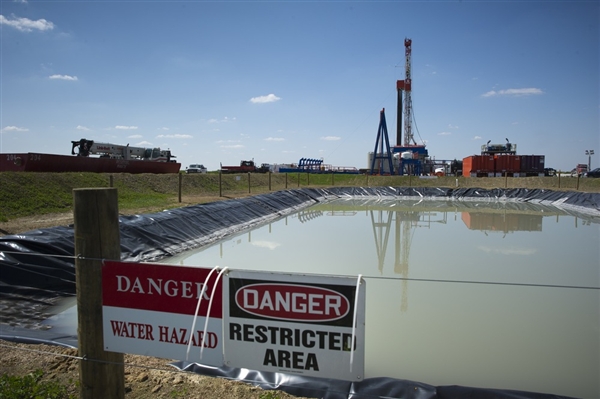 As far as interrelated water and energy challenges go, the case of the natural gas drilling method known as fracking is a doozy. Natural gas has been touted as a relatively cheap, less-polluting replacement for coal and petroleum, and that’s fine as far as global warming management goes.

But on a local level, here in the U.S., evidence is steadily mounting that the vast quantities of chemical-laced water used in fracking can contaminate local water resources, put public health at risk, and disrupt communities that are already under economic distress.

Fracking is about to get a public awareness boost from the new Matt Damon movie Promised Land, but that’s only part of the picture. Aside from the local impacts of both drilling and wastewater disposal, the fracking boom has already had a ripple effect on another water-energy nexus, involving coal.

Here in the U.S., coal mining has been a significant source of water contamination for generations. Researchers have also drawn a connection between long-term economic malaise and negative public health outcomes in coal mining regions.

One solution, of course, is to replace coal with less polluting forms of energy, and that is exactly what has been occurring in the U.S. as wind, solar, and other alternatives come on line. However, at least for the time being, natural gas has been chief among the alternative fuels replacing coal at U.S. power plants.

That has factored into an increase in pressure to export coal, with a consequent impact on local port communities and greenhouse gas emissions related to transportation.

The fracking boom in new areas like the Marcellus shale region has also set off an internal chain reaction, squeezing some older-gas producing states out of the domestic market. In consequence, legislators from those states have begun pressing for more natural gas exports.

Combine the coal, gas, and alternative energy trends together and ultimately you have a scenario under which the U.S. invests billions in developing safer, healthier domestic renewable energy resources, while fossil fuel production continues to put local communities and their water resources at increasing risk in order to supply overseas markets.

To add insult to injury, researchers are beginning to question whether or not natural gas really is a less-polluting fossil fuel than coal, due to methane leakage at drilling sites among other issues.

That brings us right up to the question for bloggers posed for the upcoming international conference, Abu Dhabi Sustainability Week 2013: “What steps can individuals, businesses or world leaders take to address the most pressing and often interrelated water and energy challenges?”

The answer is obvious to anyone who has undergone a 12-step program: admit that water and energy are bound at the hip (not just “often interrelated”), learn from past mistakes, adopt new behaviors, and help others who are trying to do the same.

That doesn’t mean it’s going to be easy, but a good place to start, here in the cradle of democracy, would be to ensure that local citizens have the regulatory framework, legislative support, and access to the information they need in order to make rational choices and reach collective decisions by vote and by compromise, working together to have a real say in determining their future.

The question of fracking is a highly contentious one but one of the main reasons for the controversy is that the effects of fracking are not well known. Some downplay the potential negative environmental effects in order to gain financially.  Others genuinely believe that fracking is more eco-friendly than other mainstream power generation methods.  However, interview anybody living within a few kilometres of a fracking operation and see what these people have to say about how the drilling is contaminating their water and degrading surface ecosystems too.  South Africa’s fracking exploration in the Karoo region is of a major concern considering that the area is already extremely arid and that the only water available is generally groundwater (which will, to a greater or lesser extent, be contaminated by fracking operations).  Those unfortunate people living near to natural gas drilling sites will have to resort to other means of obtaining safe drinking water, like rainwater harvesting and rain water tanks.