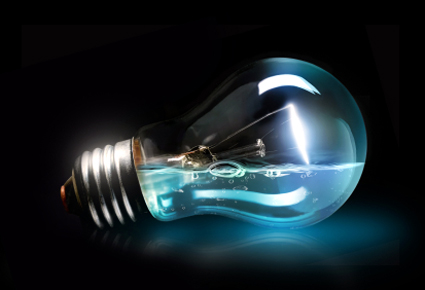 So you got your new compact fluorescent lightbulbs. Now you’re wringing your hands over how to dispose of them so that you don’t unleash toxic mercury into the environment. An improvement? Or just another example of politicians and environmentalists trying to push us around?

Sure CFLs save electricity, but so do a lot of other efforts. In fact, in a new study (“Evaluating the energy consumed for water use in the United States“) University of Texas scientists Kelly Sanders and Michael Webber reveal the counterintuitive conclusion that water conservation could have an enormous impact on energy conservation.

Save water and you save energy. Here’s why.

The United States, uses 410 billion gallons of water every day, according to the U.S. Geological Survey. Think of all the energy expended in pumping that water, treating it, spraying it on crops, heating it for your shower, making it into ice, Coca-Cola, paper, and on and on. These core uses (what they refer to as direct water and steam services in the commercial, residential, industrial and power sectors) eat up 12.3 quadrillion BTU per year. That’s 12.6% of primary energy use in the United States, or the equivalent energy consumption of 40 million Americans.

Add in indirect water use, such as steam generated in coal-fired power plants to spin turbines to make electricity, and you tack on another 34.1 quadrillion BTU.

Together, the amount of energy tied to water consumption totals just under half of all the energy this country uses. So the connection is clear: cut down on water use and you cut down on energy use.

Where to focus? Well the breakdown of who uses how much water in what ways is kind of surprising. Residential use was just 7.2% and commercial use is 3.4%. The researchers found that for residential users heating water (showers, clothes washers, cooking, hot tubs, etc) accounted for 75% of water-related energy use. But because the residential share of the pie is relatively small, what we as individuals do doesn’t matter that much in the scheme of things.

Much bigger impacts? Irrigation of crops and golf courses and other landscaping takes up 31.2% of water consumption. While the biggest user is power generation, with 49% of all water use.

Getting all that water to fields can be expensive. In California, for instance, the energy cost of piping water between basins amounts to roughly 13,000 kwh per million gallons.

And consider the electricity that needs to be generated to move and heat all that water. Based on the efficiency rates of industrial boilers and power plants, the researchers figured that 58% of the total primary energy consumed for water-related purposes is “rejected” or lost as waste heat. Indeed, on the tiny residential scale think about how much energy is wasted when you heat up a whole kettle of water to make just one cup of tea. Expand that idea to the industrial scale and it’s easy to see how much energy is wasted in our aqua-economy.

Sanders and Webber propose some solutions, or at least areas where politicians and conservationists should direct their attentions.

“Firstly, economies of scale, such as those in the Industrial sector and large commercial facilities, are typically more efficient than those that are smaller in scale, such as individual households. Secondly, when considering end-to-end efficiency, it is much less energy-intensive to heat water by direct use of natural gas on-site, rather than by using that natural gas to first make electricity that is used to heat water because of the large conversion losses at power plants. From the perspective of displacing fossil-fuel use, solar thermal water heater systems are even more advantageous.”

So there you have it. Water users, from residential to commercial, to even industrial sites could dramatically reduce their water-energy by using the sun.

The researchers found that the energy used in pumping, treating, heating, cooling and pressurizing water in the U.S. is about 25% more than all the energy burned in all the lightbulbs in homes and businesses.

A conclusion: reducing hot water consumption or investing in energy-efficient heating “might have just as much impact” as the excessive policy attention paid to new-fangled light bulbs.

This is another clear example of how water and energy are linked.  Conserving energy and water has obvious environmental benefits but these actions also save money.  For saving energy, solar water heaters are great for sunny South Africa which should also be combined with rainwater harvesting tanks to maximise the water savings, environmental benefits and reduction of electricity and water bills.  Rain water tanks on a property also reduce dependence on municipal water supply – especially important in South Africa where many municipalities are struggling to supply safe and reliable water services.  To see the various JoJo Tanks water tanks, rainwater tanks, tank stands, septic tanks and other JoJo tanks products, click on the links below.