A mission to land Europe’s first spacecraft on the Moon is to search for water that could be used to help astronauts survive during future manned visits to the lunar surface. 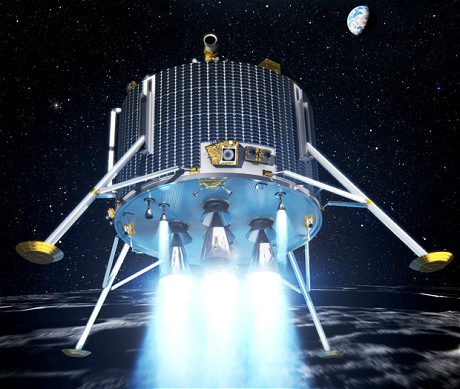 Pole star: Europe’s craft will be the first to seek water in a polar region

It could be the plot of a science fiction novel: a mission to find water on the moon, paving the way for man to settle on its surface.

But by 2018 a mission which includes British technology hopes to have landed a robot probe on the surface of the Moon to find out if it has ice present under the surface.

Finding ice would upend scientific orthodoxy and the results of previous lunar missions, which suggested that the Moon was dry.

The £500 million voyage, scheduled for 2018, is being planned by the European Space Agency, of which Britain is a leading member.

It will also be man’s first attempt at landing an object on the south pole of the Moon.

Dr Simon Sheridan, a research fellow at the Open University who is part of the team designing instruments for the spacecraft, said: “We want to see if the resources are there to let astronauts live off the land.

“There is evidence of vast deposits of volatile chemicals like water from orbiting missions, but this will be the first ground-based mission to look in a polar region.”

The Lunar Lander, the size of a car and weighing about 1,800lbs, will blast off from Earth by rocket, then detach and descend to the Moon’s surface in a 12-minute flight.

An artificial intelligence system, directing engines and rocket propulsion, will help the craft to avoid craters and boulders as it comes into land at the Moon’s south pole.

At its landing spot, it will bore a few inches into the ground. A key instrument designed by British scientists will analyse the soil and beam the results by radio signal back to Earth.

If Lunar Lander is successful, it would open up the prospect of settling on the Moon.

Water is heavy and expensive to transport into space, so extracting it from the lunar surface would be a major step towards helping people live on the Moon – mirroring the plot of the Tintin cartoon book Explorers on the Moon, published 60 years ago, which portrays it as having caves filled with ice.

Experts have long believed that the Moon’s surface was completely arid. Recent measurements from orbiting spacecraft, however, have suggested that water may exist in the soil, with large deposits at its poles and in the shadows of meteor craters.

Richard Fisackerly, Lunar Lander spacecraft engineer at ESA, added: “We want to target very specific surface sites. We hope to carry out more ambitious missions in the future where we might want to land a sample return vehicle near to another lander.

“As well as testing the technology there is a lot of science to be done. We hope to investigate the environment there, what the properties of the dust are and look for oxygen, hydrogen and even water in the form of ice.”

Lunar exploration has previously been dominated by the United States and the Soviet Union. Only the Americans have put men on the moon, with the last Apollo landing in 1972.

The ESA, based in Paris, has 19 member nations which provide 80 per cent of its funding, with the European Union providing the remaining 20 per cent. Science ministers from the member nations are due to meet later this year to discuss further funding for the mission.

Bérengère Houdou, Lunar Lander project manager at ESA, said: “The primary goal of the mission is to place Europe in a strategic role in the future exploration of the Moon.

“The kind of landing we are trying to do will be much more accurate than what the Russians and Americans tried before. We are aiming for a specific landing site so it will need to navigate itself while avoiding any hazards on the ground.

“We have been doing some tests on the engines in the past month and had some quite positive results already.”

Source: The Telegraph (By Richard Gray)

If water is found on the moon, hopefully the extraction and use of it will be done in an environmentally sensitive manner.  The Earth’s water resources have been over-exploited, wasted and polluted but awareness is growing and many are taking steps to better look after this precious resource.  To obtain your own free water, rainwater harvesting is the answer.  Check out the huge range of JoJo water tanks, JoJo rainwater tanks, JoJo tank stands and other JoJo products by clicking on the links below.

Fracking: Methane found in drinking water across Texas
Domestic water recycling in Israel should be encouraged