Eskom aims to reduce its water consumption by 260 billion litres a year by 2030. 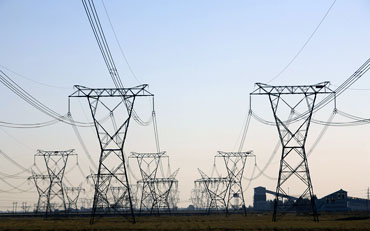 The utility said the alternative technologies used at its new power stations would reduce the water requirement to 270 billion litres by next year. The company would have needed 530 billion litres to operate its coal-fired stations had the new measures not been put in place.

Eskom consumed 327 billion litres of water in the 2010/11 financial year. It used about 1.35 litres of water to generate a kilowatt-hour of electricity, making Eskom responsible for about 2 percent of South Africa’s fresh water usage.

But the roll-out of dry cooling and alternative technologies will see Eskom bring down water consumption relative to power produced to 0.99 litres a kilowatt-hour by 2030.

South Africa is a water-stressed country and environmental groups have previously challenged the building of Eskom’s new coal plants, citing water competition they would bring to local communities.

However, in its “Eskom factor” report, the utility said both Medupi and Kusile would use dry-cooling technology. This would reduce water consumption per unit of electricity produced by as much as 90 percent.

“They are dry cooled, so (they) use only about a tenth of the water that conventional wet-cooled power stations require. So this is why we say Medupi and Kusile are ‘cleaner coal’ than our older coal-fired stations,” Eskom spokeswoman Hilary Joffe said.

Apart from investigating the use of mine water in the future, Eskom said it was looking at other improved water management strategies, including cold lime softening, a filtering technology that uses less water than conventional methods.

On “cleaner coal” technology, Joffe said the new power stations’ relative carbon dioxide (CO2) emissions, in terms of tons of CO2 per unit of electricity sent out, were as much as 25 percent less than the average for the existing coal-fired fleet.

“That is mainly because they employ super-critical combustion technology, which is much more efficient,” said Joffe.

In the 2011 financial year, Eskom emitted a total of 230 million tons of CO2 into the atmosphere, at a rate of 0.96kg of CO2 per kWh of electricity produced.

The “Eskom factor” report showed that when benchmarking Eskom’s carbon footprint against a set of seven leading developed and developing economies, the utility ranked as the second-highest CO2 emitter.

But Medupi and Kusile would emit about 15 percent less CO2 per megawatt-hour of electricity generated compared with the rest of the coal fleet.

It was estimated that relative carbon emissions could be reduced to 0.68kg per kilowatt-hour by 2030, in which case emissions of CO2 would be at least 100 megatons less than what they would have been, had Eskom continued with current generation technology.

The power utility also said it expected to reduce particulate emissions to 0.21kg per megawatt-hour by 2016/17.

Electricity and water are inextricably linked and when you conserve one you conserve the other, whether directly or indirectly.  A small example is rainwater harvesting where rain water is collected from a rooftop and channelled into a rainwater tank or water tank using gravity and thereafter used for household use or irrigation, also using gravity- no electricity is used.  So installing rain water tanks and gravity fed water supply, you are not only saving electricity but also playing a part in water conservation and ultimately helping the environment.

South Africa: Local innovator takes water out of showering
Save Water Without Compromising Your Garden’s Beauty