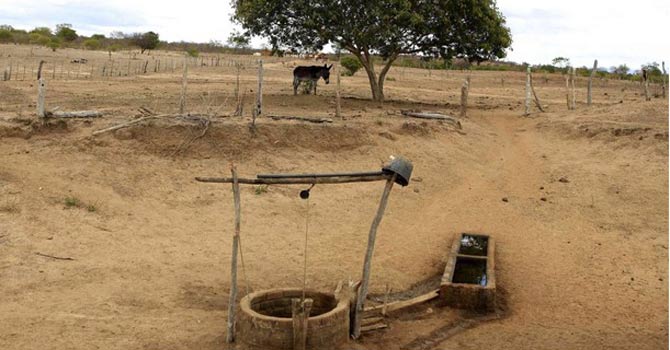 Rio de Janeiro – Severe drought gripping north-eastern Brazil – the worst in a half-century – is taking its toll on more than 1 100 towns, even triggering fighting in rural areas, local media reported on Sunday.

An average of one person a day is being killed in “water wars” in rural areas, while scores of animals are wasting away before perishing, the O Globo newspaper reported over the weeekend.

Short water supplies have devastated farm output, endangering the lives of local people and their livestock, the report said.

Many people in the area have lost half their livestock, and the Brazilian government has reduced forecasts for corn, soy and bean crops.

In Pernambuco, 66 municipalities are on water emergencies, rivers have run completely dry and animals looking for water in the riverbed can only find the odd muddy puddle.

Local dams in the region are running dry, and abuses are rife. In one cited example, water truck drivers make deliveries – but only if customers promise to vote for certain local candidates. – AFP

This is a microcosm of what will happen in many other parts of the world, including South Africa.  A natural disaster such a drought or flood (whether attributed to man-induced climate change or not) can be the tipping point for the world’s over-utilised water supplies.  Non-violent feuds over water resources will boil over into deadly fighting; water wars and water will increasingly be tied to politics.  Become more water independent by installing water conservation systems such as grey water recycling and rainwater harvesting tanks.