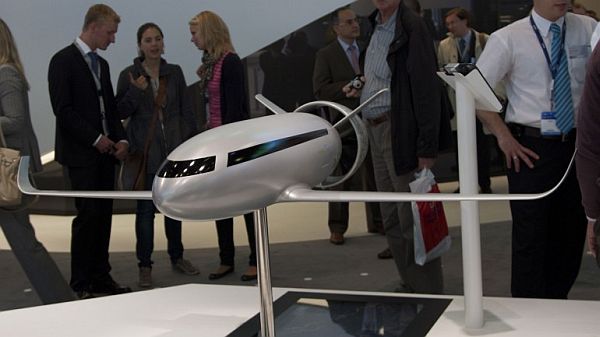 The other ZEHST (zero-emission hypersonic airliner) model that was unveiled at the Paris Air Show 2011 was EADS’ VoltAir. VoltAir is an electricity-driven aircraft that could actually rule the skies in the next 25 years. This futuristic and innovative, all-electric airliner will function on two modified lithium air batteries that will have the capacity to power two extremely efficient electric superconducting motors. These motors will then run the two counter-rotating co-axial shrouded propellers located at the rear end of the airliner.

Low weight (as it will be made out of carbon fiber), composite design and powerful aerodynamics will provide VoltAir an edge over regular aircraft as it can be propelled with ease. The batteries of VoltAir will be rechargeable and the turnaround time will be similar to the regular aircraft that require re-fuelling. However, studies are still being conducted for VoltAir, as electric motors lack the capability of providing high-power density for commercial aircraft. But with the advancement in the area of HTS (high-temperature superconducting) material, EADS is hopeful of finding a solution for the same. The traditional copper coil wire will be replaced by the HTS wiring in VoltAir that will lead to zero loss of electric power. VoltAir is a futuristic, generation-next aircraft that will not only facilitate an environmentally-friendly ride but will also provide a solution to our depleting oil reserves.