The subsurface water system can be divided into an unsaturated (vadose) zone that normally has air-filled spaces, and a saturated zone in which all available spaces are filled with groundwater.  Soil is an important component of the unsaturated zone, and the properties of a soil, especially its texture and structure, affect both its ability to retain water and its hydraulic conductivity.

If percolating water encounters an impermeable layer in the unsaturated zone, it may accumulate or move down inclines as interflow, but this is usually a minor and intermittent flux compared with percolation to the saturated zone.  Within the saturated zone, groundwater is usually held in strata of porous rock called aquifers, of which there are two main types – confined aquifers and unconfined aquifers.  Two other types occur in some areas: (a) a ‘leaky’ aquifer is partially confined below a semi-impervious layer, above which an unconfined aquifer is also present, and (b) a karst aquifer consists of a fractured rather than a porous rock. 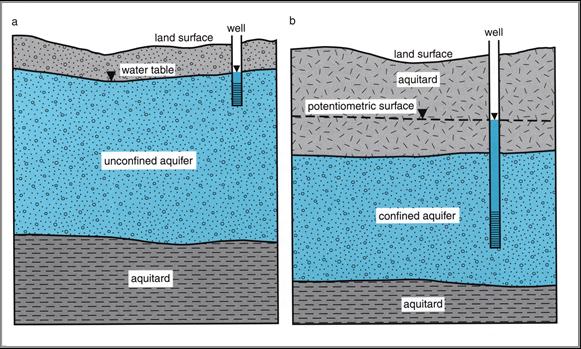 Globally, groundwater constitutes c. 97% of all liquid fresh water.  The storage capacity of an aquifer depends largely on dimensions and porosity – and many strata (e.g. clays and shales) are not usually classed as aquifers because the porous material is thin (<50m). and the groundwater supply tends to be small and unreliable during droughts.

Groundwater flows down inclines but flow rates are generally slow, rarely exceeding 10m/day and sometimes less than 1m/year.  Moreover, the deeper in the aquifer the water is, the more slowly it moves.  Water can move a short distance upwards from a water table by capilliary rise and can be drawn further upwards by ‘evaporative pull’ (exerted by evapotranspiration).  However, groundwater cannot reach the surface from the deep water tables; and in these situations (a) it is not available to vegetation, and (b) abstraction requires pumping.  In some places, it reaches ground level and emerges as a spring, or seeps directly into a watercourse or water body.

In many catchments, groundwater and surface water levels are intimately linked, and groundwater is responsible for river baseflows which continue when there is has been little rainfall for some time.  In these systems, river low flows during droughts can be partly due to over-abstraction of groundwater.

Groundwater is also often important in supporting wetland ecosystems which are therefore threatened by groundwater depletion.

Groundwater is to play a key role in water scarce South Africa.  However, over-abstraction of groundwater is already occurring worldwide and in South Africa.  Pressure should be taken off our groundwater reserves by implementing water conservation systems such as grey water recycling and rainwater harvesting.  Rainwater harvesting can rejuvenate wetlands as well as groundwater.  These are a few reasons why there should be no shale gas exploration or ‘fracking‘ in the Karoo or anywhere, as the fracking process will pollute our precious groundwater reserves.