Among the oft-repeated arguments against wind power — that it is intermittent, unreliable, expensive, noisy, dangerous to wildlife, or aesthetically unappealing — one argument you will not hear from wind power detractors is that wind uses too much water. Why? Because wind uses a fraction of the water used by every other electrical power source per unit of energy produced (also known as ‘water intensity’). But to be perfectly frank, wind power’s stinginess with water usage is not something the wind industry has ever pressed very hard. That is, until now (and for at least one day).

On March 22, World Water Day, the wind industry took the opportunity remind everyone that not only is wind power less water intensive in an increasingly water-scarce world, but that policymakers need to consider the water consumption (and cost) of that plant today and for decades to come.

“Unlike most other power sources, which consume huge amounts of water that could be used much more productively for human consumption and agriculture, wind power generation does not use any water,” said Steve Sawyer, Secretary General of the Global Wind Energy Council, the leading international wind industry trade group, in a statement Tuesday.

Whereas the more than three-quarters of the current global electricity capacity requires water for cooling and condensing steam that ultimately drives turbines to generate electricity in conventional fossil fuel and nuclear power plants, wind power generation requires practically no water. Even most solar photovoltaic systems require some water to keep the panels clean and operating at peak efficiency (although this is not represented in the graph).

How much water are we talking about? While nuclear and certain types of coal and natural gas power generation will consume somewhere around 3 cubic meters of water per megawatt hour (3m3/MWh), wind uses 0.0 cubic meters of water, according to research from Danish wind energy giant, Vestas Wind.

All tolled, the U.S. Department of Energy estimates that 20 percent of wind power on the U.S. grid by 2030 would save as much as 4 trillion gallons of water.

But the implications may be even more important for emerging economies where water and electricity scarcity already go hand-in-hand. If 40 percent of the world’s population already lives in water-stressed areas and populations in these areas grow and develop using traditional fossil-fueled plants, the water needed to operate the plants will put additional strains on a system already stretched thin. Under a business-as-usual scenario, according to a report by the Water Resources Group , global water demand is predicted to outpace water supply by 40 percent by 2030.

The long and short of it is that, except in ideal conditions, wind power is not a panacea and by no means represents the perfect stand-alone power source. But wind power also doesn’t require massive amounts of water to generate electricity, and that is a fact that is both undersold by the wind industry and undervalued by many policy makers and wind power opponents. 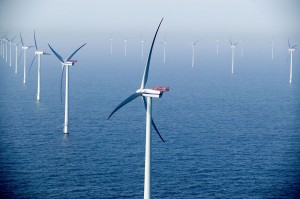 If parts of the world that are facing water scarcity are also places with wind energy resources suitable for scalable wind power development, it is not only in the wind industry’s best interest that there be a mechanism that both: a) Recognizes and properly values current and future cost of water (both in terms of financial cost and socio-ecological cost), and; b) Provides loan guarantees, community wind financing and/or other technical, logistical and infrastructural support to get wind energy capacity online where it is most needed and appropriate, it is in the best interest of multiple, overlapping systems of economic, social, and environmental security.

This is yet another example of how water and energy are linked and how important water is.  Wind power and solar power are undoubtedly the most water-efficient sources of renewable energy and their disadvantages are diminished in a world where water scarcity is increasingly serious.  Domestic wind turbines have a much lower impact on the environment than their huge industrial-sized counterparts.  If you live in windy areas such as along the Southern African coast, domestic wind turbines combined with solar energy systems are an eco-friendly ideal combination.