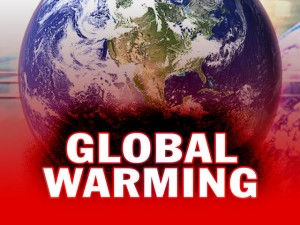 The evidence that humans are causing global warming is strong, but the question of what to do about it remains controversial. Economics, sociology, and politics are all important factors in planning for the future.

Even if we stopped emitting greenhouse gases (GHGs) today, the Earth would still warm by another degree Fahrenheit or so. But what we do from today forward makes a big difference.  Depending on our choices, scientists predict that the Earth could eventually warm by as little as 2.5 degrees or as much as 10 degrees Fahrenheit.

A commonly cited goal is to stabilize GHG concentrations around 450-550 parts per million (ppm), or about twice pre-industrial levels. This is the point at which many believe the most damaging impacts of climate change can be avoided.  Current concentrations are about 380 ppm, which means there isn’t much time to lose.  According to the IPCC, we’d have to reduce GHG emissions by 50% to 80% of what they’re on track to be in the next century to reach this level.

Many people and governments are already working hard to cut greenhouse gases, and everyone can help.

Researchers Stephen Pacala and Robert Socolow at Princeton University have suggested one approach that they call “stabilization wedges.” This means reducing GHG emissions from a variety of sources with technologies available in the next few decades, rather than relying on an enormous change in a single area.  They suggest 7 wedges that could each reduce emissions, and all of them together could hold emissions at approximately current levels for the next 50 years, putting us on a potential path to stabilize around 500 ppm.

There are many possible wedges, including improvements to energy efficiency and vehicle fuel economy (so less energy has to be produced), and increases in wind and solar power, hydrogen produced from renewable sources, biofuels (produced from crops), natural gas, and nuclear power.  There is also the potential to capture the carbon dioxide emitted from fossil fuels and store it underground—a process called “carbon sequestration.”

Some of these technologies have drawbacks, and different communities will make different decisions about how to power their lives, but the good news is that there are a variety of options to put us on a path toward a stable climate.

Individuals have a big role to play in reducing environmental impacts. Start saving water and conserving energy today and lead by example.  It is especially important for children to see their parents being eco-friendly wherever possible.

Contact us for a free quote on a solar geyser, water system, rain water tank or water tank.  Reduce your carbon footprint by switching to green insurance, now available in South Africa.