Ever wondered if it really makes sense to buy a hybrid car? 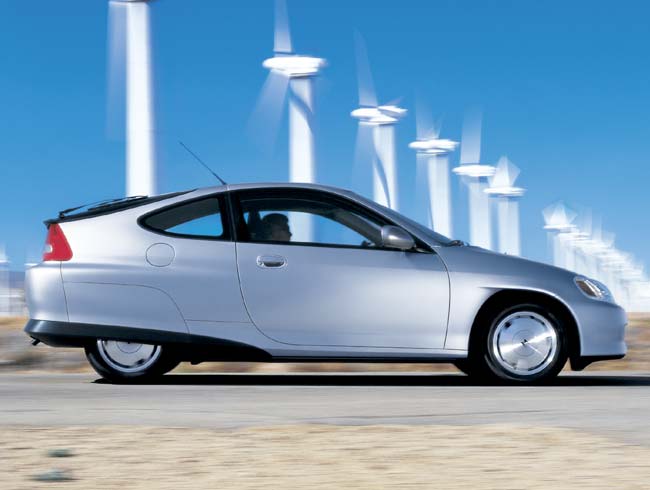 If you’re frustrated with the environmental impact of fossil fuel consumption, as well as paying nearly $4 a gallon at the gas pump, you may want to consider buying a hybrid electric vehicle.

What is a Hybrid?

Hybrids, like Toyota’s popular Prius model, use a combination of a small, gas-powered internal combustion engine and electric motors to power the drivetrain. Electricity is stored in your car’s batteries. A typical car has one battery, to act as a starter and power electric features in your car, such as power windows or locks. A hybrid might have an array of batteries, which do all those things, but also powers the drivetrain itself. The Prius, like many hybrids, has an acceleration and speed threshold where the battery itself can power your car, up to a certain point. When your battery power is spent, or if the car needs to accelerate faster than the battery can handle by itself, the gas engine is fired up and does the work. Many hybrids also feature regenerative braking. This means that the force of your brakes is harnessed by small generators that give your battery a small charge. Your gas engine is also used as a generator to recharge your battery.

Why Get a Hybrid Car? The Advantages:

According to this U.S. Department of Energy guide, the benefits of hybrids can be summarized as follows:

Hybrids offer drastically lower emissions (about 70% less) than gas-powered cars and, since they use electric power, increased gas mileage. Hybrids tend to be more aerodynamic, and are engineered for less drag resistance. Drag increases the amount of work your engine has to do in order to move your car.

Tax incentives are also being offered for the new plug-in hybrids (PHEV) and electric cars. The tax incentives that offered rebates for non-plug-in hybrids have expired. As it stands now, consumers can get anywhere from $2,500 to $7,500 in federal rebates, for PHEVs, depending on the size of the car’s battery. The larger the battery, the more money refunded. For those who convert a gas-powered car into a PHEV will receive 10 per cent of the conversion cost back, with the maximum threshold being $4,000 for a $40,000 conversion, as part of President Obama’s stimulus bill. Lawmakers kept one Bush-era tax credit for buying and installing home charging equipment, with a maximum allotment of $1,000 for individuals and $30,000 for businesses. A run-down of state-by-state incentives can be found on Plugincars.com and an extensive database of incentives can be found on the Department of Energy’s website.

Since hybrids feature more complex and numerous parts and systems than a regular car, manufacturers are offering strong guarantees. Check for individual automakers’ warranties, as technologies and offers are subject to change.

It’s also possible to make back the extra cost of a hybrid vehicle in tax savings. The Honda CR-Z, which runs on gas, has a fuel efficiency of 39 mpg highway and 35 mpg in the city. It retails at $19,200. The Prius, which costs $2,100 more gets 48 mpg highway and 51 mpg in the city, offering a considerable annual savings in gas. The DOE has a MPG calculator that helps you estimate your gas savings over time between two vehicles.

Also, let’s not minimize the satisfaction of doing what’s right for the environment. Exercising your conscience can be much more invigorating than saving money.

The biggest hurdle to wider acceptance of hybrids is cost. New technologies, when first put to market, can be prohibitively expensive for the average consumer. While the technology to produce hybrids has been around for decades, battery innovation has been slowed because car companies were content to build cars that ran on a cheap, relatively plentiful power source: gasoline. With consumers starting to wake up to the dangers of mass gas consumption, which includes increased air pollution and exacerbating climate change, car companies are responding to consumer demand to make energy-efficient vehicles.

But we’re not quite there, yet. One option you may want to consider is buying a used hybrid vehicle. However, the tried-and-true indicators for “kicking the tires” of a prospective used car are a little different when it comes to hybrids. Things you should consider include wear and tear on equipment. It’s one thing to replace a timing belt or muffler. It’s another thing entirely to replace rare, costly components like batteries. See our article here on Used Hybrid Vehicles.

Overall, hybrids are a great choice to help the environment, and they save money. Although tax incentives are changing, prices will come down as hybrids become more prevalent. It can be hard to open your wallet wide to support technological change, but just keep thinking about how much less you’ll be paying at the pump.

Hybrid vehicles and especially the new plug-in hybrids (PHEV) and electric cars, are even more eco-friendly if the electricity used to charge the batteries is generated by renewable energy sources such as solar energy and wind power.  South Africa does not (yet?) have rebates for EV’s and hybrid vehicles and the cost still makes people think twice about buying them.  You don’t necessarily need a ‘green car’ to drive green- see Green Driving Tips as well as The 12 most affordable fuel-efficient new cars.  If you aren’t in the market for a new car just yet, make sure your existing car is as environmentally friendly as possible- read How to green your car.  With fuel prices skyrocketing, it pays, in more ways than one to ‘drive green’.