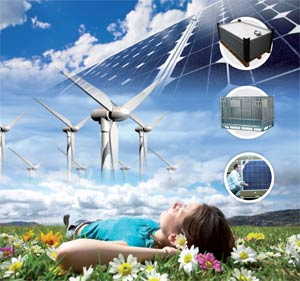 Growing concerns over the threat of climate change, energy security, and rising oil prices have all stirred interest in the development of alternative energy and the race for clean green energy is on.

But before we get caught up in the emotional and political hype, let’s take a hard look at some common myths and real world challenges associated with what it really means to produce green energy:

Renewable energy is all clean & all green: Renewable energy definitely offers the opportunity to reduce carbon dioxide emissions but unfortunately, solar and wind energy generation require huge amounts of land to deliver relatively small amounts of energy relative to fossil fuels. For example, a natural gas well producing 60,000 cubic feet per day generates more than 20 times the energy per square meter of a wind turbine. Shifting to renewable energy will result in a significant “energy sprawl” that will pose challenges for the conservation of biodiversity.

Without Federal Subsidies Renewable Energy Doesn’t Work: It’s true that the renewable energy industry benefits heavily from government incentive programs, but this is true of most energy sectors. For example, according to the Energy Information Administration, in 2007 the United States provided approximately $700 million in subsidies for wind power development, while providing about $800 million in subsidies to the coal industry.

Wind Turbines Are Noisy & Kill a Lot of Birds: While wind turbines do kill birds — estimates suggest wind energy would kill less than 1 million birds per year— this is a very small proportion of the direct human-caused mortality to birds, which has been estimated at 300 – 2,300 million birds per year due to (in descending order of importance) cats, windows in buildings, poison, transmission lines, communication towers, cars, and oil and waste water pits. While they also make noise, according to the U.S. Department of Energy, if you stand about 3 football fields away from a wind farm, the noise would be no more than that of a kitchen refrigerator.

We Can Make Coal Clean: Coal generates more than 50 percent of the electricity used in the US and projections suggest we have enough coal to last us several centuries, but coal-fired power plants also produce about 60 percent of the US’s total sulfur dioxide pollution, 50 percent of its particle pollution and 40 percent of its total CO2 emissions. If there were technologies available to make it “clean” then problem solved, right? Not so fast. A great deal of clean coal technology centers around capturing and storing pollutants that would otherwise be released during burning. For CO2 emissions this will involve pumping the gas down wells to depleted oil fields or other geologic formations deep underground. It’s unclear what ecological consequences this may have nor is it clear how effective it will be. Some have argued that no matter how clean coal burning can be made, mining coal still entails a great deal of impacts not consistent with renewable energy – for example mountaintop-removal mining.

Renewable Energy Gets Us Energy Security: Most people think a shift to renewable energy will reduce our dependence on imports from foreign regimes. While more than 20 countries produce at least 1 million barrels of crude oil per day, China controls between 95 and 100 percent of the elements (known as lanthanides) that are key in the production of high-capacity batteries, hybrid-electric vehicles and wind turbines. Shifting to renewable energy may put all our “energy dependence eggs” in one basket moving from multiple oil exporting nations to China.

Intermittent Availability of Renewable Energy: Like most people when I flip my light switch, turn up my thermostat or turn the ignition in my car I expect the power to flow. For the most part, the continuous supply of energy is possible because of our exploitation of fossil fuels, which are the result of millions of years worth of the sun’s energy stored in the form of coal, oil and gas. In contrast, alternative energy such as solar and wind power are produced only intermittently as the wind blows or the sun shines. If we hope to integrate these energy forms into our current system we will need to overcome the challenges of balancing availability and demand.

Overcoming the Disparity in Energy Density: The main reason fossil fuels remain as the largest component of the world’s energy supply is because they represent a concentrated form of energy. Gasoline for example contains about 80 times as much energy, by weight, as the best lithium-ion battery. Throughout history shifts in energy were driven by the exploitation of more concentrated forms of energy. For example, the shift from wood to coal then coal to petroleum was driven by the fact that coal possesses more energy than wood and petroleum possesses more energy than coal, allowing vehicles to go farther without having to stop for refueling. The consequence of exploiting less dense forms of energy, like renewables, is that larger amounts of resources are needed to provide the same amount of energy. The shift to renewable energy will likely be a constant challenge because of the inherent high resource and land footprint.

Having the Patience to Wait for Alternative Energy to Mature: Take it or leave it, fossil fuels are here to stay! Fossil fuels account for nearly 70 percent of the United States’ electricity production and projections suggest that fossil fuels will still provide about 70 percent of the nation’s electricity in 2030. Whenever possible, cleaner methods of harvesting and using fossil fuels should be adopted, along with increased energy efficiency and reduced consumption. Even if it’s not within the realm of possibilities for renewable sources to take the reins now, it’s also unfair to think they can’t eventually put an end to fossil fuel dependency. We need a serious energy policy that plans for and facilitates this transition. While most people support the use of renewable energy they do not want to see significant increases in what they pay for energy. We can decide to pay higher costs for energy now or continue to invest in fossil fuels and with climate change pay for the decision later… but at what cost?

These thought-provoking statements are perhaps necessary as there are some  that expound the virtues of renewable energy such as solar and wind without mentioning the practical realities and disadvantages. Renewable energy technology is developing at a rapid pace; the quantum leaps in solar panel efficiency over the past few years is an example.  This means solar panels can be made smaller, taking up less space.  Solar  energy ‘farms’ also need not cover valuable, productive land; building rooftops are ideal. Who knows how quickly and what technological breakthroughs may occur in the next 20 years; the challenges and disadvantages will be overcome, it’s just a matter of how soon.