Billions of City Dwellers in Water Shortage by 2050? 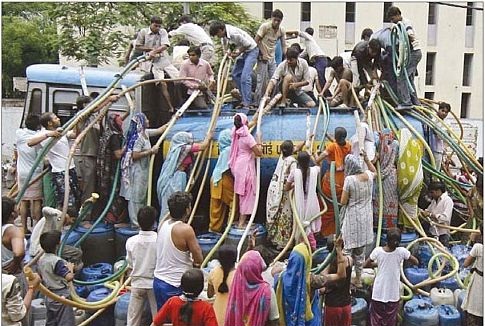 Imagine living on less than a bathtub of water for all your daily needs: drinking, cooking, bathing, washing clothes…and everything else?

By 2050, more than 1 billion city dwellers may be doing just that if we don’t build new infrastructure or begin new water conservation efforts, according to a new study by scientists at The Nature Conservancy and other institutions.

And more than 3 billion may suffer similar water shortages at least one month of every year, says the report. The shortages are projected to hit megacities on every continent, from Manila to Johannesburg to Mumbai.

The minimum amount of water the study assumes every person needs daily is miniscule: Less than 26 gallons — about 2/3 of a bathtub — for all a person’s daily needs. (The average U.S. resident uses 2-5 times that much.)

And what will drive these water shortages? Urban growth and climate change, both which will push water supplies to these cities from rivers and existing water infrastructure to the brink, says Rob McDonald, vanguard scientist at the Conservancy and the study’s lead author.

There’s still time to act on these challenges, adds McDonald — but we just can’t build our way out of the crisis.

”Some new infrastructure will be needed, of course — that’s the classic way cities have solved water shortages,” McDonald says. “But especially in parts of the world where there’s lots of cities, just going out farther or digging deeper to get water can’t be the only solution. Cities will need to get smarter and more efficient about how they use water, and recognize the role that natural places in the uplands play in supplying clean water to cities in the lowlands.”

Facing Shortages: Big Cities from Beijing to Delhi — And Nature, Too

The report, released today in the journal PNAS, looks only at water availability within a metropolitan region. Many more people lack access to clean water if problems of inadequate water quality or delivery within cities are taken into account.

To define “water shortage,” McDonald and his coauthors (including Conservancy scientist Carmen Revenga) used a standard of 100 liters per person per day — which the World Health Organization says is the minimum a person needs for “optimum” long-term health and sanitation.

Using this number, the study looked at water supplies, climate trends and population growth for cities in the developing world, where urban growth is fastest worldwide.

The researchers found that urban growth — from migration to cities and growth in urban population — will account for most of the big projected increases in water shortage.

But climate change may force an additional 100 million more people to live without adequate supplies of water year-round, unless cities are able to adjust their water supply systems in time.

By 2050, big cities that will not have enough water available nearby include Beijing, Delhi, Mexico City, Lagos and Tehran. (See below for a list of the 20 most populous cities to be affected.)

Those cities with potential seasonal water shortages will be much more widespread, however — on all continents and in many different climates. China and India will be particularly hard hit unless significant new efforts are taken by their cities, according to McDonald.

But cities won’t be the only victim. Rivers, lakes, wetlands and other freshwater ecosystems near these cities will likely also be impacted by 2050.

“Our analysis basically assumed that cities could drink surface waters dry,” says McDonald. “And that kind of extreme water withdrawal has obvious effects on the critters that live in the water. We point to a few special places on the globe, like the Western Ghats in India, where there is an amazing amount of rare fish species and also an amazing amount of urban growth.”

The number of people projected to lack sufficient water drops substantially once the researchers include the water cities might be able to draw from the area 100 kilometers around them, instead of just the metropolitan area.

McDonald says cities commonly transport water longer distances to get around water shortages, and that other strategies include desalinization or unsustainably pumping groundwater. The problem with all these strategies? They cost money.

”One study estimated that the world will have to spend $180 billion a year to meet its urban water needs,” says McDonald. “Whatever the real figure is, there’s a serious issue here the world needs to pay attention to. In this paper, we are showing the scope of that problem, and trying to remind planners that there are more ways to solve the problem than just building more dams.”

Instead, says McDonald, urban water managers and city planners should look at solutions that involve nature. One solution: more efficient water use by agriculture and industry — two of the biggest users of water worldwide.

Payments to farmers to reduce areas of irrigated agriculture might be another partial solution, as well as removal of non-native water-hungry vegetation such as eucalyptus.

“There’s a real shortfall in investment right now in solving this problem, and the developed countries in my opinion need to play a larger role in helping close that shortfall.”

20 biggest cities who in 2050 will suffer from perennial water shortage, as defined in the paper (note they are getting water from somewhere, just not sustainable flows of surface or groundwater within 100km). This includes demographic growth and climate change effects:

South Africa take note: Johannesburg has been included in the top 20 list of cities that face critical water shortages.  Many other South African towns and cities will face a similar situation.  We cannot rely on the current government to provide everyone with clean water, as water infrastructure continues to crumble.  Experts predict a major water crisis by 2020 in South Africa in a country where water security is already an acute problem.  Homeowners and businesses need to prepare by investing in water conservation systems such as rainwater harvesting and greywater systems as well as implementing water-saving habits.

South Africa saved 350 MW during Earth Hour
FRACKING: Drink the Water at Your Own Risk