By admin on February 2, 2011 in fracking, green energy, natural gas 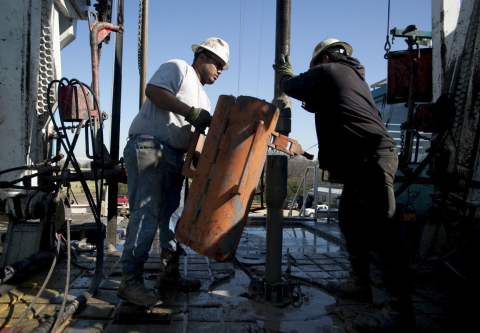 Tapping natural gas in Texas. The green bona fides of the energy source are coming under increased scrutiny.

Natural gas has long enjoyed a clean-and-green reputation — at least in comparison with coal, its brethren fossil fuel and most immediate substitute in the electricity-generation game. And of course, T. Boone Pickens and others would like to see natural gas replace oil as the chief source for the nation’s transportation fuels.

Many prominent environmental groups, too, have helped to outfit natural gas with a green mantle, often describing it as a vital “bridge” fuel to a cleaner energy future dominated by renewable sources of power like wind and solar energy.

But with increased scrutiny from regulators, more communities’ being directly exposed to natural gas exploration, and questions arising about the fuel’s global climate benefits, a more variegated view of natural gas is emerging.

Erik Schlenker-Goodrich, an attorney with the Western Environmental Law Center who has fought for tighter regulation of natural gas drillers, put it to me this way: “If natural gas is a bridge fuel, how long and wide is that bridge? Right now, the propaganda suggests a wide, long bridge where natural gas is imported, exported, used for transportation fleets, electricity generation, and other purposes for nearly a 100 years.”

Is that really a wise allocation of limited public and private capital, whether public or private? What are the true life-cycle greenhouse emissions of natural gas production and combustion? What, in light of those life-cycle emissions, is the consequence of relying on natural gas for 100 years at that level of intensity in terms of total greenhouse gas concentrations in our atmosphere? In particular relative to the near term potency of methane relative to carbon dioxide (105 times as strong as CO2 in a near-term 20-year time period)? What about the consequence to the people, lands, and waters where natural gas is located that are, right now, increasingly impacted by climate change?

Indeed, the global climate benefits of natural gas have been coming under increased scrutiny for some time now — with the most recent entry coming from the investigative journalism nonprofit ProPublica.

Advocates for natural gas routinely assert that it produces 50 percent less greenhouse gases than coal and is a significant step toward a greener energy future. But those assumptions are based on emissions from the tailpipe or smokestack and don’t account for the methane and other pollution emitted when gas is extracted and piped to power plants and other customers. …

When all these emissions are counted, gas may be as little as 25 percent cleaner than coal, or perhaps even less.

The natural gas industry quickly sought to discredit the ProPublica report, prompting a point-by-point response to the industry’s claims by ProPublica on Monday evening.

Meanwhile, in Tuesday’s Times, I report on the latest turn in the ongoing debate over more parochial forms of pollution. Three Democratic members of Congress leveled charges that at least some gas industry practices between 2005 and 2009 may have violated federal protections for drinking water.

The legislators queried 14 oil and gas service companies for information on the fluids they use during a process known as hydraulic fracturing, or fracking — the underground injection of water, sand and chemicals under high pressure to break up rock and ease the release of hydrocarbons.

Among the most troubling additives to fracking fluid is diesel fuel, not least because it contains chemicals like benzene, a known carcinogen. Drilling service companies have long argued that diesel is no longer used as part of fracking operations, or that its use has been sharply curtailed.

The Web site Energy In Depth, which is paid for and operated by representatives of the natural gas industry, for example, took issue last year with a study from the Environmental Working Group suggesting that diesel fuel or its components continue to be used in hydraulic fracturing.

“Today, diesel fuel is simply not used in fracturing operations,” the industry stated unequivocally. “Except in the trucks, of course – they still need diesel to run.”

But that’s not what was reported to Congressional investigators. In a letter sent on Monday to the Environmental Protection Agency, the legislators said that the companies they queried reported using 32.2 million gallons of diesel fuel, or fluids containing diesel, between 2005 and 2009. Each case, the letter stated, appeared to be a violation of the Safe Drinking Water Act.

As you might guess, whether or not that’s technically true is a matter that will see much deliberation and legalistic parsing over coming weeks. Stay tuned.

Natural gas may be greener than other fossil fuels but this does not mean that we should accept it as a long term fuel source (for reasons as stated above).  The proposed ‘fracking’ by Shell in the Karoo is highly controversial and it is doubtful that the potential benefits will outweigh the severe environmental damage that may occur.