Why Most Of Our “Natural” Disasters Aren’t Natural At All

From the point of view of many humans, the term “natural disaster” is a convenient scapegoat because it allows a person (or a whole nation) to blame nature for their own poor planning. 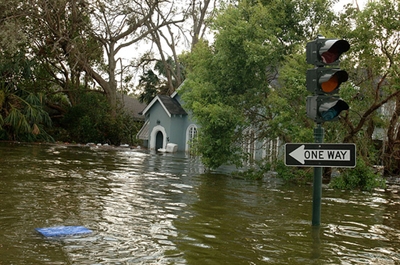 Wherever we find so-called “natural disasters” around the world (such as Brazil at the moment), we also usually find a large group of people who have cut down the forests that buffer rainfall, paved over the grasslands that allow rain to soak into the soil, and built their homes right in the middle of gullies and natural drainage channels. When the floods come, they look to the sky and curse Mother Nature, shouting, “We got hit by a natural disaster!”

But getting wiped out by a flood because you built your house right in the flood path of a local river is not a natural disaster. That’s a man-made disaster. Or, more accurately, it’s just poor planning on the part of short-sighted humans. And when it comes to disasters, there’s plenty of short-sightedness to go around these days.

When I lived in Ecuador, I witnessed all sorts of homes being built right in the drainage pathways and low-lying flood zones of rivers with a known history of flooding. Even back in the United States, the federal government actually encourages people to build homes in flood zones and hurricane zones by offering “federal flood insurance” which is for the most part a way for the taxpayers to subsidize the risk of those who live in homes that never should have been built in those areas in the first place.

The entire fiasco of rebuilding the low-lying regions of New Orleans after Hurricane Katrina is a perfect example of mankind just begging to be hit with yet another “natural disaster.” It doesn’t take a genius to figure out that some time in the next 50 years, a category five hurricane is going to strike New Orleans yet again and reclaim the very same regions that technically belong under water as part of the Gulf of Mexico. (This is in no way meant to disparage the people of New Orleans, by the way, who are some of the most joyful and creative people you’ll ever meet. Great folks. Sad geologic situation, however. You can’t fight geology for long…)

Forest fires should never be a surprise

The most striking example of so-called “natural disasters” is when people build their homes in a giant forest, surrounded by trees, and then they seem surprised when those trees catch on fire and burn their homes to the ground. Did they really think that trees never burn? Do people honestly buy multi-million dollar homes in California and think that their homes will somehow be magically immune to the forest fires that inevitably sweep through all forests?

I don’t mean to make light of the loss of property and the human suffering that occurs during such events, but wouldn’t all that loss have been prevented if they thought more carefully about the situation in the first place?

Even the news gets it wrong. They’ll report things like, “The fire caused over $200 million in property damage…” Well, not exactly. The forest fire burned where it has always burned, every few decades, for probably tens of thousands of years. Fires are, in fact, crucial for the healthy functioning of forest ecosystems. And until humans started building homes in forest fire zones, those fires never caused any so-called “property damage.” So why is the fire to blame for destroying homes? Because people built their homes right where the fires burn every few decades!

Once you realize that, you can’t really blame the fire for destroying the homes. It’s not the fault of the fire. People shouldn’t build homes in forest fire zones.

See, when I look at a forest as a potential home site, the very first thing that comes to my mind is, “Sooner or later, these trees are going to burn.” It’s a natural cycle caused by lightning combined with a dry season that follows a wet growing season that produces lots of underbrush “fuel.” All it takes is one lightning strike to light it up, and from there the laws of chemistry take over.

Most “natural” disasters are actually caused by poor human planning. Generally speaking, people don’t have a very long-term view of things. They don’t consider that the little creek running behind their new home could very easily wind up meandering through their living room after record rainfall. The cattle rancher who buys 500 acres of forest and then clear-cuts the trees to make room for cattle grazing (Brazil, anyone?) doesn’t usually consider the fact that they have now removed the rainfall / water buffer zone that protected their lands from floods and erosion.

Even professional city engineers often aren’t very bright about all this: They’ll design cities with enormous areas of pavement and roads, all while failing to properly consider the fact that what used to be dirt which once absorbed water is now concrete that channels water somewhere else. It doesn’t take much rain for a city of pavement to become a flash flood nightmare.

It’s inappropriate for people to use the term “natural disaster” to refer to poor planning on the part of humans. Instead of blaming themselves for building their homes right in the middle of a flash flood zone, too many people blame nature (or God). “Why does God punish us by destroying our home?” they cry. Maybe God was actually sending them an important message: “Don’t build your home in a flood zone.”

Not all floods are the fault of the people affected by them, of course. There are huge floods happening right now in Brisbane, Australia. I haven’t studied the underlying cause of these floods, but they seem completely out of character for the region there. In that case, it means the victims of the floods in Brisbane are suffering through no fault of their own but rather as a result of some destructive global influences on the planet’s weather systems.

Still, now that Brisbane has seen the potential for flooding, watch in amazement over the next twelve months as many Australians rebuild homes right back in the same exact locations devastated by this flood. It’s not a characteristic of good planning. (And it’s not unique to Australians, of course. This happens everywhere in the world, it seems, where people live.)

What “natural disasters” are coming next due to poor human planning?

Here are some of the “natural disasters” I predict will strike our world in the near future. They’ll be blamed on nature, but the real cause is found in human behavior:

• It won’t be too long before our food crops suffer a genetic pollution disaster due to the widespread use of GMOs. Amid global starvation, the GMO scientists will exclaim, “There’s no way we could have foreseen this!” Oh yeah? We warned ya!

• The massive life extinction event occurring right now on our planet will ultimately be traced largely to the mass chemical contamination of the world with pharmaceuticals, industrial chemicals, food additives and synthetic chemicals in consumer products. Already, the bird and fish die-offs are being called “natural” by conventional scientists who don’t see what’s really happening.

• The next great dust bowl will strike within twenty years as abused, over-farmed soils continue to erode, transforming many food-producing regions of the world into food deserts (deserts as in sand, not desserts as in cherry pie). Instead of blaming destructive farming practices, scientists will blame the weather.

• The global use of fossil water — especially in India — will soon meet a geologic limit, causing widespread drought and desertification. This, too, will be blamed on a “natural” disaster (dry spells).

• The massive loss of food pollinators will accelerate, ultimately leading to emergency shortages of pollinators and a detrimental impact on the global food supply. Instead of blaming this on the most likely culprits (GMOs and pesticides), conventional scientists will try to blame viruses or weather events.

… and this list goes on… and on… while humans continue to blame nature instead of looking at the real source of these problems: Ignorant “scientific” progress and boundless human expansion!

Maybe instead of blaming floods, fires and crop failures on Mother Nature (or God), human beings should take responsibility for the impact of their own actions, both individually and collectively.

How to prevent many so-called natural disasters

So how can we avoid these “natural disasters” on a personal level? It’s easier than you think:

– Be mindful of the world around you.

– And especially be wary of contaminating the planet, destroying natural habitat or attempting to alter the natural cycles of nature. The best way to avoid natural disasters is to learn to live in greater harmony with the nature world, respecting its natural cycles of “destruction” which are actually crucial to life on Earth.

As one more quick example, consider large hydroelectric dams and the issue of flooding. Arrogant scientists and engineers promised that such dams would end floods downstream, produce clean energy and lead to a healthier world. They were wrong: By stopping the floods, dams directly interfere with the normal life cycle of virtually all the animals that live downstream. And by halting flooding, they deny the croplands on the banks of the rivers the nutritional replenishment they need to grow healthful, mineral-rich crops.

Much the same is true with forest fires. Humans desperately and ignorantly attempt to extinguish such fires, thereby preserving the forest floor “fuel” that one day ignites into a much stronger blaze that, instead of invigorating the forest, kills it dead. Just look at the history of Yellowstone National Park. It was all the decades of extinguishing fires there that led to the devastating, tree-killing fire of 1988.

Human arrogance at work yet again, thinking that every time a fire or flood occurs, it’s a “natural disaster” that must be halted through human intervention.

The upshot is that many “natural disasters” are really only disasters from the point of view of people who don’t respect nature in the first place.

This article states what many people, even scientists and leaders, do not want to admit publicly.  The truth is that humans are the cause of massive habitat change and climate change.  As a species, we tend to alter the environment to suit us rather than adapting and working with Nature.  History continues to repeat itself and we don’t seem to learn from our past mistakes.  The cycle of endless habitat destruction and abuse cannot go on indefinitely and will lead to our extinction.  Fortunately, Nature does give us warnings and we can become more eco-friendly and move towards saving our planet.  Water conservation and renewable energy use are two areas where individuals can make a difference.