By admin on January 17, 2011 in energy from waste, green technology

Scientists and engineers at the University of the Witwatersrand, in Johannesburg, have developed a hybrid energy solution, based on the Fischer-Tropsch (FT) chemical process, which could be deployed at municipal rubbish dumps to produce both electricity and transport fuels from fresh garbage. 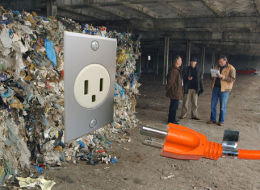 Centre of Material and Process Synthesis (COMPS) director Professor Diane Hildebrandt tells Engineering News Online that the so-called ‘Gate Project’ (Garbage-to-Energy Project) has been proved on a laboratory scale, while the main electricity- and fuel-making components are already in commercial operation in Australia, China, Japan and South Africa.

The proposed solution aims to combine these components into a modular facility capable of dealing with South Africa’s triple challenge of municipal waste disposal, power shortages and unemployment.

COMPS is now seeking investors for a pilot facility in South Africa able to produce 4 MW of electricity and 100 bbl/d of fuel (40% of which would be low-sulphur diesel) using 100 t/d of dry municipal waste.

It is estimated that such a facility could cost about R150-million and take about two years to construct after an investment decision has been made. But, despite this relatively high capital requirement, Hildebrandt is convinced that the facility will be economic, even at prevailing power tariffs of around 42 c/kWh, as well as at current fuel prices. The economics could be improved further if municipalities attach a value to the waste disposal service provided.

The plant’s economics may improve further at a larger scale but with a maximum envisaged waste processing size of 1 000 t/d. A city such as Johannesburg produces about 4 000 t/d of municipal waste, which is currently deposited onto landfill sites.

Hildebrandt, who is also South African research chair in sustainable process engineering and has received continental and international acclaim for her FT research endeavours, says that active steps are being taken, with the support of the Department of Science and Technology, to commercialise the solution.

The process itself hinges on the central deposition of at least 100 t/d of dry municipal waste, which is then sorted into waste suitable for energy conversion and waste that is not useable, but which could still be recycled.

The suitable waste, primarily carbon-bearing organic materials, such as garden waste, as well as other carbon items, such as some contaminated plastics, are treated and pelletised. The fuel pellets are then prossessed through a gasifier to produce synthesis gas, which would become the feed for the FT process to produce liquid fuels. The unused gas and by-products, such as methane, would then be used for power.

The university currently wholly owns the intellectual property and hosts COMPS – a research group that has a specific focus on improving the competitiveness of FT by drawing on the work and expertise of some 40 postgraduate engineering students and about ten professional engineers.

Hildebrandt is eager that the process be initially commercialised at a South African municipal site so as to further entrench the country’s leadership position in FT technology. Through Sasol and PetroSA, South Africa is the world’s largest producer of transport fuels from coal and gas, using FT-based solutions. However, COMPS is also convinced that the process could eventually be exported, particularly to other developing countries.

Should the modular process be proved commercially, various municipalities could facilitate the development of small competitive plants that “turn an environmental problem into an profitable job-creating opportunity”.

COMPS cofounder Professor David Glasser, who oversees the overall commercial activities and development strategies of the centre, says that the Gate Project has already attracted interest from potential investors. However, during 2011, COMPS will intensify its marketing efforts.

Unlike plans by some independent power producers and municipalities to produce electricity from the methane that has built up at landfill sites, the new solution envisages immediately converting fresh garbage into energy. The other unique aspect is the proposed plant’s ability to swing between the production of power and the manufacture of fuel.

University of the Witwatersrand research and development manager Dr Michaela Vrey argues that this ability to swing between electricity and fuel is likely to emerge as a significant commercial advantage, particularly in periods of lower power demand or when the grid is not in a position to handle the capacity arising from distributed power solutions.

She says that the transition from electricity to fuel production, or vice versa, can be achieved in less than 30 minutes.

“Making fuel is also a way of storing energy,” Glasser adds, noting that the energy density of liquid fuels is superior to that of a pumped-storage scheme, or a battery-storage system. “This stored energy could be used for transportation, or even further electricity production.”

Glasser says that the process seeks to minimise carbon emissions, but notes that the carbon emanating is relatively pure and could be used to grow algae that could become a food source for fish.

The only other waste product is a stable vitreous material, which could be deposited or possibly even used as a building material.

“We are excited about the prospects for this technology and about the potential benefits of this project to South Africa and other developing economies. The implementation of small distributed plants potentially provides an economical and a strategic advantage and will allow new and small investors to enter the energy market,” Hildebrandt concludes.

Energy from waste is an excellent and logical way of dealing with trash on our overcrowded planet.  Hopefully cost of setting up waste-to-energy plants is not seen as a stumbling block- we cannot afford not to embrace green technology such as this.