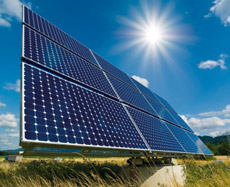 I’ve been working in the renewable energy industry for a couple of years now and while I’m still by no means a technical expert, I’ve picked up a decent working knowledge along the way.

In the time I’ve spent talking with people about solar power, the same sort of myths and misconceptions pop up, some I had myself before I started fiddling with solar energy components.

One of the most prevalent myths is the one that goes something along the lines of “it takes more energy to make a solar panel than it generates during its serviceable lifespan”.

This just isn’t true, even low quality panels, assuming they see out their 20 – 25 year lifespan, will generate far more energy during their life than what went into making them. The average energy payback time varies as it depends on the panel, and where it is used, but 1 – 4 years is the average range. Given the 25+  year life, that’s a lot of extra energy produced.

I used to think that summer would have to be the best time for solar power production; after all the sun is up for longer. This isn’t necessarily so. One of a solar panel’s biggest enemies is heat. The hotter it is, the less efficient they are. A high quality panel will have better heat tolerance (temperature coefficient) than a lower quality one, but it will suffer nonetheless.

If you’re in a region where you experience particularly hot summers, your solar power system will likely crank out the most power during the spring and autumn rather than at the height of summer.

Some people install a grid connect solar power system, that is, one that can export surplus electricity to the mains grid, thinking that during a blackout, as long as the sun is shining they will have power.

Grid connected solar power systems automatically shut down when there is a blackout in the area for safety reasons. Imagine what could happen if a system was exporting power into the grid while workers were trying to fix whatever problems were occurring.

Using a grid connected system in a blackout can be done, but it requires additional (and expensive) components and in some areas, electricity authorities will absolutely refuse to allow these sorts of systems anyway.

They do work. I’m writing this now in 100% overcast conditions and my panel is still working away and cranking out enough clean electricity to power my laptop – and is even putting a little bit into my deep cycle battery (I have a small off-grid system I use when out in the boonies).

Cloudy conditions will negatively impact on production, but it depends on the degree – how much of the light is blocked.

Solar naysayers will sometimes acknowledge the long life of a solar panel, but will raise the spectre of millions of solar panels heading to landfill in a couple of decades. This is a valid concern, however there are already recycling initiatives in development to see this doesn’t happen. Over 90% of a standard solar panel’s weight is material that is recyclable, such as aluminium, glass and the solar cells themselves – there’s money in those old panels!

Sure, the sun isn’t shining all the time, but solar power can and already has proven it can be used to provide baseload power on a substantial scale; that is, a continual and reliable electricity supply 24/7. Molten salt batteries are already in use – these store heat generated by solar power during the day and the heat is used at night to generate steam to power turbines.

Making your own solar panels

This isn’t a myth as such – it can be done. Over the last couple of years there’s been a plethora of information products available online (for a price) that teach you how to make your own solar panels. A couple of things – firstly, the claims made in the advertising of some of these products is way over the top. For example, some of them talk about connecting a home made solar panel to your mains electricity. Safety issues aside, your electricity retailer would have pups if you tried doing this. Utilities will only allow properly accredited and certified equipment to connect to the mains for obvious reasons. Also something to bear in mind is that while you can make a solar panel, it is quite time consuming, so you’ll need to determine if the time put into building one is worth it given the price of solar panels.

Solar power is big business and there’s a lot of questionable marketing around at the moment telling people they can get all the energy they need from an average sized solar power system. This can make solar power seem very cheap, particularly with renewable energy rebates being so widely available.

If an average sized grid connect solar power system is 1.5kW (as it is in Australia), this is possible if you’re really, really, really energy efficient. The fact is most of us aren’t, even the green-leaning folks among us. With so many appliances, gadgets and gizmos in the average home, and if you run an electric stove and hot water system; the 1.5kW solar power system just won’t cut it in a family situation.

The easiest way to * roughly* figure out how big a system you’ll need to offset 100% of your energy use over a full year is to look at your power bill, find out your daily consumption in kilowatt hours, divide that by the average *peak* sun hours a day in your area (lets say 4-5 to be conservative) and that will give you an idea of how big a system you’ll need. If you’re consuming 20 kilowatt hours a day, you’ll be looking at a 4-5kW system.

That calculation is for grid connected systems that will receive at the very least a credit for surplus electricity exported to the grid (it’s called a feed in tariff) to offset the power you’ll still draw from the grid during the night and in particularly adverse weather conditions.

Off-grid systems require battery storage and extra panels, which will add substantially to the cost.

Note: peak sun hours doesn’t refer to hours of daylight, but the average number of hours of sunlight at a sufficient level to produce appreciable quantities of energy.

Also bear in mind the rating of 1.5kW on a system refers to the total of the solar panel output. In a grid connected solar power system, there will be some line loss and loss at the inverter, which is the box that converts the DC voltage from the panels into AC suitable for use in the home.

However, that doesn’t mean to say that installing a 1.5kW system is useless, far from it – consider the energy and greenhouse gas savings over the long term and also the value it will add to your home. I’ve also found that people who install systems tend to become more energy efficient or at the very least, more energy conscious.

Tip: when shopping for a solar power system, instead of letting the salesperson convince you of buying a bigger system, save your bucks and consider other energy efficiency measures you can take that would reduce the size of the system you need. After all, solar power may be comparatively green, but the greenest watt is the one that doesn’t have to be generated.

Solar power isn’t without its issues, but as someone enjoying the benefits of sitting here watching my single solar panel quietly at work and producing all the power I need to write this; it’s sure seems a heck of a lot better than filthy fossil fuel based electricity generation.