By admin on October 25, 2010 in environmental issues, water pollution

A Free State municipality has blamed the contamination of its drinking water on “people throwing building rubble and bicycles” into the water-purification system. 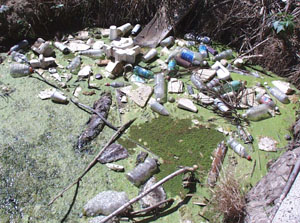 The things humans dump into their source of drinking water

The Moqhaka local municipality, which is responsible for Kroonstad, Steynsrus and Viljoenskroon, in the north-eastern Free State, has been dealing with water shortages and contamination for the past two weeks.

More than 1000 cases of diarrhoea were reported and 350 people were treated at hospitals and clinics.

But provincial health spokesman Jabu Mbalula said the situation had been resolved and people were now receiving clean water.

“After people were complaining of diarrhoea we had tests done on the water, and it showed the water was not being purified. The problem was that the water needed chlorine,” he said.

But the municipality’s technical manager for water supplies, Mike Lelaka, denied on Friday that the contamination of the tap water was due to there being no chemicals, saying: “This can’t be so.”

He said old infrastructure and “continual pipe breakages, as well as people throwing building rubble and bicycles” into the water source was contaminating the water.

“I cannot confirm if the water was making people sick but we are doing everything we can.”

Debbie Shahim, a Moqhaka ward councillor for the DA, said the municipality “knowingly pumped water through the system without chemicals”.

“The situation is because the municipality is in economic distress. There is never money to fix the water problems,” she said.

Shahim said the municipality poured 6t of chlorine into the water to solve the problem.

However, she said, this was only a short-term solution.

Lelaka said the water crisis was “one of those things” and the municipality has “tried to keep the water clean”.

Mbalula said a provincial team has been assigned to the problem “to see what can be done”.

The DA ward councillor for Steynsrus, Albie Viljoen, said a school was forced to send more than 500 children home after 100 pupils were made ill, allegedly by drinking water, last week.

The town is now relying on local farmers and Kroonstad for its water supply.

The water problem comes as Moqhaka is in danger of having its electricity cut.

It is one of five municipalities in the Free State that owes Eskom millions of rands.

This month, Eskom published an advertisement in which it said it would cut Moqhaka’s power on November 8 because of the non-payment of about R45-million.

A spokesman for Premier Ace Magashule said each municipality “must make their own arrangements with Eskom” to pay the arrears.

Dumping refuse and other unwanted goods into water systems seems to be a huge problem in South Africa.  Africa’s rivers continue to be used as waste removal vessels; poor communities along rivers may have limited or zero municipal services but this is no excuse for contaminating the water causing suffering t0 downstream communities.  It seems to be an endemic practice (“out of sight, out of mind”) to knowingly or ignorantly pollute our waters.  Ignorance in rural communities is one thing but when urbanized people contaminate a city’s or town’s own water source, this behaviour beggars belief.  Who would knowingly contaminate the water he/she is likely to drink?  While working as acting Water Control Officer in White River (Mbombela Local Municipality, Mpumalanga), I have found everyday trash dumped into the town’s canal system and other things from toilet seats to used baby nappies to rotten chickens and dead pets (particularly along the canal in the Kings View area of White River).  This section of the canal has had to be fenced for this reason and ‘no dumping’ signs have been erected.  However this has not stopped determined residents from throwing their trash over the fence into the canal!  It seems that there are some incredibly stupid and/or callous people out there who like to call themselves civilized!

In the light of the above, it is a very good idea to filter municipal water and/or obtain your own water supply.  Borehole water should be used sparingly as groundwater supplies are being over-abstracted and groundwater is also becoming contaminated.  Rainwater harvesting is one solution to obtaining your own water supply- it is even possible, in some areas, to become fully water self-sufficient; the limiting factors obviously being rainfall patterns and water storage capacity (rainwater tanks and above- or below-ground reservoirs).  Gray water recycling also reduces water consumption drastically (why use drinking water to flush toilets when waste grey water is available for this?).  Greywater irrigation can also ensure that your garden is watered during times of water restrictions and during the dry season.

Water Rhapsody specializes in water conservation systems that include rainwater systems , rainwater tanks and gray water systems (see the benefits of Water Rhapsody’s systems).  Our water systems can be adapted to small households or to large office blocks, hotels and schools. Should you have questions about our water systems, see rainwater FAQ and grey water FAQ. Our merge with Yes Solar Mpumalanga enables us to offer high quality, German-made Solsquare solar water heating systems (why buy a solar water heater?).  Yes Solar is an official Solsquare distributor in Mpumalanga (White River / Nelspruit areas).  Solar energy is a great renewable energy source for sunny South Africa.  Solsquare solar geysers are Eskom- and SABS-approved and and are installed by qualified solar installers (our solar water heaters are eligible for substantial Eskom solar geyser rebates).  Contact us for a free quote on a solar geyser, water system or JoJo water tank or water tank stand (we are authorized dealers for JoJo Tanks in South Africa and also supply high quality Atlas Plastics water tanks to the Mpumalanga and Limpopo Lowveld).