By admin on September 27, 2010 in grey water recycling, water conservation

Municipalities may soon learn to utilise water of inferior quality for uses such as flushing the toilet in an effort to save drinking water. For example, irrigation in South Africa uses approximately 54% of the total freshwater demand followed by another major user, toilet flushing. Domestic toilet flushing consumes between 50 and 70% of a household’s total drinking water supply. 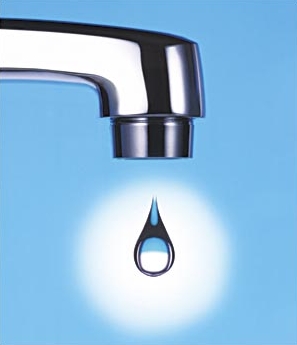 Grey-water from showers, baths, hand basins, laundry tubs and washing machines can provide a solution to our water scarcity challenges. A joint pilot study, conducted by the Universities of Witwatersrand (WITS), Johannesburg (UJ) and Cape Town (UCT), and funded by the Water Research Commission (WRC), is proving that the use of grey-water can be an effective way of saving our high quality water.

Prior to the grey-water tank are two 2 mm sieves that collect any solid materials which find their way from the hand-basins. These sieves are cleaned once a week. Prior to the sieves are two chlorinators that disinfect the grey-water to kill any micro-organisms. “The grey-water tank had to be kept small so that water is used immediately” says Dr Adesola Ilemobade, project leader at the WITS School of Civil and Environmental Engineering. The tank has two submersible pumps for directing water to the toilet when the toilet is flushed, using a switch within the toilet cubicle. Necessary measures were also put in place to avoid backflows.

The first phase of the pilot project is currently used to flush one female and one male toilet at the WITS Hillman Block. “If accepted by South African municipalities, the project will be beneficial to many water-scarce communities” says Dr Ilemobade. “At this stage the reuse of black water (sewage) is not considered due to the potentially higher public health risks” he adds.

A survey that was followed by a massive user awareness campaign at WITS, UJ and UCT indicated a high level of optimism amongst staff and students with the  installation of a dual grey- and drinking water reticulation system on their campuses.

Dr Adesola maintains that the unit will offer several advantages including: the reduction in participating households’/institutions’ drinking water bills; in areas without waterborne sewerage, grey-water reuse may improve the performance of septic tanks; grey-water reuse supports the growth in greener water strategies; and water conservation.

“The next installation is in progress at a 16-room unit of the Student Village residence at the University of Johannesburg Kingsway Campus where the collection of grey-water will be extended to showers and baths within the unit” says Dr Ilemobade.

“Municipalities constrained by finance will be better empowered to provide unserved communities with drinking water systems since the costs of the system will be reduced as a result of the reduced demand for drinking water due to grey-water reuse” says Mr Jay Bhagwan, a Director managing the study at the WRC.

It will further cause reduced effluent discharges to the environment, leaving streams to their natural flow regime.

The grey water system mentioned above was supplied and installed by Water Rhapsody, see the testimonial submitted by Prof. Ilemobade in Our Customers.  This project is an experimental phase of wider implementation of the grey water system on an even larger scale.  The great advantage of Water Rhapsody’s water systems is that they can be adapted to small households or to large office blocks, schools and hotels.  Don’t wait for SA government to implement wide scale grey water reticulation systems as has been done in parts of Australia; you could be waiting for a very long time! Install your own grey water system and use grey water for flushing toilets and watering your garden.  There is absolutely no reason why perfectly good drinking water should be use for toilet flushing or garden irrigation.  To further reduce your water footprint and a logical step to becoming more water independent, install a rainwater harvesting system in your home or business.  Rainwater harvesting can collect huge volumes of water within a relatively short space of time; sometimes the only constraint is water storage capability and space.   Rainwater tanks can store your rainwater for household use or for garden irrigation.  Water Rhapsody’s Grand Opus rainwater harvesting system is a little more sophisticated than the traditional rain barrel. Our rainwater harvesting system integrates with your existing water supply so that you can switch between different water supply sources by simply turning a lever.  Our rainwater harvesting system also allows for the rainwater tanks to be positioned away from the house, out of sight (as opposed to placing the water tank under the eaves- can be aesthetically unpleasing).

Contact us for a FREE QUOTE on a solar water geyser, rainwater harvesting system, gray water system or water tank (we are authorised JoJo Tanks dealers and supply and install the full range of JoJo water tanks and JoJo tank stands).  Our water tank prices are hard to beat in the Mpumalanga & Limpopo Lowveld (we also supply high quality Atlas Plastics water tanks and other Atlas products on request).